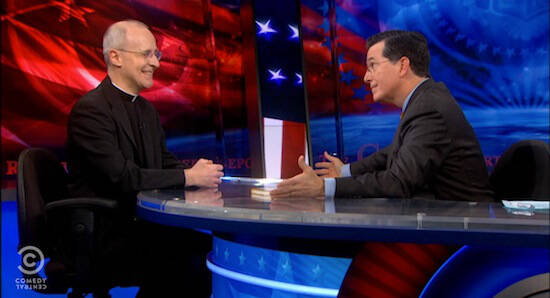 As 'The Colbert Report' comes to an close (its final episode airs tonight, Thursday, December 18), America talks with our own Fr. James Martin, S.J., dubbed "The Colbert Report's Chaplain," about the good humor and effective evangelization of our nation's favorite fake pundit.

1. Tell us about how Stephen Colbert talks about religion, including his own Catholic faith, on the 'Report.' Some have even called him a catechist. Do you see him that way?

Of course, there is Stephen Colbert the person and "Stephen Colbert" the character. And on his show the character "Stephen Colbert" talks frequently about religion and, more specifically, his own Catholicism. He describes himself as the "Most Famous Catholic in America," and demonstrates a vast knowledge of the Catholic faith. In fact, I always smile when I see guests who think that he doesn't know what he's talking about, only to be brought up short by his knowledge. And yes, I do see him very much as a catechist. In fact, he's probably one of the most effective catechists in the American church. As I see it, he evangelizes with humor, and reaches a population--of mainly young, well educated, and sometimes skeptical men and women--who enjoy the way he combines some lighthearted satire of the church with a clear love for his faith. Stephen is, in my mind, an especially good evangelist of the Gospels' emphasis on care for the poor. And he catechizes more people in a few minutes than I could do in a month of homilies.
2. What has your role on the show been (on screen and behind the scenes) and what has it meant to you?
Originally, I was invited onto the show, in 2007, to speak about an op-ed I had done in The New York Times on Mother Teresa. They invited me on several times after that and one day Stephen introduced me as the "Official Chaplain," which made me smile. So I've gone on whenever they've invited me, and I sometimes have helped them locate people who could speak about various religious topics. And it has meant a great deal to me over the years. For one thing, it's a lot of fun! But what made me happiest was knowing that when I spoke with Stephen about God, about Jesus, and about faith, many people were listening. So it was a great opportunity to evangelize. Before I would go on, I would, as I do whenever I am invited on television or radio, pray, "Lord, open my lips and my mouth shall declare your praise."
3. On the Colbert Report, viewers have gotten to know the Stephen Colbert character. What don't they know about the person?
I don't want to break confidences, but I can say that he is an absolutely delightful person.
4. To what do you attribute Colbert's wild popularity? What does the show say about American culture, politics and spirituality?
First of all, the show is funny. You can't underestimate the appeal of good humor. He's also well read, quick-witted and articulate and takes a very dim view of pomposity. Stephen's character, in fact, is a send up of pompous newscasters. His skewering of the powerful was something like what Jesus used to do with the Pharisees. And frankly, the Pharisees wouldn't have stood a chance with him. So people are reacting to someone who is, as we're called to do as Christians, comforting the afflicted and afflicting the comfortable. In the case of this show, it's mainly the latter. As for what the shows says about American culture: satire is always welcome.
5. As a pastor, is there a prayer or parting wisdom you would give Stephen--or anyone else--who is closing one chapter in life, about the begin another?
There is always a little grieving when something ends. All endings are like a little death. So I would say to be sure to take time and grieve the show's end, but also know that in the Christian worldview there is always something new awaiting us. In this case, at CBS.

Here are some clips from Father Jim's appearances on Colbert:

On Heaven and Mirth

Elizabeth Tenety
@etenety
Show Comments (
3
)
Comments are automatically closed two weeks after an article's initial publication. See our comments policy for more.
Nancy Walton-House
7 years 11 months ago
Terrific article and video clips. We will miss the Colbert Report and you as its chaplain. I hope we'll see you on the new show.
Kevin Murphy
7 years 11 months ago
I believe the finest summation of Catholic teaching on abortion can be found in America Magazine. It is called "Standing for the Unborn" and is at http://americamagazine.org/issue/435/faith-focus/standing-unborn. It is a brilliant document. It points out that "A spirit of callous disregard for life shows itself in direct assaults on human life such as abortion and capital punishment, as well as in senseless violence, escalating militarism, racism, xenophobia and the skewed accumulation of wealth and life-sustaining resources." I thought of this document when I read Father Martin's piece. There was no video link to Colbert's famous defense of Planned Parenthood. It was so effective that it earned him a spot on NARAL's top 10 pro-choice comedians. (https://www.facebook.com/naralprochoiceamerica/posts/10151902712969321) Here is the link to Gawker, with the headline "Remembering Stephen Colbert's Legendary Defense of Planned Parenthood." (http://gawker.com/5882285/remembering-stephen-colberts-legendary-defense-of-planned-parenthood) Mr. Colbert has also made light of individuals who have expressed pro-life views, e.g., turning Rick Santorum's mentions of partial-birth abortion into a drinking game. Father Martin states that Mr. Colbert is "an especially good evangelist of the Gospels' emphasis on care for the poor," which I don't doubt. I don't doubt that Colbert is a good man and I'm sure that he is against "capital punishment ...... senseless violence, escalating militarism, racism, xenophobia and the skewed accumulation of wealth and life-sustaining resources.". However, I don't believe you should label someone as "one of the most effective catechists in the American church" who, by his public statements (which are all that can be examined), does not accept all the Church's teachings concerning life. Unless shown otherwise, I don't believe Mr. Colbert has shown, as "Standing for the Unborn" states, "a consistent ethic of life."
Lisa Harris
7 years 11 months ago
Cool blog post! The discussion topic is actually fruitful in favor of me and gives me new ideas. Keep sharing here!Please Visit Watch Dogs Coat