Celebrating the Life of Padre Guadalupe 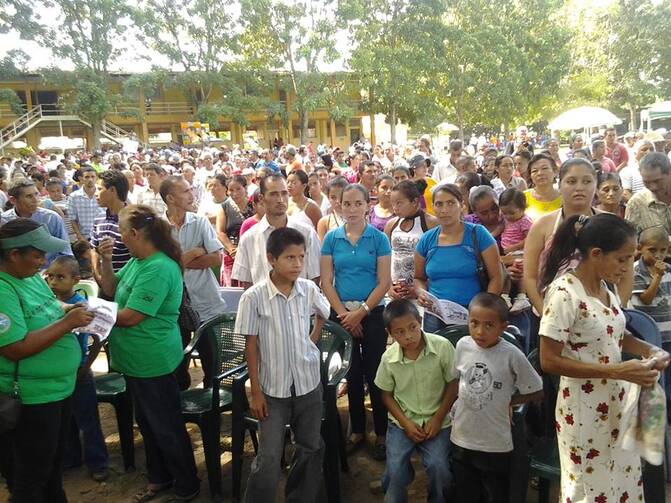 Last month the Jesuits of Honduras and some of their collaborators in ministry—staff members of Radio Progreso and ERIC, a social research and advocacy organization—organized a march and liturgy to celebrate the life and work of Jim “Guadalupe” Carney, S.J. The gathering marked the 30th anniversary of the disappearance of Padre Guadalupe, a Jesuit from the Missouri Province who stood with poor farmers of Honduras against the powerful and wealthy—a struggle that remains relevant for campesinos even today.

I was fortunate to attend the celebration as a member of a delegation sponsored by the Jesuits’ national office in Washington, D.C. We traveled throughout Honduras from Sept. 8-15 to learn more about Jesuit ministries in the country and how local communities are responding to the many challenges facing the country at this time. Luke Hansen, S.J., an associate editor of America, also participated in the delegation and wrote two reflections from Honduras: “Report from Honduras” (9/12) and “A Dark Night in Honduras” (9/13). (Photos are available here.)

More than 500 campesinos, community leaders, parishioners, human rights workers, women’s rights advocates and family members marched through the streets of El Progreso on Sept. 14 singing songs and echoing chants that honored the life of Padre Guadalupe. They said: Padre Guadalupe vive(“Father Guadalupe lives”) and la lucha sigue, sigue (“the struggle continues”). Communities gathered from across the country, including one group that began walking at four in the morning in order to arrive for the march on time. Groups marched behind banners proclaiming their parish or group affiliation, including St. Ignatius Parish in El Progreso, the Forum of Women for Life and the community of Guadalupe Carney in the Bajo Aguán valley.

The march concluded at the campus of a Fe y Alegria school for a Mass. As groups arrived at the school they hung their banners on fences, trees and soccer goal posts around the field, reminiscent of the banners displaying the names of U.S. Jesuit high schools, colleges and universities at the annual Ignatian Family Teach-in for Justice in Washington, D.C.

Padre Juan Jose Colato, a Honduran Jesuit serving dozens of communities in Tocoa, was the main celebrant for the liturgy. He reminded the community that good fruit cannot come from a heart that is sick and full of hate, anger and vengeance. He said that God has a huge heart that is full of solidarity. Padre Colato prayed that those gathered would help bring about a Honduras of peace and justice, recognizing the challenge of those in poverty to live in hope. Following Mass, the celebration continued with a festival showcasing the music, dance and history of Honduras.

Padre Colato emphasized that Padre Guadalupe Carney was persecuted because of his ideas for a new society—a place where all can prosper in life and where the hopes of the poor are not excluded. The Jesuits of Honduras and the social ministries of Radio Progresso and ERIC continue to take steps to move communities in this direction.

Radio Progreso has published photos of the celebration and produced the following video:

Nicholas Napolitano is provincial assistant for social ministries for the Maryland, New York and New England Provinces of the Society of Jesus.