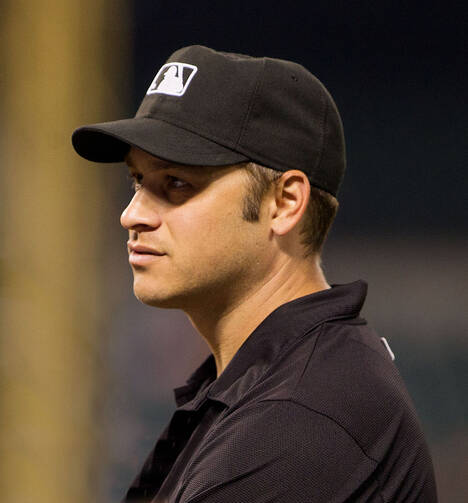 Mark Wegner is a Tampa-based Major League Baseball umpire. He worked in the National League from 1998 to 1999, and throughout both major leagues since 2000. Wearing number 14 on his jersey, he has umpired in seven Division Series between 2003 and 2013, in the 2007 National League Championship Series, the 2008 All-Star game and the 2013 World Series.

Mr. Wegner is a husband and father of five children. He is also a lifelong Catholic who practices his faith daily. On July 29, I interviewed him by telephone about the intersection between his Catholicism and career in Major League Baseball. The following transcript has been edited for content and length.

You’ve been pretty active in parish life. What makes you feel at home in the Catholic Church?

I’m a cradle Catholic, so I grew up in a family that followed our Catholic faith—not a perfect family, but one that went to Mass every Sunday. Traveling all over the place, I go to churches all over the country, and I can walk into any Mass and feel like I’m at home. It’s an important part of my day when I can find peace. I struggle to have a more consistent prayer life, but I feel like going to daily Mass just gives me a lot of peace. Every church I go to, whether it’s an enormous cathedral or chapel or small room in a building, there’s just something powerful about it. It makes me feel at home and grounds me. It’s just something I got from my parents.

There was a part of my adult life when I was a lukewarm Catholic, going to Mass on Sunday but picking and choosing what to follow. Six or seven years ago, I really started opening up to the faith and trying to follow even the things I didn’t understand, and it’s really changed where I am today. About seven years ago, I started participating in a men’s program in our parish called "That Man is You." It centers on the role of men and importance of fatherhood. You kind of have to look at yourself and see what you’re doing in your life that needs to be challenged or changed. It’s made some incredible changes in my family and marriage.

How has participating in the parish men’s group influenced your life?

I’ve developed some very close friendships. Instead of just talking about sports and the weather with guys when dropping the kids off, I’ve gotten to know guys on a spiritual level who are struggling with a lot of the same things I am. It was an awesome change, and the bottom line is that it was all the things our Catholic faith is teaching that brought me back on track to where I needed to be in my life.

Has your faith changed or evolved during your 16 years as a Major League Baseball umpire?

Yeah, absolutely. I was 26 when I first came to the big leagues. Obviously, between 26 and 42 a lot of changes are going to happen, and they certainly have. Most of it really began with this program in my parish. I’ve been going to daily Mass for a long time now.

Well, the Mass is probably the main avenue of prayer that I look to daily. It’s one of the great blessings of our Catholic faith, when I’m on the road, that there are all kinds of churches to go to for daily Mass. So there are just all sorts of opportunities. I try to say a rosary each day. I like it when it’s part of my life, although sometimes I struggle with keeping my focus during it.

You and your wife have five kids. How does Catholicism influence your approach to being a husband and father?

To me, I would say that one of the great blessings of our Catholic faith is that there are lots of guidelines. We often don’t like rules, but I firmly believe that in opening up to these things I’ve found a lot of blessings. There’s a lot to figure out, but I know that passing my faith on to my family is one of my greatest responsibilities, and that certainly guides me as a husband and father. Number one, I have to live out my faith in my own relationship with God. That’s the only way I can pass it on. Number two, I need to communicate with my kids about their faith and teach it to them as their father, because we live in a world that overwhelms them with wrong information.

My kids play sports, which were just a few times a week when I was a kid. Now sports are eight days a week, twice a day sometimes, and you’re supposed to be training on your own. There’s no time for Mass. But we’ve told each soccer coach that our son is Catholic and needs to go to Sunday Mass on the weekend, no matter what the time, and he’ll miss the soccer game if he has to. We haven’t missed one yet, but I think it’s sad that they make it very difficult to go. If we put sports ahead of going to Mass on Sunday, I’m in big trouble as a father!

You joined the Major League staff in 1999, but you started umpiring Little League games in college. What draws you to umpiring?

I played baseball my whole life and just really loved playing it, whether it was for a team or in the back yard playing whiffle ball. When I started, I needed extra money for college and had no real interest in umpiring. But I really enjoyed my first game. It was a lot more difficult than I thought it would be, but I enjoyed it and it was a great way for a 19-year old to make money. I went to umpire school to learn more about it, and really didn’t plan to get into professional baseball, but I ended up going from that school to the minor leagues. So it worked out.

Some people find it hard to practice their Catholic faith in professional sports while being on the road all the time. What keeps you grounded and sustained in your faith when it’s hard to be Catholic?

Again, it’s the sacraments. Mass and confession are important, and obviously prayer is something that I’m continually working on, but finding time for God each day is what helps me. Really, it’s just those basic things that keep me grounded when I’m on the road. It’s tough and it’s a struggle, but there’s no doubt in my mind that my most important job is being a husband and father. Obviously I need to do the best job I can when I step on the field. It’s hard because I’m away from home so much, but I try to trust that God will guide me down the right path.

You were a World Series umpire for the first time in last year’s matchup between the Boston Red Sox and St. Louis Cardinals. What was that like for you?

It was stressful and fun at the same time. It was very exciting, certainly something I’d worked toward in my career, and I was able to bring the family to St. Louis with me. They enjoyed it, but it was extremely stressful. You don’t realize how stressful it is as it’s happening, but you know you have to do your best. Thanks be to God, it went well and it’s a good memory now, but I had a lot of people praying for me! It went well, but it’s a lot of stress to do those games because you know you have to be right, even though you’re human and you make mistakes. But the crew worked well together and it was a great experience, probably even better than I thought it would be. Having my family with me was pretty cool.

What do you hope people take away from your work and life?

What I’m most proud of is being a father, not an umpire. I always wanted to be a father. That’s always been the most important thing to me and it’s still important now. My vocation is to be a husband and father, and I’m proud of that in a good way. I certainly feel blessed to be an umpire, but I don’t feel in any way that that makes me who I am. When I meet with God one day, I think it’s what I did as a husband and father that will matter to him, not how many World Series games I worked or what calls I got right or wrong. It’s what I did as a father. I hope the focus is on the example I give as a father, husband and hopefully grandfather one day.

The world we live in is so enamored with sports and worldly successes, it can be really easy to get lost and think you’re doing good because the world says you’re a success. But we can easily find ourselves far away from where God wants us to be. I haven’t got it all figured out, but I worry about my kids being bombarded with the wrong things. I think there was a time when right and wrong was clear in society and today it’s a little more blurry. Sometimes the wrong things are looked at as good things these days. So I think it’s really important for parents, especially fathers, to pass on the truth to their kids. And there’s no better way of doing that than through our Catholic faith.

There’s only one way to pass something on, and that’s if you’re living it yourself. My parish group “That Man is You” gets its name from the story of the prophet Nathan and King David. Who is going to raise your kids and pass on the faith? That man is you. If you sit back and do nothing, your kids get bombarded and fall onto the wrong path, which is a scary thing. If I’m putting other things ahead of God, I’m passing on a lukewarm faith to my kids, and that might be even worse than no faith at all. Right now I’m not passing it on perfectly, because I fall and make mistakes, but I try to ask forgiveness and keep my priorities in all of the choices I make.

Sean Salai
Show Comments (
1
)
Comments are automatically closed two weeks after an article's initial publication. See our comments policy for more.
ron chandonia
7 years 5 months ago
This summer Sean Salai has contributed one thought-provoking "behind the scenes" report after another on the American Catholic landscape. Thank you!