The Bishop Who Was Set Free 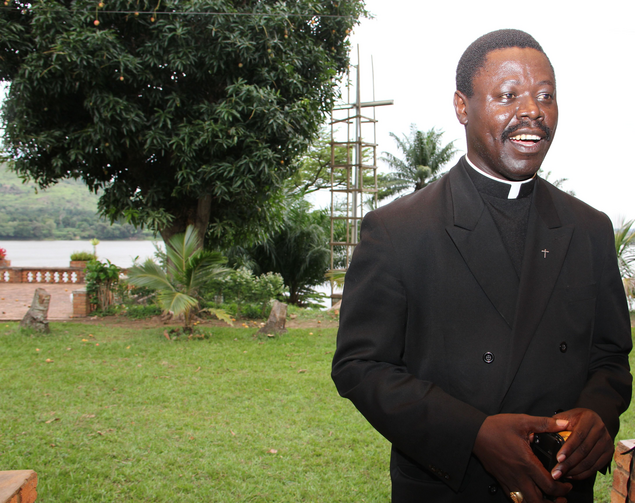 “The general security situation in this country is awful,” says Msgr. Nestor-Désiré Nongo-Aziagbia, bishop of Bossangoa in the Central African Republic.

Behind him, across the grounds of the archbishop’s residence in Bangui where he is visiting in early May, the Ubangi river drifts serenely between the Democratic Republic of Congo and the Central African Republic as men in dugout canoes ferry people and products from one side to the other. This night in Bangui would probably be little different from many of the others in recent weeks. The overall level of violence has declined a great deal since anti-balaka and Seleka forces were in open combat in February and March, but each day brings new outrages against some unfortunate Christian or Muslim man from one side or the other and a new round of reprisal attacks.

Sadly the bishop has had first-hand experience with just how awful the security situation in Central Africa can be. He has personally survived a kidnapping attempt that appeared on its way to a summary execution. Bishop Aziagbia considers himself fortunate to have “national or international status.

“People organized at the national level [and] at the international level for my freedom. Many people in this country wouldn't have the same chance and their deaths would have passed unknown to everybody.”

Traveling northeast, 215 kilometers from Bossangoa to Our Lady of Conception parish at Bantangafo, on April 16, the bishop planned to restore its priests and observe Holy Thursday with the community. Instead he was seized at a roadblock manned by Seleka rebels.

He was brought before a Seleka commander who judged him a spy and an agitator, even a anti-balaka militia leader himself, and driven away by the “colonel” toward the Chad border. This particular Seleka colonel had been in charge during some of the worst of the brutality in Bossongoa and the bishop had clashed with him there.

“He knew me quite well. I often criticized or condemned the various abuses he committed on the population. That did not actually please him,” Bishop Aziagbia says. “I think you understand,” he adds with a smile.

The colonel informed the bishop that his name was on a list of people the local Seleka had been seeking out to “physically eliminate.” Now at this roadblock, “God has made it much easier for us. He pushed you into our hands,” the Seleka colonel told him.

Later, on the road to Chad, with the four men in the back and the angry Seleka Colonel riding shotgun, Bishop Aziagbia began to feel guilty. He understood that he was being driven to some lonely site for an execution because of his role during Bossangoa’s suffering under the Seleka. He regretted that the three priests unlucky enough to be sharing a ride with him appeared destined to share his fate as a result. “I knew the reason why they were after me. I knew the reasons why they were going to kill me, but my three priests did not do any of the wrong I was accused of. I had that guilt on my conscience. Thank God that did not happen.”

Fortunately for Bishop’s Aziagbia’s clearly too-scrupulous conscience, God “pushed” the angry Seleka leader in his turn to another roadblock. There another Seleka colonel with a cooler head and perhaps a better grasp of public relations refused to allow the car-ride to continue any further and removed Bishop Aziagbia and his priests from the angry colonel’s hands. This was the source of no small consternation among the two confronting Seleka commands. The Seleka leader who saved him later told the bishop that the difference of opinion over his fate almost ended in an internecine firefight that evening. “He told me, ‘You are in Kabo [near the border with Chad]. You are safe; nothing will happen to you,” remembers Bishop Aziagbia. “He didn’t allow that other man to take us away because he knew if we went past the town of Kabo, we are dead men.

Bishop Aziagbia was allowed to continue on his previous mission, though stripped of his pectoral cross, his miter, his episcopal ring and his car, and celebrated Holy Thursday in Bantangafo as he originally planned. The next day, Good Friday, a priest from his diocese was gunned down in the street.

Of the future in the Central African Republic, he says, “the challenge is big, but we will not succumb to evil.” The church will continue to speak out against abuses by either side, says Bishop Aziagbia

He adds that the church has offered its protection and support to all displaced people “Muslim and non-Muslim.”

Like other religious leaders, he denies that the conflict is ultimately a religious one, allowing it clearly has religious “undertones.” But for him the violence has erupted out of a complex of competing economic and political interests—pastoralists, newly armed with AK-47s, seek to graze their cattle on the grasslands of Central Africa in conflict with subsistence farmers seeking to raise crops on the same; a brewing fight over the water resources of the Ubangi River and still untapped oil reserves on Central Africa’s side of the border and more. Contributing to the problem has been an unfortunate overflow of a culture of violence and a surplus of cheap weapons from the conflicts aswirl in the nations which surround the Central African Republic.

But if the violence can be explained by larger regional, economic and geo-political forces, it has inevitably expressed in very personal confrontations, like those between one-time neighbors or two men who have stood face to face attempting to negotiate the republic’s new and precarious reality.