On Being a Catholic Novelist: Questions for Deacon Ron Hansen 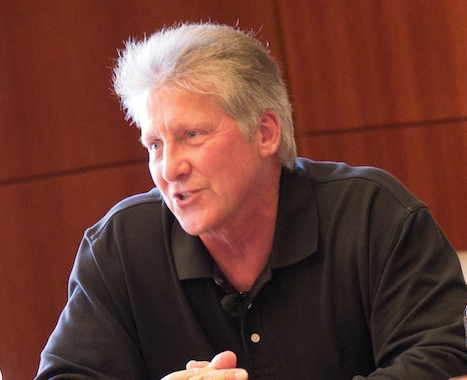 Ron Hansen is an American Catholic novelist, essayist, teacher and deacon. He is the Gerard Manley Hopkins S.J. Professor in the Arts and Humanities at Santa Clara University in California, where he teaches fiction and screenwriting. He holds a B.A. in English from Creighton University, an M.F.A. in Creative Writing from the University of Iowa, and an M.A. in Spirituality from Santa Clara. He is also a graduate of Creighton Jesuit Preparatory School in Omaha, where he was born and raised.

Hansen held the Wallace Stegner Creative Writing Fellowship at Stanford University in 1977-1978. His other fellowships include the National Endowment for the Arts, the John Simon Guggenheim Foundation and the Lyndhurst Foundation. He has won a number of book awards and literary prizes, including an Award in Literature from the American Academy and Institute of Arts and Letters.

Author or editor of more than a dozen works of fiction, including the Hollywood-adapted Assassination of Jesse James by the Coward Robert Ford and acclaimed Mariette in Ecstasy, Hansen is currently on sabbatical from teaching. On July 27, I interviewed him by email about his faith and writing.

What are you currently working on in your sabbatical?

I have used the free time for a lot of travel: a month on the island of Thassos in Greece, which enabled me to visit the Greek Orthodox holy mountain of Athos; then two weeks in Kenya, looking at projects initiated by Catholic Relief Services, for which I'm a Global Fellow; and two weeks in Turkey, which is the setting for the novel-in-progress of my wife, Bo Caldwell. I have also done my usual allotment of hither-and-yon campus visits.

Do you have any major writing projects planned for the future?

I'm currently at work on The Kid, a biographical novel on the short life of Henry McCarty, alias William H. Bonney, alias Billy the Kid. I found it appealing to complete a Western outlaw trilogy to join Desperadoes and The Assassination of Jesse James by the Coward Robert Ford. I'm revisiting a psychological terrain I last walked forty years ago.

You often write about the Old West, including the Jesse James novel that became a Hollywood movie with Brad Pitt in the lead. What draws you to the Old West?

Questions were more fundamental then, and the actions, choices, and consequences were more dramatic. They seem to crystallize for me some contemporary American problems and patterns. And the stories are just so rich.

You’ve spent most of your life in Jesuit educational institutions as a student and teacher. How has the Society of Jesus influenced your life and writing?

Wow, in major, major ways. I pretty much hated school until I encountered Jesuit teaching in high school, I learned to love retreats with them, and I sought out Jesuit professors whenever I could at Creighton University. My first taste of the poetry of Gerard Manley Hopkins, S.J., occurred there in a Modern British Poetry class, and he's been a great influence on me and my writing ever since. My twin brother Rob was a Jesuit in the Wisconsin Province for quite a while so his novitiate and various assignments became familiar to me. I became acquainted with Ignatius's autobiography, which led me to a 19th Annotation Retreat, and finally to the 30-Day Retreat with the Spiritual Exercises at Eastern Point in Massachuetts. Some aspects of Mariette in Ecstasy and Atticus have their origins in experiences during my Master's degree program at Santa Clara. And of course many Jesuits have been mentors and close friends.

You’re now a permanent deacon in your parish. How has your Catholic faith evolved or changed over the years?

At first I was reluctant to carry out any ministry, considering myself unworthy, but I eventually decided I could at least lector. After a while I worked up the gumption to become a eucharistic minister, then I was asked to be a spiritual director for college students on a five-day Ignatian retreat. I found that each greater job in the church was increasingly nourishing. The yoke was easy and the burden was light. And that encouraged me to look into the diaconate program. My faith has evolved insofar as Catholicism and my relationship with God do not seem as difficult as they once were. I'm basically happier and at peace, recognizing my failings and limitations but without despair or self-flagellation.

Who are your role models, living or dead, in the Catholic faith?

My mother first of all, Marvyl Moore Hansen. She was my foundation in the faith; my instructor for all my most common prayers. I was lucky to have three older sisters who shaped me in many ways as has my twin brother. Gerard Manley Hopkins has been a great influence, of course. Thomas Merton. Saint Therese of Lisieux. Scripture scholar Raymond E. Brown. The list could go on.

If you could meet St. Ignatius of Loyola, the Jesuit founder, what would you say to him?

I'd be very interested in getting his take on the present Society of Jesus. In some ways it's so unlike the Company he founded in the 16th century and I can't predict how he would react to those changes.

Although your novels and story collections do not always feature explicit Catholic themes, some people consider you a Catholic writer. In what way is that true of you?

Because of my Catholicism I'm pretty sure Catholic themes or attitudes are at least subterranean in whatever I write. And I suspect many Catholic readers who did not know I was a co-religionist would find an affinity for my fiction without being able to put a finger on why. Certain stances and ways of being just leak through in a book.

What message do you want people to take away from your life and work?

In everyone's life there is something going on here that matters.