Bangui: A Young Man Saved by a Hat 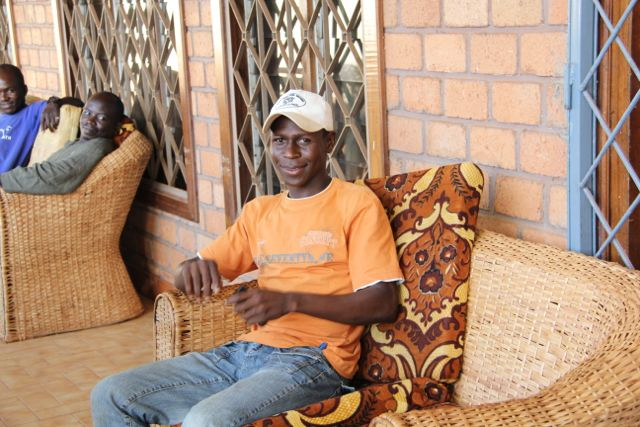 Mohamed Bomassa was saved today by his baseball cap. “Pour la Paix” it reads, he holds it up for a photo. “This protected me,” he says, explaining that for a Muslim youth crossing Bangui, the capital city of the Central African Republic, can be a fatal experience these days. But it is hard to imagine that simple message embossed across a cap was enough to protect this young man from the roving bands of anti-balaka militia.

Bomassa grins widely, not the message he explains. The hat covered the prayer mark on his forehead, a small bump at the top of the head most observant Muslim men acquire from kneeling and resting their heads on prayers rugs five times each day. The small bumps have been used by anti-balakas to identify Muslims on the streets of Bangui.

Which is not to say that Bomassa does not find solace in the message he wears on his hat, spreading it surreptitiously in this manner through this deeply divided community. It’s a message that he takes to his heart and lives in his life every day now in Bangui. As his city and his nation have been torn by strife that has frequently taken on all the ugly characteristics of an inter-religious conflict, he is joining with other young people across religious lines to bring a message of peace and reconciliation to Central African communities now trapped in sometimes deadly cycles of suspicion and recrimination. At 23, Bomassa is already a leader of Bangui’s Muslim community. It is a community that has been brutally diminished in recent weeks. By some estimates as many as 100,000 Muslims lived in Bangui, the capital city of the Central African Republic, before the recent disorder began with the sacking of the city by the Seleka rebellion. Now as few as 3,000 may remain in the city, an encircled and embattled remnant who are deeply uncertain about the future in the republic now that the majority of Muslims have fled to the north or out of the country altogether into Chad.

The Muslims had once represented a thriving commercial class, traders and shop owners who brought commercial essentials and foodstuffs into market in Bangui and throughout the nation. That role so far has remained unfulfilled and as the growing season begins the absence of the Muslim traders may mean a harvest that is sadly diminished for want of seed or cultivation implements.

The outreach of Bomassa’s youth forum has been badly curtailed because of lack of security. Many of the young people have fled with their families. The remaining Muslim members are unable to travel far from what are considered safe communities. Coming across the city to sit for this interview, Bomassa, as he says, put his life in God’s hand. At any moment if he were recognized because of his role or just as a Muslim running into the wrong crowd of youth could have cost him his life. Despite that hard reality, “we want to spread the message that this is not an inter-religious conflict,” says Bomassa. Seleka rebels, first greeted cautiously as potential liberators from a dysfunctional government, soon betrayed their true interests, swarming through the city, looting entire quarters of Bangui freely and murdering any who resisted or who simply got in their way. The anti-balaka, Bomassa explains, raging against the Seleka, have targeted the wrong people, the more or less defenseless Muslim community. Now stand-offs persist in Seleka controlled neighborhoods of Bangui and tit-for-tat killings occur almost daily. Just the day before a mob murdered a mutilated a young Muslim man who had been attempting to return to his home. Some have suggested the body parts removed from the corpse were cannibalized. A reprisal that night claimed the lives of two people from a Christian neighborhood, according to press reports.

Those Muslims, like Bomassa, who remain wish to stay in the Central African Republic. Despite the suspicion and hostility of their neighbors, it is the only nation they know. Many have been here for generations. They have no national identity papers from any of the surrounding states. They consider themselves part of the republic. Bomassa is obstinate about staying even though he has lost everything because of the reprisal raids of the anti-balaka. His home and business has been looted. “Fortunately I was not home because I would have been killed,” he says. He and his family have taken refuge in a mixed community of Muslims and Christians which did not succumb to chaos and recrimination as the inter-religious conflict erupted around them.

Bomassa has appeared on local television and beseeched the youth of Bangui in radio broadcasts with Christian youths who join him in appeals to anti-balaka and Muslim gangs to put down their weapons and end the violence. He insists his message is getting through even though the killings have continued.

Mohamed’s family is deeply worried about his too-public stance for peace. Even as he tries to soothe their worries he admits, “Yes, I am afraid.

“When people attack another Muslim in my neighborhood, I am afraid that will happen to me too. But I put my faith in God," he says. "I would rather die trying to do something right than do nothing," he adds, shrugging his shoulders. He seems too wise and too young at the same time.

“I was born here; I’m a Central-African. I can’t understand how the fact of my religious identity can mean that I can be excluded from my society. Everyone should be free to practice their religion. Central Africa belongs to all Central Africans.”