And now: over to our Rome studio. Holy Father?

Tomorrow morning (London time: 0745), Christmas Eve, a little bit of history will be made. It's not clear for whom it is more momentous: the BBC or the papacy. It may be just a one-off, but it's still a milestone in church communications. When Pope Benedict XVI tomorrow gives a three-minute (2:40 mins to be precise) Christmas Eve reflection in the 'Thought for the Day' slot on the BBC's flagship morning radio news program, Today, he will be entering uncharted waters. This is the first time in history that a pope has scripted and broadcast a mainstream item on either TV or radio.

'Thought for the Day' has been running since 1970, offering a reflective and -- here's the remarkable part, religious -- pause in the midst of a fast-paced, hard-hitting, agenda-setting two-hour news broadcast which is listened to by close to 5m people each day. The 'Thought' slot is produced separately from the rest of Today by the BBC's religion and ethics department in Manchester, which each day chooses one of a rolling roster of faith leaders and religious pundits. Normally the Christmas Eve slot is given to the leader of the UK's Anglicans or Catholics, the Archbishop of Canterbury or Westminster. And it is always live. (I have memories of sitting with my former boss, Cardinal Cormac Murphy-O'Connor, with headphones clamped to our ears in a BBC radio van, as he spoke words we had spent some time the day before honing down to the required length.)

They've made an exception this time. The Pope recorded his message  -- which begins with the words, "Recalling with great fondness my four-day visit to the UK" -- in a Vatican Radio studio last Wednesday. Also present were Christine Morgan, editor of 'Thought' for the past eight years (and a producer on it for 23) and the BBC's Rome correspondent, David Willey -- both to the left of the photo, next to the Vatican's spokesman, Fr Federico Lombardi. (Did the Pope have to do more than one take, one wonders, and if so, who asked him to?) 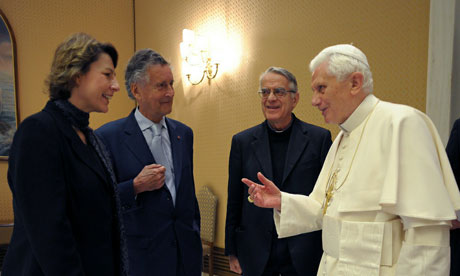 Persuading Pope Benedict to do 'Thought for the Day' has been an ambition of Mark Damizer, controller of Radio 4, for many years, and seemed to many of us an impossible one -- almost like persuading the Queen to do the weather forecast (now, there's an idea. Your Majesty?).

So how did it happen? The answer seems to be -- as often with historic turnarounds -- a combination of factors: the tenacity and professionalism of Christine Morgan and her team at BBC Manchester, and the relationships they have cultivated in Rome with the help of the outgoing UK ambassador, Francis Campbell; as well as, of course, the extraordinary feeling of goodwill generated by September's papal visit. (The Pope's secretary, Mgr Georg Ganswein, recently commented to the Archbishop of Westminster, Vincent Nichols, that the visit put "wind in the Pope's sails").

But I suspect another motive, one that explains why Pope Benedict has chosen 'Thought for the Day' rather than any number of possible alternatives. It has to do with the singularity of the slot, and the place it occupies in the middle of the that most public of UK squares, the Today programme.

Long attacked by secularists for giving a platform to religion when Britain has become (they argue) a country of disbelief, 'Thought for the Day' is a symbol of what the Pope in his speech at Westminster Hall argued to be the necessary interconnectedness of faith and reason. Repairing that breach has been the major task of his pontificate; and it was the major purpose of his UK visit. What better place than 'Thought for the Day', which places the wisdom of faith at the service of public affairs, for the Pope to make his first mainstream broadcast -- a warm, Pauline epistle to the Church he has recently visited to encourage?

Perhaps I am reading too much into it. Perhaps Benedict XVI just thought, "sure, why not?".

Either way, have a listen tomorrow. The BBC are podcasting it and putting the text up almost immediately at the 'Today' website.

Austen Ivereigh
@austeni
Show Comments (
2
)
Comments are automatically closed two weeks after an article's initial publication. See our comments policy for more.
Bill Mazzella
11 years 1 month ago
To quiet the secularists Benedict XVI will do the Proust Questionnaire for Vanity Fair and  it will be administered by Christopher Hitchens. Should Hitchens get struck by lightning, hang himself or get hit by a car, Richard Dawkins will substitute while the late Madalyn Murray will investigate since with atheists all things are possible. There will be no substitute for BXVI as no other infallible person was available or willing.
we vnornm
11 years 1 month ago
B16 follows in the footsteps of CS Lewis who also spoke on the BBC, and, when he began, there were many doubts about how it would go over...bvo