Is Allah Not Our God? 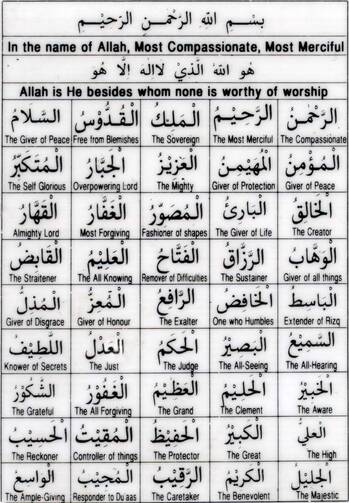 Cape Cod, MA. If you google “Allah” and “Christian” and “Malaysia” together today, you will come up with a number of websites, including the BBC and Wall Street Journal, reporting the news today (October 14) that the Malaysian Court of Appeals has ruled that Christians in that country will no longer be allowed to use the word “Allah” to refer to God. As the BBC reports it, “Upholding the appeal on Monday, chief judge Mohamed Apandi Ali said: ‘The usage of the word Allah is not an integral part of the faith in Christianity. The usage of the word will cause confusion in the community.’” By implication, this Arab word is a Muslim word, not to be used by Christians (or Jews) — as if the Deities of each were different persons. The Christian protests to the contrary, supported by a lower court, were to no avail even if, as Ester Moiji, a Christian put it, “If we are prohibited from using the word Allah then we have to re-translate the whole Bible, if it comes to that.”

I am no expert on Malaysia, its political and religious tensions, and the history of Christianity there, and do not know the languages involved, so I cannot comment further on this particular case. But it does raise the question about the “ownership” of religious language. When does a term become so deeply connected, in one or another with language, with just one religion that it becomes impossible, or politically unacceptable, for other religions to use the same?  In early modernity, Christian missionaries in Asia struggled with this problem, looking into Chinese and Japanese and Sanskrit and other languages, to see if there were words in use locally that could properly communicate the mysteries of the Christian faith. Some efforts were successful, but in India, for instance, straightforward and relatively safe translations — “deva” for “God”, for instance — often communicated the wrong meaning, and reduced the meaning of “God” to something more like a “demi-god.” Conversely, too robust translations — “God” as “Ishwara” or “Bhagavan” — either seemed to identify the Christian God with Shiva or Vishnu (which was, to be sure, more than most missionaries intended) or to be coopting Hindu terminology for a colonial deity arrived from the West. In some cases, missionaries despaired, and opted for transliterations, as when the Holy Spirit remained, even in Asian languages, “Spiritus Sanctus.”

I am guessing that despite the political dimensions of the case in Malaysia, where religious tensions have grown in recent years, there is something of the same difficulty at stake as Muslims and Christians try once again to sort out what they have in common and what divides them. If “Allah” and “God” share the same perfections, superlatives and uniqueness, how could they not be the same Person? Yet if “Allah” has a lineage of revered usage reaching back in Arabic to the holy Qur’an, how could it not seem to pious Muslims that Christians are borrowing/taking over the name of “Islam’s Deity”? Such choices are unfortunate: on the one hand, to use the same word, but without the educational processes in place by which to explain to the wider public how such a word as “Allah,” properly understood with intellectual as well as religious reverence, cannot be a sectarian private property, or on the other, to refrain from using a common name, as if to communicate that the supreme compassionate and loving Being of Islam and the supreme compassionate and loving Being of Christianity (and the supreme compassionate and loving Being of Hinduism as well) are not necessarily one and the same? All of this is another reason for vigorous religious and interreligious education, to help us to avoid bad choices in theology and in politics.

Of course, I concede in closing, the Catholic Church is not immune to this kind of privatization of a popular and more inclusive religious language. It was only a few years ago that Dominus Iesus instructed the world that words such as “faith,” “revelation,” and “sacrament” are to reserved for Christian usage alone, and that even “Church” is a word that most Christian communities should not use regarding themselves. While the document had its own deep logic for such claims, the danger, evident to very many Christian readers and readers of other faiths, was that the authors of the document missed the reality of the softer boundaries and vital bonds among religions that cannot be made secure by making them harder and fixed, by stipulating that words be used only the way “we” want them to be used.

Or even more generally, how many Christians in the United States today assume that “God,” with that capitalized “G,” intends only the God of Christianity, and take this to be such an obvious fact that “God” is simply a synonym for “the Christian God”? Now it is true that one can argue that in English, “God” has such a Christian heritage that in fact in English at least it serves as a proper name, and not so smoothly the designation of a Being whom could similarly be called on by others as well. But there is a great deal to be lost by an interfaith stinginess, ours or the Court of Appeals in Malaysia, that would seem to say, “Your God is not God, your God is not Allah,” ours alone is. Imprecise language too often gets us into trouble, but there are occasions, as this one, when the unruliness of language can be the saving grace.

"Is Allah not our God?" Together we need to ask and answer such questions, neither insiders nor outsiders getting to decide it on their own.

Francis X. Clooney, S.J.
Show Comments (
4
)
Comments are automatically closed two weeks after an article's initial publication. See our comments policy for more.
Teresa OBrien
8 years 10 months ago
I find this very difficult to understand because Allah and the Christian God are one and the same. We are supposed to believe in the same God - the God of Abraham. So, this really makes no sense at all.
Janet Londagin
8 years 10 months ago
The god of the Koran is not the God of the Bible. Neither are any of the characters in the Koran, the characters of the Bible. The Koran is an imitation of scripture and was written to lead people away from Judaism, which already had the holy scriptures.
Patrick James
8 years 10 months ago
The name Allah is not only Muslim, it is used by Christians in the Middle East centuries before the rise of Islam. It's an Arab name for God that even preceded Christianity. I wonder if the court in Malaysia consulted an Arabist or an expert in Middle Eastern culture, language and history. But maybe the Malaysian court is biased and want to create animosity between Muslims and Christians, maybe they don't want fraternizing of Christians and Muslims. (maybe afraid of conversions to Christianity?)
JR Cosgrove
8 years 10 months ago
At Mass a couple years ago about 6 weeks before Christmas, there were some representatives from a Catholic organization in Bethlehem. They made creches, crucifixes, madonnas etc. I was talking to the woman who was selling the items and had a brief conversation. I asked her what was the word for God in their language. She replied Allah.