After Ferguson, changing the culture of police impunity at home and abroad 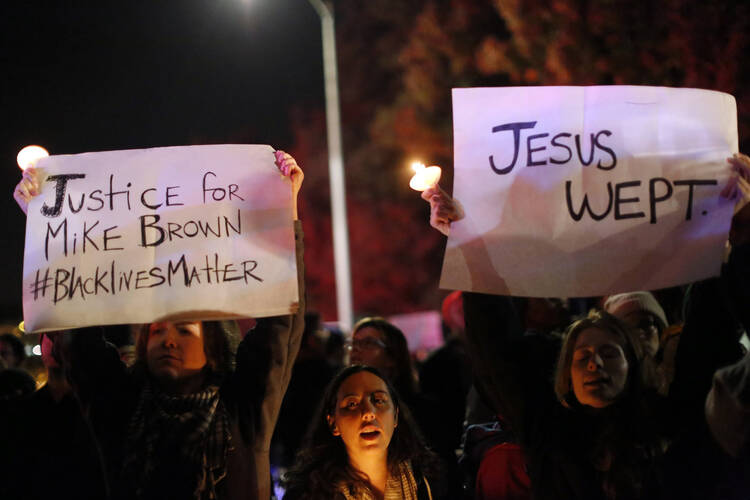 I was out of the country when Ferguson erupted over the summer. From abroad, it looked like the Arab Spring had come to the Midwest. Last night as I watched the news coverage, it looked the same: an angry, outraged citizenry clashing with the police power of the state. “Unbelievable” was the word CNN’s reporters used repeatedly as they roamed around the small part of Ferguson where people were rioting. Were they talking about the vandalism they were seeing, or the tear gas they were choking on, or both? It wasn’t clear, nor why journalists were employing the kind of empty rhetoric they would not use abroad. From what they said, the violence was committed by a small minority of the protesters on the street, and their own experiences showed that police statements that the police were using smoke canisters, not tear gas, were false.

President Obama’s statement prior to the announcement of the Grand Jury’s decision whether to indict the officer who killed Michael Brown seemed appropriate rather than inspiring. He covered his political bases, but the necessity for him as president to rise above the racial divide Ferguson exposes seems to have inhibited anything more eloquent or stirring. The militarized response the state of Missouri employed, calling out the National Guard ahead of the announcement, seems part and parcel of the problem it was intended to address. It’s conceivable the decision by the Grand Jury not to indict Darren Wilson was right on the particulars, but the message it sent was that police misconduct, even murder, is condoned. When it comes to forgiveness, we are not an equal opportunity society. “All is forgiven” is an attitude reserved for police officers only. Everybody else gets 20 years to life.

Police brutality is not a problem unique to the United States, of course.  Human rights abuses in Pakistan, Russia, Egypt and many other countries mostly occur at the hands of the police. There are many, many states around the world where the police use inappropriate or excessive force, which minority populations bear the brunt of.

How do we change the culture of impunity our police operate in today? Since the death of Michael Brown, how many more unarmed people have been shot? The tragic death of a 12 year old with a toy gun by Cleveland Police this past Saturday only underscores the serious and systemic nature of racism and police brutality in our society today.

Ending the militarization of the police would help. But we need not only to stop providing police with assault rifles and armored personnel carriers, we need a sea change in our attitudes, on both the part of the police and the larger society. Our police need to be more accountable to the society they serve.  As Americans, we need a dialogue on how we make that happen.

Margot Patterson
Show Comments (
7
)
Comments are automatically closed two weeks after an article's initial publication. See our comments policy for more.
Joseph J Dunn
7 years 10 months ago
"It’s conceivable the decision by the Grand Jury not to indict Darren Wilson was right on the particulars, but the message it sent was that police misconduct, even murder, is condoned...How do we change the culture of impunity our police operate in today?" For a legal analysis of the grand jury case against Officer Wilson, see here: http://www.washingtonpost.com/news/volokh-conspiracy/wp/2014/11/26/officer-wilson-had-a-powerful-case-for-self-defense-under-missouri-law/. For transcripts of the grand jury testimony, and the exhibits presented: http://www.ksdk.com/story/news/local/ferguson/2014/11/25/ferguson-grand-jury-documents/70100296/
John Placette
7 years 10 months ago
As a Roman Catholic Deacon and someone who has been a law enforcement officer for 36 years, I am appalled by this article. Day in and day out, law enforcement officers handle very tough situations without the use of force. In my 36 years, I have never had to resort to deadly force, thank God. I know of no officer who ever looked forward to using his weapon. Police officers are not warriors, but rather the gate keepers of a peaceful society. In most areas of the country, the crime rate has dropped contrary to the impressions left by the media. To compare law enforcement in the United States to third world countries is nothing less than shameful. I refuse to address the racial comment as it is beyond any degree of reason. I pray these views will be reassessed and that America Magazine will review it's editorial policies. I would hate to see a Jesuit ministry become just another provocative rag. By the way, I have also spent the last ten years working in correctional ministry at the county jail and state prison level.
Paul Bryant
7 years 10 months ago
What makes the article such an unconscionable slander against the women and men assigned to protect the citizens of this country is its total lack of supporting evidence. It is one bald slanderous assertion after another. To compare the police practices in the United States with human rights violations in Pakistan, Russia, and Egypt demonstrates a total lack of understanding of the lengths to which police personnel go to protect the perpetrators of crime in this society, as opposed to the brutality evident in the other societies mentioned. While it is true, Michael Brown is dead. The author fails to address the circumstances that led to his death, all of which point to the reasonableness of Officer Wilson’s beliefs and actions. Further, the use of the National Guard became evident to all when the protest turned into a riot. Peaceful protests are protected by the first Amendment; riots are not. I am a retired Superior Court Judge of the State of California.
Gabriel Marcella
7 years 10 months ago
As a faithful reader of and subscriber to America for many years I find this to be the most illogical and irresponsible writing to ever appear. Ferguson demands calm reflection and analysis. Instead this piece provides assertions without facts, grossly invalid comparisons, and appeals to unreason. Public intellectuals need to be careful with their words lest they become part of the problem.
Vince Killoran
7 years 10 months ago
It is clear that there are too many guns in our society and that police procedures must be reformed with regard to the ubiquitous use of deadly force. This case, however, is not the one in which to claim racial injustice. To be sure, there is racial disparity in stop & frisk as well as sentencing. But in this particular instance they do not lead to the conclusion that P.O. Wilson acted with racial malice or broke the law. As a progressive I denounce "birthers" and global warming deniers. We must do the same with fellow progressives who look past the facts to serve a cause. In the end they weaken it.
Eli McCarthy
7 years 10 months ago
Great article Margot. We've got major problems with the militarization of the police and lack of accountability. This case was tricky, but part of larger pattern of abuse. Here's my initial reflection on it. http://tinyurl.com/oaft52h
John Placette
7 years 9 months ago
Why do you believe there is lack of accountability for police. Let's take a walk through a use of deadly force case: A police officer who uses deadly force automatically becomes a homicide suspect. The "crime scene" is worked like any other scene of a homicide. He is interrogated as a suspect. He cannot invoke his right to silence as a run-of-the-mill suspect could. His actions are scrutinized by his supervisors, a grand jury, the district attorney's office and usually federal civil rights investigators. He can be suspended or fired for violating a policy. He can be sued. He can be charged (if a grand jury or DA so desires.) Rather than being perceived as innocent until proven guilty, he is looked upon as guilty until proven innocent. And he does it for $45,000 a year. It is absolutely WRONG to say that there are accountability problems.