An Advent encounter with the cold and hungry Christ

An Advent encounter with the cold and hungry Christ 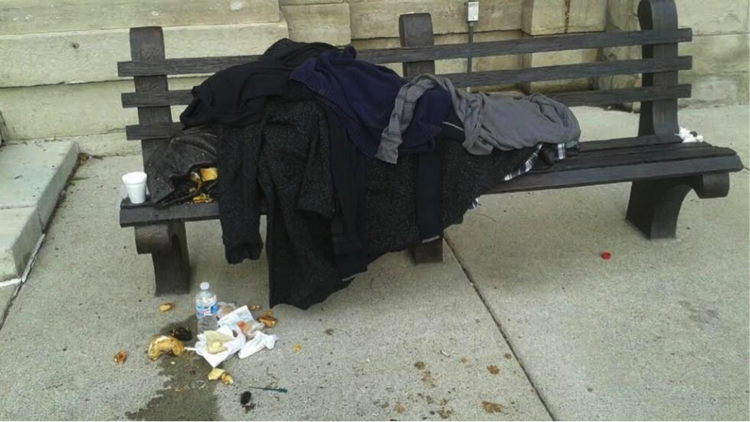 My muscles tensed at first glance. My Irish temper flared at the idea that someone had vandalized our “Homeless Jesus” statue. Then the unexpected happened.

The statue arrived earlier this year when an anonymous donor paid to have it installed in front of Sts. Peter & Paul Jesuit Church, in downtown Detroit. He knew of our ministry to the homeless, a ministry that has spanned over two and a half decades.

The sculpture was dedicated the week after I began my first assignment as the associate pastor and director of the Pope Francis Center, our homeless ministry. After Mass, our bishop and a gathering of over 200 people stood with me in front of the church as I offered a prayer and blessing of dedication. A funeral pall covered the statue and when the pall was lifted, a reverent silence descended upon us. Before us was a person lying on a public bench, his head and body covered, concealing his identity. It was the wounds from his crucifixion on his exposed feet that disclosed who he was and what he wants us to know.

But that was five months ago, and the warm summer days of July have been replaced with the cold grey days of winter. Since the dedication, people come by daily to see the statue: some just walk by, others stop to touch it, many take photos, and often they pray. It has become a place of veneration.

But on this cold December morning, in the middle of the second week of Advent, I stood looking at the desecration of this sacred work of art. In my exasperation I mumbled inaudibly, “What were you thinking?” And as I stared the scene in front of me, I began to see what I had not seen before. The image began to reveal something not of vandalism but much its opposite. It disclosed the inclination and compassion of one of our homeless guests, one whose reality is frequently altered by mental illness.

The body of Jesus before me was draped in clothing and blankets; so many in fact that I first wondered if there was another body under them. Tucked in Jesus’ mouth was a piece of bread. On the ground below his head was a pile of food particles, an empty water bottle, used napkins and a coffee stirrer, all lying scattered on the wet cement. A full cup of coffee sat on the bench above his head.

It’s a funny thing, that fine line between insanity and sainthood. Often I find in my ministry with the homeless that those who struggle most to hold onto reality are capable of profound insights. As I stood there staring, the Christological symbols became undeniable: bread broken and shared, placed in Jesus’ mouth. The leftover food and drink on the ground beneath him, remnants of a feast—a wedding banquet perhaps—left on the ground that was still wet from water poured out. At his head a cup of coffee waited in expectation of his rising. Unable to put the socks on his exposed feet to keep them warm, the socks were draped over them, like a burial shroud covering his wounds. Neatly folded within the clothing and blankets that lay on top of Jesus were coins: the widow’s mite given out of her need rather than her surplus.

It was a profound mingling of madness and mysticism, of child’s play and divine command. It is at once reality and insanity, preposterous and prophetic. What was before me were offerings to pay homage to our King. “Lord, when did we see you cold and hungry?” And the wounded soul responded.

The Lord our God is near. What shall we do?