Acts of Young Apostles: The Controversy at Eastside Catholic 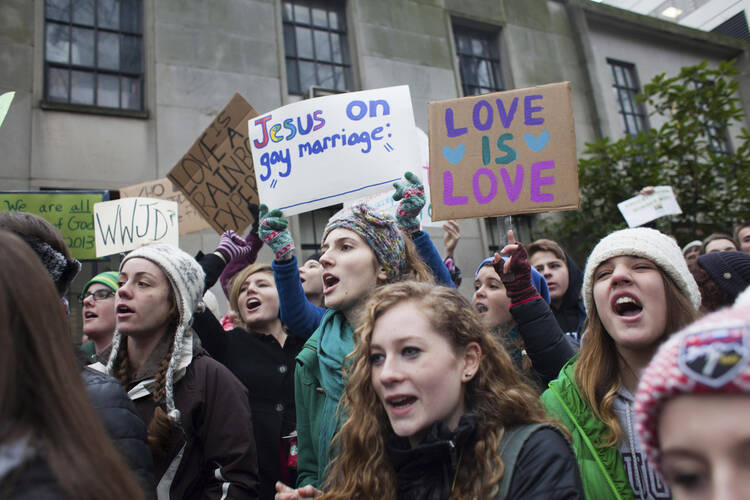 Editor’s Note: Mark Zmuda, the former vice principal of Eastside Catholic High School in Sammamish, Wash., was forced to resign in December after it became known that he married a man. Since then, students have held rallies in support of Mr. Zmuda. In this guest blog post, John D. Whitney, S.J., pastor of St. Joseph Church in Seattle and a former provincial superior of the Oregon Province of the Society of Jesus, reflects on the students’ response. The essay was originally published in the St. Joseph parish bulletin on Jan. 12.

“Being prophets may sometimes imply making waves. I do not know how to put it…. Prophecy makes noise, uproar, some say ‘a mess.’ But in reality, the charism of religious people is like yeast: prophecy announces the spirit of the Gospel.”
- Pope Francis on religious life in an interview in America (9/30)

“The thought comes to me of the temptation, which perhaps we might have and that so many have, of connecting the proclamation of the Gospel with inquisitorial blows of condemnation. No, the Gospel is proclaimed with gentleness, with fraternity, with love.”
- Pope Francis in a homily on Jan. 3 at the Church of the Gesu in Rome

We must imagine the scene: the church, still subject to occasional bouts of persecution and yet growing feverishly among both Jews and Gentiles alike, faces a great conflict: How are Gentiles to be admitted into the community? Must they first become Jews, i.e., accept the Mosaic law and the signs of the covenant through circumcision? Or can they adapt the path of Jesus within their own cultural framework? (Acts 15)

To us, from the distance of 2,000 years, the answer may seem self-evident; yet, for many in that first community around Jerusalem, to release Gentiles from the strictures of the ancient covenant was to surrender to the culture of the day, to abandon the practice of faith in which Jesus himself was known to engage. It seemed, to these Jewish-Christians, that the church was being asked to surrender to the desires of the world, to become “politically correct,” all for the sake of not offending its new converts. On the other hand, there stood in their midst those who worked among the Gentiles or who had gone to them, and testified to the power of the Spirit within them. Peter, Paul and Barnabas spoke forcefully for a new vision and a new understanding of the faith.

What is most amazing about this moment in the church is how the community comes to decide, together, what is to be done. There is debate and disruption, but it is not seen as division; rather, it is the way the Holy Spirit is working within the community. Further, this debate is grounded on human experience, and not on tradition or on the power of office. Rather than beginning with Scripture—the Torah or the Prophets—the community begins with the experience of the faithful: the testimony of Peter, Paul and Barnabas, none of whom claim special authority in the face of the communal discernment, but all of whom, instead, simply testify to the way in which they have seen the Gentiles touched and filled with the grace of the Holy Spirit. Only then does James, in response, note that “the words of the prophets agree with this” (rather than “this agrees with the prophets”). The understanding of God and the meaning of the tradition comes not from a measured and disengaged reflection by those in authority, but in the noisy, messy and (some might say) undignified uproar of the community of faith. Here is diversity without division, complexity without separation, debate and dissent without the need for punishment or condemnation. In listening for the living Spirit of Christ Jesus, the church begins by listening to the sinners and seekers who are his body in the world.

Over the last year, I have thought often of this scene in Acts 15, and especially as I have listened to Pope Francis speak of the need for “uproar” by religious, or call young people to make “a mess” in their dioceses. Like many, I have been refreshed and renewed not by some great doctrinal changes, but by the absence of fear expressed in the words of the Holy Father; by his trust in the workings of the Holy Spirit and his passion for courageous acts of faith—even acts that risk error or end in failure. For Francis, it seems, the timidity of tightly held borders, the safe-harbor of accepted opinion and doctrinal purity risks a greater sin—a greater loss to the church—than the dangerous paths of love and welcome. Ships may be safe within the harbor, but that is not what ships are for. Like the church of Acts, Francis calls today’s church to a fearless proclamation of Christ and the Gospel, even though trying to understand such a proclamation may lead us to conflict and disruption.

In the last few weeks, the students of Eastside Catholic High School in Sammamish, Wash., and their companions from other schools in the area, have given us an example of the kind of passionate discernment, motivated by the Gospel, that characterizes an important dimension of Catholic education—and, indeed, should characterize our faith both in and out of school. Regardless of the particulars of this situation (and personnel issues may have complexities I do not know), these students have spoken up as products of Catholic education, as women and men motivated by the Spirit and by their own experience of grace. Though it is a painful time, their teachers and their parents should be proud of the Gospel spirit that has been planted in these young hearts.

Likewise, we in the broader church should be grateful for the mess these young people bring, and should listen with compassion and openness to the Spirit that moves within them. Their love, their gentleness, their quest to make the church “the home of all, not a small chapel that can hold only a small group of selected people,” demands more than the silence of authority; it demands communion and engagement with the church—i.e., education, direction and dialogue—since their spirit is a sign of the church and is lifeblood for the church. May we engage, with fearless love, at the side of our younger sisters and brothers; and may we trust in the God whose church we are all becoming.

John D. Whitney, S.J.
Show Comments (
5
)
Comments are automatically closed two weeks after an article's initial publication. See our comments policy for more.
ron chandonia
7 years 9 months ago
Sorry, Father, but "passionate discernment" that ends up trashing fundamentals of Catholic social teaching does not strike all of us as evidence of the Spirit at work. Since these kids apparently have little appreciation for teachings on marriage and family life grounded in Scripture and developed through centuries of experience in the faith, their protest strikes me as evidence only that what passes for Catholic education these days does not work very well at all.
M R
7 years 9 months ago
These young people live in a world where being gay is not seen as a sin (or, rather, acting on one's gayness is not seen as a sin). The Church will either come to understand this facet of human sexuality, or it will not. The students who attend this school will grow up, get married, and have children of their own. As adults, they will have to decide if they want Catholicism in their lives, and in the lives of their children. They either will, or they won't. If you would like a church of old people clinging to erroneous beliefs about human sexuality, you may get your wish, but the world--and the spiritual lives of the next generation--will be poorer for it.
ron chandonia
7 years 9 months ago
I think we can already see what taking a very different stance - one more in line with Father Whitney's thinking here - has done for the spiritual welfare of young people in some of our sister churches. Just consider the throngs of "young apostles" in the typical Episcopal parish . . .
Cathleen Allen
7 years 9 months ago
Good for the students! For too long, the Catholic Church has been stubbornly clinging to the Middle Ages. Jesus' church was probably "messy" as well, but also faith-filled and exuberant! On the issue of gay marriage, one student's sign says it all - Jesus never said anything about homosexuality or gay marriage. The early church didn't exclude people based on their sexual orientation (or their marital status, for that matter). Sts. Sergio and Bacchus were declared saints, not forced to leave the assembly. The faith of these students seems strong. I hope and pray that their religion does not weaken it.
Jack Moore
7 years 9 months ago
The heart of the issue here is how Eastside and the Seattle diocese as well as other diocese' around the world respond to similar issues. Since gay people and gay Catholics are all around us, they're going to continue to be a part of our lay ministries and Catholic education and traditional Catholics have two choices: They can either learn to deal with it, embrace the person, and say, as Pope Francis says, "Who am I to judge?" Or, they can remove them from ministry and the church for their sinful behavior. But in doing so they should also be consistent with the Gospel by removing divorced Catholics from lay ministry and not allowing them the Eucharist--an action I think most Bishops are capable of doing but quite leery of.