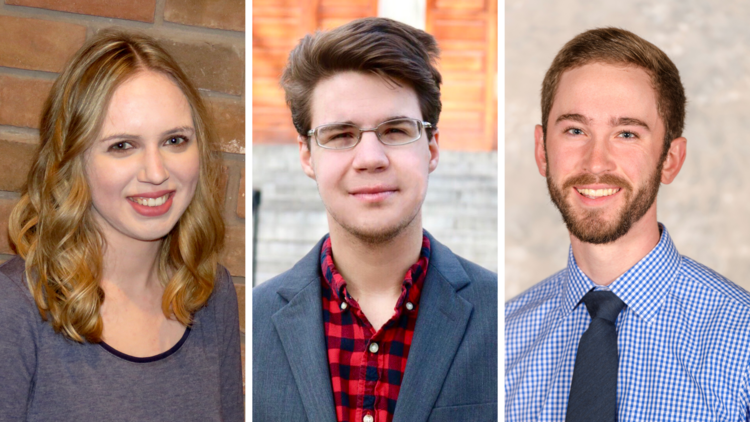 “This is a highly competitive program and unique opportunity for graduating seniors interested in pursuing a career in journalism,” said Matt Malone, S.J., “and we are proud to continue offering this opportunity by welcoming Ryan, Kevin and Isabelle to become a part of the America team.”

Ryan Di Corpo, born in Massachusetts, graduated from Fordham University with a major in film and television and a minor in journalism. He is former culture editor of The Fordham Ram. He has conducted interviews with a number of filmmakers, journalists and political figures, including the Academy Award-winning documentarian Frederick Wiseman and the Tony Award-winning actor Leslie Odom, Jr. In addition to his love of movies — and personal collection of over 800 films — Di Corpo is also dedicated to the promotion of nonviolent Catholic activism. He helped establish the Berrigan Forum on Nonviolence, a student-run Campus Ministry organization at Fordham, in 2017.

Kevin Jackson, originally from Atlanta, Ga., will graduate this year from Georgetown University, where he has studied theology and economics. His college experience has been highlighted by his work with Georgetown's Catholic Ministry, where he has served as a videographer for various programs and as a student coordinator for small faith-sharing groups. Kevin has spent his past two summers exploring the media industry through internships with Fox News and ESPN. He is also a captain of the Georgetown Varsity Men's Golf Team and enjoys nothing more than summer evenings on the golf course.

Isabelle Senechal is a senior graduating from Creighton University with a B.A. in journalism, English and French. She is a journalist, poet and documentary filmmaker with an unbridled enthusiasm for storytelling and social justice. During her undergraduate years, Isabelle worked as a news reporter for the Creightonian, an intern for the Nebraska Writers Collective, and lead story designer for Creighton’s Backpack Journalism program. She also served as president of the Panhellenic Council and founded Courage Club, a student organization against sex trafficking. As a writer and activist, Isabelle aspires to share others’ stories and provide a voice for the voiceless.