CNN Will Always Be With Us: The return of Aaron Sorkin's 'The Newsroom' 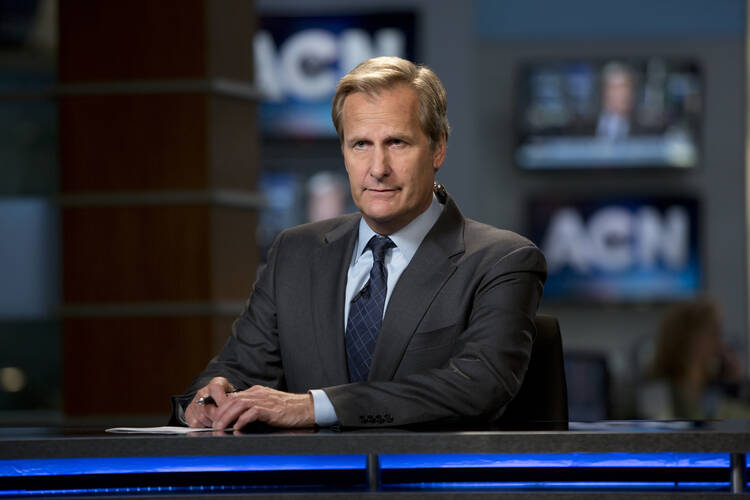 It is impossible to know what kind of coverage Walter Cronkite would have given to the Trayvon Martin case, which ended Saturday with George Zimmerman being declared not guilty after killing the 17-year-old Martin in a Florida neighborhood.

But while we can’t know what Cronkite would have done, a few things seem clear: he wouldn’t have released George Zimmerman’s social security number and address, as CNN did. He wouldn’t have spun people’s outrage over Martin’s death as a ploy meant to hurt the National Rifle Association, as Fox News repeatedly did. And he very likely wouldn’t have played over and over again the 911 calls—including the gunshot—as Fox, CNN and ABC News did.

Then again, Cronkite wasn’t responsible for news 24 hours a day. He didn’t have to try to find new perspectives on the same limited set of facts. He wasn’t subject to the current pressures to keep audience share not just week to week but minute to minute.

Cable news: it is a many-headed beast, always hungry, driven by ratings, never satisfied. And each shiny new set piece and superficial, hyper-sensationalized coverage is one more shovelful of dirt on the grave of American TV journalism.  Tomes have been written on the subject, and most nights “The Daily Show” and “The Colbert Report”offer a grand tour of the indecent, Jerry Springer-esque palaver that substitutes for news on television today.

Last summer, HBO began its own take on the matter with Aaron Sorkin’s “The Newsroom,” a one hour drama about a self-satisfied cable news anchor (Will McAvoy, played by Jeff Daniels) tired of delivering soul-killing pablum night after night, who decides to be like his heroes and deliver hard-hitting news. It was to be “Network” as a TV show, Jeff Daniels screaming on behalf of all of us, “I’m mad as hell as I just can’t take it anymore.” The trailers were electric, a brilliant and acerbic McAvoy lacerating a college student for suggesting America was the best country in the world.

The show’s first season, though, did not go so well. Critics raged that the female characters (performed by the talented Emily Mortimer, Alison Pill and Olivia Munn) were all basically schoolgirls who just wanted the right boy to like them. The opening credits, images of news greats set to a nostalgic Thomas Newman score, felt slow, self-important, ridiculous. And the show itself seemed almost schizophrenic, a date on Valentine’s Day holding equal status with the uprisings in Egypt during the Arab Spring.

Even Sorkin’s tennis-match-zippy dialogue seemed to have lost its luster, perhaps because the audience already knew that magic trick of his so well.

“Newsroom” also made the unusual choice to set the show two years prior to its airdate—the first episode is set in May 2010—and to spend the season covering actual events from the intervening period.  So the pilot looks at the BP Horizon oil spill; other episodes touch on the killing of Osama bin Laden, Fukushima, Anthony Weiner, the Casey Anthony trial, Gabrielle Giffords and the Republican primary debates. At times this choice facilitated the show’s sometimes smug self-righteousness, a sort of dramatic version of Jon Stewart’s dog pile on the American media.

And yet the indignation that fuels “Newsroom” proved cathartic as well. Each week Sorkin well captured the fury that many have felt at politicians making outrageous claims without scrutiny from so-called journalists; toddlers with tiaras (or abusive parents) being forced on us as “breaking news”; and coverage that seeks out not the truth but the “human angle” that will create the strongest, most polarizing feelings.

The second season, which debuted on Sunday, finds Sorkin having taken his critics’ words to heart. Gone is much of the snappy patter; indeed, the first four episodes are perhaps the least-Sorkin-sounding scripts he has ever delivered. McAvoy’s executive producer MacKenzie McHale (Mortimer) is almost immediately given a “Broadcast News”-worthy challenge that demonstrates just how capable a producer she is. The show’s most frustrating relationship issues are also quickly sent packing. Even the opening credits have been changed, the song sped up to feel more modern and energized, the images now tracing the path by which an event becomes a news story.

While the result is less effervescent, and sometimes slow, it also feels more disciplined and deliberate. The show continues to mine real stories, like the Georgia execution of Troy Davis, the Republican debate audience that booed the question of a gay Republican soldier, child soldiers in Uganda and Occupy Wall Street. But it does so with less hunger for the easy and the cheap, and more interest in a thoughtful conversation.

In preparation for this article I rewatched the first season, and found myself stunned at the show’s prescience. A year before Edward Snowden, Sorkin had already written a storyline about a government whistleblower who reveals that the NSA is secretly scanning our calls. Watching the characters deal with the shooting of Congresswoman Gabrielle Giffords after this year’s tragedy at Newtown was simply devastating.

In retrospect, it actually makes sense that the originaltheme music was oddly patriotic; fundamentally “Newsroom” is a show about a modern day Washington fighting alongside young idealists for our independence from the trash that suffocates our national discourse.

But even more than that, “Newsroom” offers a precious space to reflect again on the important events that so often rush by in a flurry of tweets and babble, a fresh moment in which we can sift through our initial experience and go some place deeper.

In the end, cable news is more likely to change the hairstyles of its anchors than anything of substance. But that is not to say we can’t afford ourselves the opportunity to think anew on the events we’re being presented, the Trayvon Martins and the Newtowns, and let them genuinely and lastingly affect us. The CNNs and Fox News may always be with us; thankfully, for now so is “Newsroom.”

Jim McDermott, S.J., is a graduate student in screenwriting at the University of California, Los Angeles.

@PopCulturPriest
Show Comments (
1
)
Comments are automatically closed two weeks after an article's initial publication. See our comments policy for more.
JR Cosgrove
9 years 6 months ago
A more relevant introspection is why America, the magazine, has mentioned Trayvon Martin more often than Kermit Gosnell. One deserved national attention and got none and has relevance to Catholic beliefs. The other was not worthy of anything more than maybe local Orlando news but became a national obsession. There is now a new term applied to journalism when the press kills a politically undesirable story. It is to Gosnell it. Maybe we can have another term to hype a story beyond any reasonable basis to help certain people politically. It could be to Trayvon it.