Chagall's Mirror: How a Jewish artist can help Christians understand the crucifixion 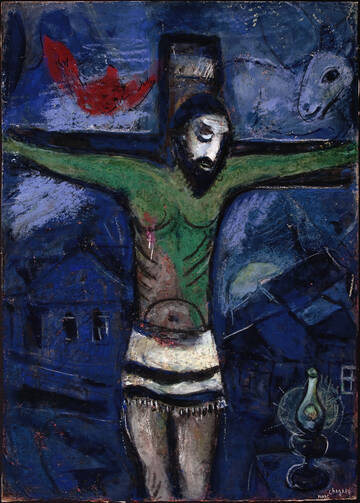 The Jewishness of Jesus has seldom been rendered more clearly in art than in the crucifixion scenes of Marc Chagall. Of the 31 paintings and 22 works on paper in “Chagall: Love, War and Exile” (on view until Feb. 2, 2014, at the Jewish Museum in New York City), the handful of crucifixions are most provocative. In these, and in dozens of other crucifixions not shown here but searchable online, Chagall offers invaluable insights, especially to Christians.

Although Chagall was not the only Jewish artist to focus on the crucifixion, he made so many crucifixions that some have called the habit an obsession. In fact, the habit fits the larger pattern of his work. Chagall (1887 to 1985) repeated throughout his oeuvre a set of images, which includes a bride and wedding scenes; allusions to Vitebsk, Belarus, the town where Chagall was born; birds, cows, hens, roosters and donkeys; angels and demons; violins, Torah scrolls, candelabras and flames. One could simply add crucifixions to that list. With this visual vocabulary, the artist connected his own interior world to history, Western culture and current events.

“Perhaps I could have painted another Jewish prophet,” Chagall said, “but after two thousand years mankind has become attached to the figure of Jesus.”

Chagall, whose work has been described as both dreamlike and fantastic, has been called, sometimes dismissively, a mystic who spoke in symbols. But Chagall said, “I am against terms like ‘fantasy’ and ‘symbolism’....Our whole inner world is real, perhaps even more real than the visible world.” But he understood the word symbol more fulsomely. “For me, Christ has always symbolized the true type of the Jewish martyr. That is how I understood him in 1908 when I used this figure for the first time,” Chagall said. “It was under the influence of the pogroms. Then I painted and drew him in pictures about ghettos, surrounded by Jewish troubles, by Jewish mothers, running terrified with little children in their arms.”

The artist’s intention in creating these crucifixions is important, but art is a dialogue between artist and viewer. What does one see in them today?

Chagall was 25 when he painted“Calvary” (also titled “Golgotha” or “Dedicated to Christ”), the earliest crucifixion on exhibit. In this large Cubist study in red and green, a pale blue Jesus is stretched on the cross. Shown with a rounded body, bald head and beardless face, Jesus has been referred to as a “Christ-child.” “I wanted to show Christ as an innocent child,” said Chagall. He also positioned Jesus’ parents before the cross--both parents. “I was thinking of my own parents when I painted it,” the artist said. Typically Mary appears, not Joseph, because in Scripture she is the only parent mentioned as having been present. While Chagall draws on Christian iconography, he renders it in modern style, showing the influence of other Parisian painters, like Robert Delaunay, and personalizes the content. Here he has integrated elements of Catholicism, abstract painting and his own innovations.

Always Chagall assumes the Jewishness of Jesus, unlike many Christians who have to consciously remind themselves that Jesus was a Jew. Chagall identifies with Jesus’ upbringing, his ritual and biblical tradition and his life under foreign occupiers hostile to Jews. After Ambrose Vollard, the art dealer, commissioned him to illustrate the Hebrew Bible, Chagall immersed himself in Scripture and looked for creative ways to present important scenes. Vollard subsidized Chagall’s first visit to the Holy Land in 1931, a trip that deeply affected the artist. Between 1931 and 1939, Chagall made 65 etchings for the Hebrew Bible. Then the project had to be set aside for years, because Vollard died, the war broke out, the artist and his family moved to the United States, and Bella, Chagall’s wife and muse, died at war’s end. When Chagall finally finished the Bible project in 1957, his thoughts had been caught up for decades in Jewish identity, the Bible and the icon of the crucified Jesus. For him Jesus represented all the innocent Jews ever slaughtered. And there were millions.

Chagall identified personally with Christ. In “Descent from the Cross,” a bird-headed figure removes Jesus’ body, holding him pieta-like. Chagall painted it in 1941, the year he and Bella moved from Paris to Provence, hoping to survive the war. But when the French citizenship of Jews was revoked that year, American leaders of the Museum of Modern Art and the Guggenheim along with the Emergency Rescue Committee, which saved thousands of at risk artists and intellectuals from the Nazis, gave the Chagall family safe passage to New York. Chagall understood what the Nazis had in store for him. Jesus wears a Jewish prayer shawl around his loins in this picture. And Chagall has changed the placard above Jesus’ head, from INRI (Jesus of Nazareth King of the Jews) to his own name, MARC CH. An approaching angel brings a palette and brushes. Some see Jesus’ face as a self-portrait of Chagall. The picture is personal and may depict Chagall’s rescue. But because Jesus has been put to death, it seems to say that despite his rescue, something within Chagall has been put to death.

Writes Chagall in “The Painter Crucified”: Every day I carry a cross/ They push me and drag me by the hand/ Already the dark of night surrounds me/ You have deserted me, my God? Why? . . .I run upstairs/ To my dry brushes/ And am crucified like Christ/ Fixed with nails to the easel.

Other works on exhibit attest to the diversity of Chagall’s crucifixions. Jesus wears a head cloth rather than a crown of thorns in some. In others it is not Jesus on the cross, but some nameless Jew. Just as Chagall insists that Jesus represents Jews, he also understands that a persecuted Jew represents Jesus. These are the two sides of Chagall’s magnificent insight.

Chagall is a colorist.“Obsession”(1943) includes a green crucifixion and a town in flames. The painting is so red overall that it seems to burn. Inside a barn aflame, a woman drives a wagon, hoping to escape. The title’s obsession is not Chagall’s, but rather the obsession throughout history of those who murder innocent Jews.

Note two gouache works from 1944 and 1945. “The Crucified” depicts a macabre village street where several fully clothed Jews hang on crosses. On a nearby rooftop, a seated Jew looks out as the sole survivor of this horror, holding a red, perhaps bleeding, Torah. In “Apocalypse en Lilas: Capriccio,” Jesus hangs naked on a cross in frontal position, something one hardly ever sees in Christian iconography. On his forehead he wears a Tefillin, a small leather box containing Bible verses. Below him stands a man with a swastika on his armband, removing a ladder as though he had just finished placing Jesus there. This scene starkly illustrates human cruelty.

Compare those images to three postwar paintings.Although “Flayed Ox” shows a red, slaughtered ox (not Jesus) hoisted on a cross-beam, it links crucifixion and the Jewish tradition of Temple sacrifice with the Holocaust. In “Christ in the Night,” the crucified Jesus wears the Jewish prayer shawl, but the color, a deep, mournful blue, has changed the tone from agony to sorrow. Chagall is in mourning. Though the war has ended, enormous damage has been done. Finally, in “Exodus,” Chagall presents Jesus on the cross as the central figure, not Moses as one would expect from the title. Jesus wears a halo and is the savior of the Exodus story, perhaps a testament to the fact that at least some Jews survived the Nazi extermination plan.

Chagall’s genius was to use Jesus’ crucifixion to address Christians, to alert them via their own symbol system to the systematic cruelty taking place in the Holocaust. Whenever Christians overemphasize the uniqueness of Jesus’ suffering and death at Calvary, a past event, we risk losing sight of all the crucifixions still being perpetrated. In our day, wanton violence, maiming, torture and other cruelty take place, not only against Jews, which is what concerned Chagall, of course. The value of Chagall’s crucifixions is that each holds up a mirror that says to Christians, Here is your Lord. What will you do to stop this crucifixion?