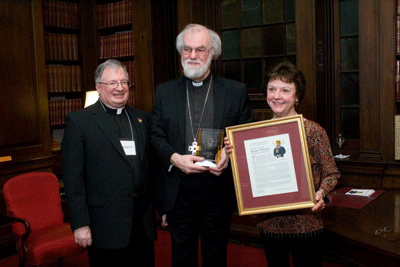 On January 25 Rowan Williams, the archbishop of Canterbury, accepted the 2009 Campion Award from the editors of America. A renowned scholar, theologian, ecumenist, pastor, professor and poet, Archbishop Williams is the author of more than a score of books. Drew Christiansen, S.J, the editor-in-chief of America, introduced the archbishop, and literary editor Patricia A. Kossmann presented him with the award.

Read Father Christiansen's introduction, or listen to an audio recording of Archbishop Williams' remarks. Update: A transcript of the archbishop's remarks are also now online.

A slideshow of pictures from the evening is also now available.

The Campion award is given on a regular basis to a notable Christian person of letters. It is named after St. Edmund Campion, S.J., an English writer and martyr who is honored in both the Anglican and Catholic traditions.