Can HBO’s ‘The Peripheral’ live up to the sin, synthetics and satisfaction of ‘Westworld’? 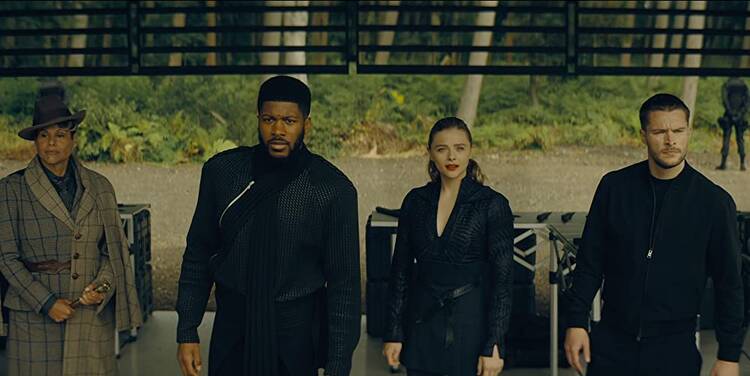 On its premiere in 2016, our introduction to a world of robots, cowboys and moral decay was HBO’s highest-rated first episode of any series. Season 1 of “Westworld” was the most-watched first season in HBO history upon its completion.

But by season 4, critics were routinely lambasting the show’s unstructured, meandering plot and tired tropes. The only remnant of the magic of the first season was its soundtrack. HBO officially canceled the show on Nov. 4 and has since announced they will be removing it from their streaming service, HBO Max.

Only a few weeks before that announcement, Amazon released “The Peripheral,” another show by “Westworld” creators Jonathan Nolan and Lisa Joy. This new original series resembles “Westworld” in countless ways, from its plot set in the near future that focused on the chilling possibilities of robotic technology, down to the hair and costumes of their lead actresses.

What made that first foray into a Wild West of sin and synthetics so special?

Yet even with solid acting performances and breathtaking visuals, “The Peripheral” failed, just as later seasons of “Westworld” failed, to capture any of the immeasurable power of Nolan’s and Joy’s television debut. Why is that? What made that first foray into a Wild West of sin and synthetics so special?

First, for anyone who has not seen “Westworld,” the show takes place in a futuristic playground for the ultra-rich. An amusement park, sort of a cross between a video game and a Vegas casino, is populated by robots who look and act in ways indistinguishable from humans. The park creates dozens of interrelated adventures that guests can go on with the robots, or “hosts.” The whole thing is set in a frontier town in the mid-1800s. Sounds like a blast, right?

Yet the park is a little too realistic, in a few different ways. People visit in order to satisfy their basest desires; they visit to rob, rape and kill the hosts without consequences. After the customers commit their crimes, the hosts are repaired and their memories are wiped. The show explores whether it takes someone truly evil to enact these crimes, or whether average people become capable of evil when they escape societal pressures and see their victims as non-human.

In season 1, a guest arrives at Westworld and falls in love with a host named Dolores. She seems to be developing consciousness, remembering the horrible things that happen to her and catching glimpses of her robot identity. This guest becomes convinced that Dolores is becoming more than just a robot. Throughout the first season, we wrestle with the moral implications of self-aware creations by humans, and what might distinguish them from us.

There is so much to like about “Westworld” on the surface: sweeping shots of the American southwest; a soundtrack that includes a pianola version of “Black Hole Sun” alongside “Paint It Black” on Spanish guitar; surreal storytelling that blurs our understanding of the timeline of “Westworld” as it draws us deeper into an unsolvable maze.

None of those qualities, though, get to the heart of why later seasons failed, why “The Peripheral” cannot compare, and why I continue both to watch and to write again about the first season of “Westworld.”

To me, “Westworld” season 1 is a snapshot of the world that I grew up in. It’s my “Golden Record” of the internet age. It tells a story about love and loss and redemption, but fundamentally, it explores the struggle to maintain our grasp on what makes us human when we have become capable of unimaginable power.

And every time I watch it, I find a new connection to debates raging in our world, ones that the Catholic Church often finds itself in the middle of. Season 1 of “Westworld” offers parallels to the exploitations of the internet pornography industry, and how we can make peace with the inherent violence of it by making its victims less than human. It connects to masculinity and the facsimile of danger and romance that modern tech provides. And then again, it connects to the idea of the immortal soul, and whether that exists, and how to distinguish between humans and conscious computers without one.

As the seasons of “Westworld” progressed, the show lost its power to evoke those existential questions. Though the second season made interesting inquiries into the nature of free will, the narrative structure confused and distracted the viewer from those inquiries. Seasons 3 and 4 were far more sci-fi action than philosophical apology.

The plot and setting of “The Peripheral” strongly resemble its predecessor, a point that critics have not been shy in making. The show tells the story of two siblings living in small-town North Carolina in the near future who inadvertently get pulled into a post-apocalyptic London 70 years in the future through a virtual-reality headset. Powerful, cryptic agents from the future seem set on destroying the family in the past, and the female protagonist Flynne must determine why.

The first season of “Westworld” explores the struggle to maintain our grasp on what makes us human when we have become capable of unimaginable power.

The show has a lot going for it. Jonathan Nolan, who co-wrote mind-bending blockbusters like “Interstellar” and “Inception,” does what he does best in “The Peripheral”: non-linear storytelling that draws us in slowly. Snippets of the past and future are all tangled together, ensuring that a rewatch will be in order once you’ve finished. Chloë Grace Moretz and Gary Carr give strong performances as the series’s protagonists. “The Peripheral” is visually stunning with its vision of a wrecked-then-rebuilt London.

But ultimately, “The Peripheral” fails to capture any of the truly exceptional things that made “Westworld” a game-changer. It’s an action show, and an intriguing one, but it relies on puzzles and special effects to pique the watcher’s curiosity. “Westworld” was at heart a show about ethics, using the possibilities of science fiction to raise questions that stuck with the viewer long after end credits.

I have long thought that science fiction is a genre for reckoning with our humanity by considering how technology challenges it. Audiences want shows that inspire debate and reflection, that make us ask, “What would I do in this situation?” After “Westworld” stopped providing that, and until “The Peripheral” does, those first 10 episodes will remain unmatched.