To Make of Hell a Heaven

“For relief of the Prisoners in the several Gaols, and for the support of Mercer’s Hospital in Stephen’s-street, and of the Charitable Infirmary on the Inn’s Quay, on Monday the 12th of April, will be performed at the Musical Hall in Fishamble-street, Mr. Handel’s new Grand Oratorio, called the MESSIAH, in which the Gentlemen of the Choirs of both Cathedrals will assist, with some concertos on the Organ by Mr. Handel.”
—Newspaper notice, Dublin, 1742

“To harmony like his, celestial power is given
To exalt the soul from earth, and make of hell a heaven."
—From a performance review, 1743

as if it were angel, grapple
its dusty mouth open

until the orchestra would stir,
the chorus rise. I’d hear

chorus of voices a Babel
we could not knock down.

Like the old tower in Kildare,
Conolly’s Folly, stone

on Fishamble Street, the lovers
of charity gathered,

at which a priest leaped from his seat,
literally moved to speak—

Woman, for this be all thy sins forgiven!
Freed hundreds from prison,

this song. WONDERFUL. COUNSELOR.
ALMIGHTY GOD. THE EVER-

deep beneath his heart now surging,
the dam so overflowing

I felt the music sting my eyes.
Without moving my mouth,

I prayed such light would curl inside
our voices when, at last, 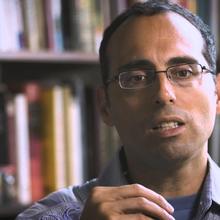 Philip Metres is professor of English and director of the Peace, Justice and Human Rights program at John Carroll University. His latest poetry collection is Shrapnel Maps.