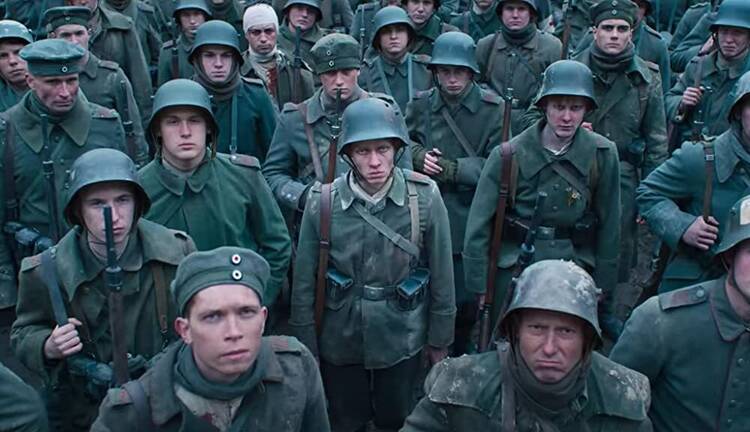 “All Quiet on the Western Front” was released in the United States on Netflix on Oct. 28 (photo: Netfllix).

World War I was a unique combination of devastating cruelty and ideological vacuousness, and as such it represents the essence of war. Its more famous sequel had good and bad sides that were relatively easy to distinguish. In contrast, who of us can say with any conviction that the Allies had an unequivocal moral claim over the Germans, Austro-Hungarians or Ottomans in the 1910s?

Kings and leaders had squabbled over land before, but never before had their pawns been equipped with flamethrowers and mustard gas and machine guns: tools engineered to produce a steady output of death. The Great War—so horrendous that nobody at the time could fathom anything to match its scale again—was merely the first time war was able to bear its ugly countenance without any pretenses of chivalry.

This “All Quiet on the Western Front” does not need special effects to hold its own. It is matter-of-fact, and that is its strength.

“All Quiet on the Western Front” (which was released in the United States on Netflix on Oct. 28) is a documentary of this war, even if it is technically a work of fiction. Director Edward Berger’s German-language adaptation of Erich Maria Remarque’s 1928 novel-cum-memoir (first made into a Hollywood film in 1930) acts like a mirror, one so clear that it shows us the flaws of our past that we would rather ignore.

Compared to other stage and screen depictions of World War I in the past decade, “All Quiet on the Western Front” is not terribly embellished. There is no horse puppetry, as in the National Theatre’s production of “War Horse,” which hit Broadway in 2011. Nor does it have the cinematographic gimmicks of “1917” (released in 2019), which was edited to look as though it was shot in a single take. Even Peter Jackson’s 2018 documentary “They Shall Not Grow Old” based its success on the account of Jackson’s painstaking restoration of war footage (even if it was no less brilliant for it).

This “All Quiet on the Western Front” does not need special effects, starpower or cinematographic innovation to hold its own. It is matter-of-fact, and that is its strength. This is not surprising, as it was the brutal honesty of Remarque’s novel that made it so compelling. All Quiet on the Western Front, the book, was revolutionary for its equally cynical and empirical portrayal of battle. Like a good journalist, Remarque writes with sparse elegance, allowing the frigid mud and bullet-pierced corpses to speak for themselves.

One of the defining features of “All Quiet” is its unflinching portrayal of battlefield carnage.

The narrative follows Paul Bäumer (Felix Kammerer), a young man from the north of Germany who is goaded into enlisting in the army by his friends. “All Quiet” is a portrait of the ordinary amid extraordinary loss, never seeking to persuade with anything more than an accurate representation of the First World War’s battles. Before the end credits roll, a postscript notes how millions of lives were taken for the sake of perhaps a few hundred feet of enemy ground; the battlelines in 1918 did not look much different than they did in 1914. Accordingly, the film’s first shot—a crepuscular panorama of forest—is the same as its last.

Of course, the film is not a one-for-one mimeograph of the book, and some of the novel’s plotlines and characters do not wind up in the screenplay. Some critics have even raised concerns about the historicity (or lack thereof) of the events depicted in the film’s climax. While facts are important, within the context of this story it is more like quibbling: The spirit of Remarque’s book is present in spite of the discrepancies.

One of the defining features of “All Quiet” is its unflinching portrayal of battlefield carnage. Even for someone who has seen his share of slasher films over the years, the detail with which Berger depicts the carnage of World War I is jarring; it is so gory that many people might not be able to make it through the film without feeling faint or sick.

For many films and TV shows, vivid bloodshed is used to compensate for anemic storytelling; when the potency of death is thus diluted, the end result is scarcely more impactful than a computerized spaghetti western. But for “All Quiet on the Western Front,” the violence—desperate violence, never heroic—is the driving force of the story itself, and it is necessary. One of the most impactful moments of the film occurs as Paul and his comrade Albert Kropp (Aaron Hilmer) witness the approach of Allied tanks: Kropp’s eyes grow wide in terror and he gives a primal scream as he watches the tanks crush and explode soldiers as indiscriminately as the Martians’ tripods in “The War of the Worlds.”

“All Quiet” comes to audiences in the midst of the most devastating war in Europe since 1945.

The carnage in the film does no more than embody the reality of World War I without ever overstepping the threshold of plausibility. The film’s portrayal of gouged eyes, clouds of blood and burning bodies can’t be called exploitative when its basis is the real war that itself exploited human lives. After Paul strikes a French soldier in battle, he faces the torture of watching his fellow human sputter blood and struggle to breathe; we are likewise compelled to see what man hath wrought against man.

Yet Berger is able to balance the scale of the bloodshed with the individual humanity of the lives lost. The camera sweeps over no man’s land and surveys the corpses, set in agonized tableau just as they were in the middle of loading a rifle or crawling through the mud. In these shots, each body, each face manages to convey a blooming life cut short. A mass grave is filled with many individual tragedies.

“All Quiet” comes to audiences in the midst of the most devastating war in Europe since 1945. Granted, not every war film will necessarily be a commentary on whatever battle is unfolding at the time of its release. The fields of France are not the Ukrainian steppes: Where World War I was a desperate grab for power papered over with the dregs of gallantry left over from the ancien régime, Vladimir Putin’s invasion of Ukraine is the outgrowth of a deep-rooted genocidal hatred.

But there is a common denominator between World War I and Ukraine. That common feature is senselessness: the willingness of those in power to subject ordinary people to privation and misery, death and destruction, all for the sake of wounded pride.

In the space of less than a year, the headlines about Ukraine have become less frequent and less urgent, matching the public’s dwindling ability to feel shock at the latest revelations of war crimes. “All Quiet” seeks to jolt us out of our languid complacency, sensitizing us to the dismal cries of the battlefield—both World War I itself (which is chronically overlooked in retrospectives of the 20th century) and the wars that scar the earth today.

Disturbing though it is to say, after becoming inured to the atrocities of the current conflict, it is refreshing and humanizing to feel terror again at the sight of war.