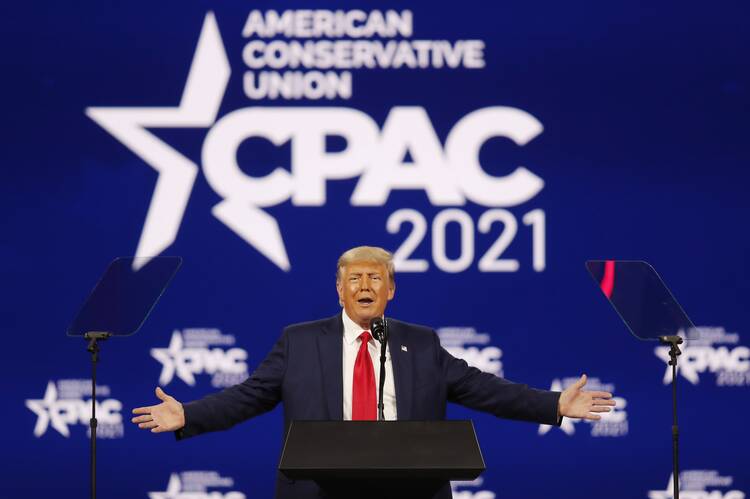 To the Republican members of the Lincoln Project, President Donald Trump was a mean, crass, vindictive race-baiting demagogue teetering on the edge of tyranny and poised to smash the American democratic project into Jeffersonian smithereens. They desperately wanted him to lose.

At a time when so many other Republicans rallied around Trump, this political action committee brought together G.O.P. and former G.O.P. political consultants, campaign managers and media advisors for a multi-platform media effort to defeat both Trump and Republican candidates who supported Trump’s agenda in the 2020 election.

As featured on Showtime’s new five-part documentary “The Lincoln Project,’’ a group of mainly middle-aged white guys rolling up their sleeves to toss out the boor that had entered their social club and thrown it into shambles, may not seem that unusual.

But what was unusual and, well, kind of stunning, was Lincoln Project co-founder Stuart Stevens’s comment about the Trump phenomenon: “I can’t say it’s not my fault.”

I can’t say it’s not my fault. Really? Someone in American politics actually said that?

A longtime Republican operative, Stevens felt Trumpism was his fault because of all the sneering, race-baiting Republican campaigns he himself had engineered for the previous 20-plus years of his political life. (Among others, he was an adviser on the Bob Dole 1996 presidential campaign that featured ads grimly warning us about “illegal aliens” taking over our country.) Looking back, he concluded that his work helped fuel the angry, suspicious, divisive movement that has grown over the years into the even angrier, more suspicious and downright violent, Capitol-attacking political culture of today.

In the film, we see Stevens in a navy polo with the collar popped, or leaning back against a porch deck in a casual black sweater. He has faded, tousle-ish ginger hair. He basically has the air of a yachtsman, or at least a yachtsman’s regular weekend guest. On the outside anyway, Stuart Stevens isn’t a guy who comes off as a regular visitor to the confession booth of public humility.

“I helped elect more candidates than anyone else,” he tells an interviewer in a condo in the Lincoln Project’s Parkland, Utah, headquarters. “Blame me.”

When have you heard that from any public figure lately? Blame me. My fault. And not just an apology at a press conference to quickly put to rest a political scandal. No, this was a taking of responsibility for an entire movement that, as the Lincoln Project’s Steve Schmidt has put it, “has done unspeakable damage to the American fabric.”

We are hungry for someone to own up to anything, not just in politics, but anyplace in our society.

Call me sentimental, call me easily impressed, but I was moved to hear it.

Says Stuart Stevens, “I think in many ways we feel a sense of personal responsibility. Who wants to believe this party you worked in turned out to be, to a not insignificant degree, a force for evil?”

We are hungry for someone to own up to anything, not just in politics, but anyplace in our society. To name what happened and how they are at fault. I started it. And, in regards to the Lincoln Project,I know how to end it. I have the very dynamite to dynamite the dynamite I already planted.

The Lincoln Project is filled with the kind of men who, until 2020, regularly took Democratic candidates to the docks at midnight and, with the concrete boots of merciless political ads and withering debate comebacks, sank them into the oily harbor of political annihilation. They know what they are doing. They know how to win.

As Michael Madrid, another Lincoln Project founder, puts it in the documentary, “The entire party is morally bankrupt. My highest and best use is in burning down something I’d help build up my entire political career.”

Stuart Stevens reflects in wonder at the turn of events they have found themselves in. “You never would have thought that consultants would be the one to save the party,” he said. “Like, we’re the moral voice of the party? Really?”

The front-facing work of the Lincoln Project in 2020 was in quickly putting out creative, viral ads that seized on Trump’s words and deeds and turned them against him. One of their most effective ads was called “Mourning in America” and highlighted how Trump failed to protect the country from the devastating effects of the Covid pandemic.

“If there was no Lincoln Project,” said Steve Schmidt, “Donald Trump would have won by a narrow margin.”

Rick Wilson, who started in 1987 as a consultant to Republican politicians, said the group’s work is in psychological warfare. They are using it to combat the current Republican Party message, which he characterizes as “Unless you are with us, everything will be destroyed.”

In some ways, Wilson and the Lincoln Project’s stance mirrors that of the G.O.P.’s: If Trump wins, everything will be destroyed, so let’s take the gloves off.

When the election was won by Biden, the Lincoln Project claimed that, given their ad buys and voter targeting in a number of swing states, they had made a decisive impact. “If there was no Lincoln Project,” said Steve Schmidt, “Donald Trump would have won by a narrow margin.” Whether they actually did make that kind of impact I leave to political insiders to judge. But that they had an effect is clear. Their public profile had led them to being publicly heckled even by Trump himself. Being vilified by their target was almost a holy grail for the group. The attention immediately helped them raise millions. They had won the psychological war, and then the electoral war.

And then the Lincoln Project narrative changed. It began to no longer fit neatly into the “bad guys ’fessing up and doing good” category. In fact, it got ugly. A story in Axios said that a few of the Lincoln Project founders were planning to take their PAC and turn it into a media company after the campaign. The move, it said, would make them all very wealthy. The group’s supporters (and enemies) questioned whether these political advisers had been “grifting” all along. They were doing this noble work to defeat Trump all in the service of more lucrative payoffs simmering beneath the surface.

Eventually things came to a head with accusations of major financial improprieties, all topped off by a sex scandal.

Eventually things came to a head with accusations of major financial improprieties; bitter public recriminations about leadership roles and compensation packages; all topped off by (almost unsurprisingly, given a group of high-powered men accountable to no one but their own egos) a sex scandal.

It was “discovered” by the group’s leaders (or really, The New York Times made public what the leaders already knew) that one of their founders, John Weaver, had for years been grooming young men. He promised them career advancement in the Republican party in exchange for sex. (One of these correspondences began when one of the males was 14 years old. The Lincoln Project roundly condemned Weaver’s behavior and said they had not known about it.)

The group in some ways could be seen as devolving into the same toxic mess that it accused Republicans of creating. As one Lincoln Project member put it, “The cornerstone of Trumpism is about abuse of power. I feel like I’ve become a victim of the very thing I’ve been fighting against.”

After a leadership shake-up and financial overhaul, the Lincoln Project also continued its work. It rolled out ads and made TV appearances defending Biden’s victory and condemning the Jan. 6 rioters. This year it assisted other Democratic campaigns for the 2022 midterms. (The Lincoln Project appears to have abandoned the Republican party altogether as completely “MAGA” influenced and is endorsing only Democrats.)

Toward the end of the documentary, we hear Reed Galen give a soliloquy about the events that nearly brought down the group entirely.

“We stepped on a landmine and then said, ‘that was fun, let’s do that three or four more times.’...People are saying, ‘What is the Lincoln Project, what is wrong with us?’ We didn’t hold ourselves up to the standards we held everybody else up to. That’s fair. That’s totally fair.”

The final scenes of the film shows the Lincoln Project starting anew, with its leadership down to Galen, Rick Wilson and Stuart Stevens. They would be the first to admit, and they do, that they are not noble and heroic men. But nevertheless, they are shown trying to make some kind of amends and a new start.

On the personal level, confession and penance not only helps save our souls, it can open up a channel within for the good to freely flow out. Fans of the Lincoln Project hope that the good that flows out of their confession is a renewed ability to fight for the common good itself.