Time travel and trauma: Netflix’s ‘Russian Doll’ is an exercise in therapy 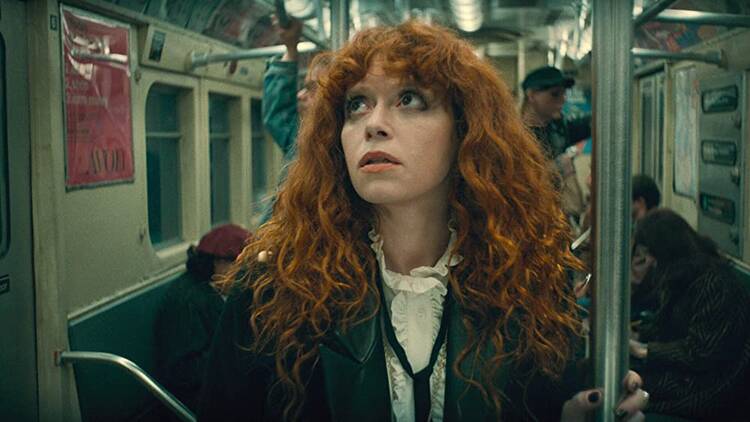 Nadia on the 6 train. Photo from IMDb

“Russian Doll,” the hit Netflix series, is kind of a Jewish “Fleabag” meets time travel, a mind-bending and searingly honest exploration of trauma. Stomping around the streets of New York City, Natasha Lyonne (of “Orange is the New Black” fame) plays the fast-talking, chain-smoking, irrepressibly sarcastic Nadia Vulvokov as she navigates her personal and family history, the fabric of time warping around her.

Much of “Russian Doll” is an exploration of Nadia’s subconscious, shaped by her identity as the grandchild of a Holocaust survivor, a propensity for substance abuse and a childhood marred by her mother’s schizophrenia. The show is a visual expression of the twists and turns of her psyche, the effects of generational trauma and cycles of abuse that are difficult for Nadia to admit or articulate but persistently—insistently—underlie her behavior.

As writer, producer and lead actress of “Russian Doll,” Natasha Lyonne understands this better than most. The similarities of the show to Natasha Lyonne’s own life are hard to overlook: Lyonne’s own identity as the granddaughter of Holocaust survivors, her struggle with addiction, her born-and-bred-New-Yorker attitude. Lyonne hosted the season finale of “Saturday Night Live”; in her monologue, she charted her acting career from being a child star to her sudden (and public) fall from grace. With her trademark blend of piercing vulnerability and caustic wit, she jokes: “So things are going great and then knock knock, who’s there? It’s multiple arrests and drug addiction!”

Lyonne says she has been working on “Russian Doll” in one version or another for almost 10 years. It’s a sort of culmination of her acting and producing career as well as her own life experiences. Perhaps it is not surprising then that so much of “Russian Doll” reads like an exercise in self-therapy.

The similarities to Natasha Lyonne’s own life are hard to overlook: her identity as the granddaughter of Holocaust survivors, her struggle with addiction, her New Yorker attitude.

Season 2 of the show, which recently debuted on Netflix, explores how Nadia’s life has been shaped by the twin forces of mental illness and trauma that defined the women in her family. At first accidentally and then intentionally, Nadia travels back in time via the 6 subway train, finding herself inhabiting the bodies of first her mother Nora, in New York in 1982, and then her grandmother Vera, in Nazi-occupied Hungary in 1944.

When Nadia goes back in time, she thinks she is going to fix her life by righting the wrongs of the past. Nadia’s struggle with substance abuse seems to stem from her unpredictable childhood, where her mentally-ill mother squandered the family inheritance of 150 gold Krugerrand coins, worth $152,780.86. After Nadia’s grandmother saw her family taken to the concentration camps and their possessions stolen, she traded for the coins to protect the family from another Holocaust.

Nadia wants to stop her mom from losing the inheritance, so that she (Nadia) can use it in the future; she views the Krugerrands as not only her birthright, but a sort of reparation for the trauma of her childhood. But time travel isn’t so simple. Time, she discovers, is a closed loop; regardless of how she tries to change the past, the future stays the same. Also, in the process of pursuing her goal, she discovers an unexpected, and in some ways unwanted, empathy for her mother. While living in Nora’s body, Nadia begins to experience the hallucinations of Nora’s mind, and eventually ends up institutionalized in a psychiatric hospital. Seeing firsthand both Nora’s illness and Nora’s own difficult childhood being raised by the disapproving Vera, Nadia begins to understand for the first time the intense pressures Nora was subject to.

"Russian Doll" is a visual expression of the twists and turns of Nadia's psyche, the effects of generational trauma and cycles of abuse that are difficult to admit or articulate.

The cycle of matrilinear pressure comes to a head near the end of the season, when Nadia—in the body of Nora—gives birth to herself on the 6 train platform. Looking at herself as a baby with full knowledge of the childhood she would endure, Nadia vows to raise her(self) back in her present with the childhood she wishes she could have had, so as to finally break the cycle.

It’s a physical manifestation of the idea of reparenting, a therapeutic strategy of treating one’s “inner child” with the unconditional love and support that one missed during childhood due to trauma or neglect. Nadia cradles baby Nadia with a fierce protectiveness we have never seen from her, a maternal instinct that is new for the breezily substance abusing, “live and let live” adult Nadia. But when she brings baby Nadia back to the present with her, it creates a time paradox that starts to unravel the fabric of reality. Despite her desperate desire to parent her younger self, Nadia is forced to return baby Nadia back to her proper timeline, in the care of her mother.

On the train finally returning to the future once and for all, Nadia sees a line of the women who shaped her: her mother, her grandmother and Ruth, a lifelong friend of Nora’s and a rare beacon of stability in Nadia’s life.

Completely unaware of the damage she has done to Nadia, Nora asks, “If you could choose your mother all over, would you choose me again?” Nadia looks from Nora to Ruth, who has been her real mother figure throughout her life, then wryly jokes, “I didn’t choose you the first time.” It’s both an acknowledgement of the trauma of her upbringing and something of a concession to the fact that her mother did her best, as woefully inadequate as that was. Nadia has an opportunity to take her mother to task for her failings and verbalize her clear, life-long desire to have Ruth as her mother instead. But whether out of love, resignation or a new empathy, Nadia lets the moment pass. After an entire season of trying to change her past, it’s a rare and hard-won moment of acceptance.

The show is a physical manifestation of the idea of reparenting, a therapeutic strategy of treating one’s “inner child” with the unconditional love that one missed during childhood.

Nadia knows that when she steps off the train and returns to the present, it will be to a world in which Ruth got sick and died while Nadia wasn’t there. In immersing herself in the past, Nadia missed Ruth’s final days. It’s devastating. After a season of exploring the ways in which Nadia was failed by her real mother and grandmother, Ruth’s maternal love has never been as needed or as miserably out of reach. Looking at a younger version of Ruth before she steps off the time-traveling train and into the present, Nadia says goodbye: “You had no obligation, but you loved me anyways, right? Bye, Ruthie.”

Coming to terms with the unchangeable facts of her childhood and the reality that she must step off the train into a world where she will never see Ruth again both require radical acceptance from Nadia. It’s a therapeutic technique in dialectical behavioral therapy that focuses on coming to terms with the fact that something life changing has happened. Instead of trying to deny her experience, she must accept the damage that has happened, and consider how to adapt to a life in which that damage may now be a defining feature. Rather than trying to deny the reality of Ruth’s death and Nadia’s failure to be with her, she instead has to radically accept the truth of the situation; instead of running from it or trying to make herself feel better, she must learn how to move forward.

“Russian Doll” was always conceptualized as a three season run. But it hasn’t yet been confirmed for a third and final season, and amid Netflix’s dropping profits, it could fall victim to Netflix’s classic two-season-and-cancel tactic. That would be a shame because the season ends in a kind of circularity, with Nadia unable to find a way out of the cycles of trauma and substance abuse. It’s telling that in the three years since the events of the first season, Nadia has changed very little. After two seasons of running around in circles and being unable to escape her own shadow, a third season of “Russian Doll” would need to show Nadia finding her way forward instead of around again—a potentially difficult feat if the third season is to involve some version of the signature time travel of the series.

But after two mind-bending seasons exploring trauma and growth, I trust Natasha Lyonne to do the job and do it well. After all, it seems to pull so heavily from her own life—maybe a Season 3 could show how she herself found her way out of the same cycle Nadia finds herself in. As Lyonne herself said, closing out her S.N.L. monologue: “There’s always hope in despair.”