Move over, Marvel: ‘Everything Everywhere All at Once’ delivers on the real promise of the multiverse 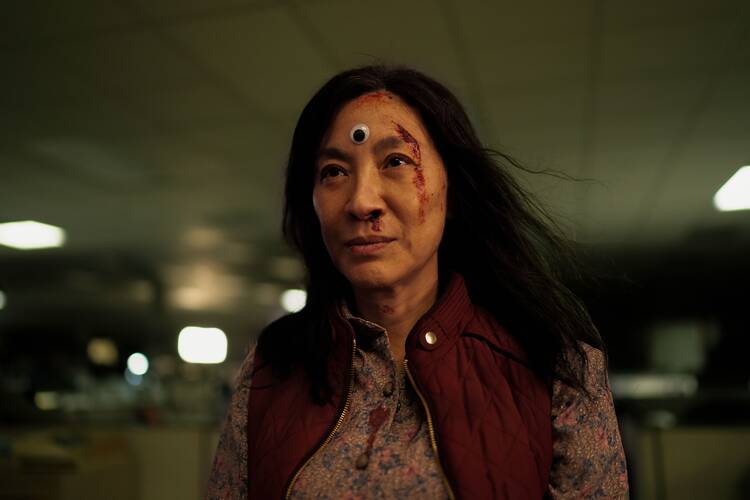 Photo courtesy of A24

The multiverse is having its 15 minutes of fame. It isn’t new to the silver screen by any means; alternate universes have made appearances in everything from “Yesterday,” where the main character is the only one who remembers the Beatles, to the “Star Trek” movies, which take place in a different timeline and history from any of the different TV series. But of late, Marvel seems to be dominating the multiverse game, with big-budget movies like “Doctor Strange in the Multiverse of Madness” coming to define the way moviegoers think about (and see) the multiverse.

But the idea of the multiverse is more than just a way for Marvel to expand seemingly infinite projects, using parallel universes as a get-out-of-jail-free card for any kind of permanent consequence in canon. (Don’t worry—that character death occurred on a different version of Earth, so it doesn’t really count.) In flicks like “Spider-Man: No Way Home” and “Doctor Strange in the Multiverse of Madness,” the infinite power and possibility of the multiverse is mostly used as a way to create character development for a white male lead. But the multiverse is at its best when it isn’t the backdrop for another all-powerful white man, but used to explore the inexpressible.

Enter “Everything Everywhere All at Once,” A24’s smash hit film starring Michelle Yeoh. Grossing over $55 million at the box office, it is A24’s biggest hit of all time and has outperformed blockbuster flicks like Lady Gaga’s “House of Gucci.” In telling a story about complicated mother-daughter relationships and generational trauma, “Everything Everywhere” delivers on the true promise of the multiverse in a way Marvel hasn’t been able to.

The movie bills itself as a sci-fi action-adventure about saving the universe. This isn’t wrong, but it doesn’t even begin to cover the color, campiness and humor that define the film. But rather than a straightforward sci-fi battle romp a la Marvel, the multiversal power struggle really turns out to be an expression of a message about family and acceptance in “Everything Everywhere.”

The multiverse is at its best when it isn’t the backdrop for another all-powerful white man, but used to explore the inexpressible.

The movie follows Evelyn Wang, a Chinese immigrant negotiating a rocky patch with her husband Waymond, a strained relationship with her lesbian daughter Joy and filial responsibility to her elderly father Gong Gong, who has always disapproved of her choices. To add to the pressure, her struggling laundromat business is being audited for exaggerated tax write-offs. While at the IRS, her husband from another dimension—called Alpha Waymond, from the Alpha timeline—takes over the body of Waymond from her dimension. He tells her three things: that the multiverse is real; that it is being threatened by an all-powerful figure called Jobu Tupaki; and that Evelyn is the only one who can save it.

But it becomes clear that the movie is using the multiverse not for sci-fi action but to explore family trauma when it is revealed that Jobu Tupaki is actually Alpha Joy, Evelyn’s daughter. In the Alpha timeline, Alpha Evelyn pushed Alpha Joy too hard; in trying to unlock Alpha Joy’s potential, Alpha Evelyn fractured her mind. The result is the murderously cynical Jobu Tupaki, bent on destroying the multiverse. The only person who can stop her, by repairing their strained relationship, is Evelyn.

The movie deftly taps into a generational cycle of pressure. Evelyn’s father was disappointed in her and disapproved of her marriage. She could never achieve enough to please him, and she takes this intense feeling of pressure out on her daughter, who in turn feels like she isn’t enough for Evelyn. The movie uses the multiverse to illustrate this cycle by showing the different routes Evelyn’s life could have taken. At the center of all of them is an everything-bagel-turned-black-hole (again, the movie is campy) created by Jobu Tupaki, threatening to suck in all of reality and destroy the multiverse.

The black hole is representative of the emptiness that Joy feels; the only way to fight it and save the multiverse is to overcome the cynicism, anger and hurt that define Jobu Tupaki, filling the emotional hole created by feeling she couldn’t live up to her mother’s standards. Much of this feeling of not being good enough comes from Evelyn’s halfhearted acceptance of Joy’s sexuality. Evelyn doesn’t want Joy to come out to elderly Gong Gong, for fear of badly shocking him. Joy tries to come out anyway, but at the crucial moment she forgets the Mandarin word for girlfriend, and Evelyn steps in to introduce Joy’s partner as just a friend.

Simmering under the surface of the martial arts sequences, colorful high couture and ridiculous universes is the central tension of Evelyn’s struggle to connect with Joy.

As Evelyn unlocks her power in the fight against Jobu Tupaki and learns to jump across dimensions, she experiences other timelines: one where she never married her husband and becomes rich and famous; one where life never evolved and she is a sentient rock; one where she works with a chef who is controlled by a racoon pulling his hair, “Ratatouille”-style. But simmering under the surface of the high-velocity martial arts sequences, Jobu Tupaki’s colorful high couture and the ridiculousness of some of the universes is the central tension of Evelyn’s fight against herself and her struggle to connect with Joy.

Through experiencing these different dimensions, Evelyn learns to let go of her resentment of the way things could have been and instead embrace love and acceptance, releasing the pressure she seems to have felt all of her life. It is only through the multiverse that this is possible, showing what is, what isn’t and what could have been. Eventually, the frenetic universe-jumping creates a longing for the ordinary and predictable world that Evelyn came from, familial strain and struggling business and all.

It doesn’t seem like a coincidence that in one of the universes, Evelyn is gay and needs to come to terms with her feelings. Though that universe is also played for laughs—everyone has hot dogs for fingers, and Evelyn’s partner is the evil IRS agent from her original dimension—the empathy it teaches Evelyn plays a role in her eventual acceptance of Joy’s sexuality.

Reconnecting with her husband and embracing his cheerful, loving philosophy becomes the key to the final fight sequence. Instead of trying to maim and kill Jobu Tupaki’s soldiers, Evelyn uses her powers to give them what they desire, using love instead of fear to fight. It allows her to finally go toe to toe with Jobu Tupaki, telling Joy that as her mother, she will always love her. It is through love and understanding that Jobu Tupaki is overcome. Back in Evelyn’s original dimension, she reconciles with Joy, introducing Joy’s girlfriend to Gong Gong.

With the story of a Chinese immigrant and her gay daughter, “Everything Everywhere” finally unlocks the potential of the multiverse to tell diverse stories and communicate emotional truths.

In telling the story of a Chinese immigrant and her gay daughter, “Everything Everywhere” finally unlocks the true potential of the multiverse to tell diverse stories and communicate emotional truths—the immigrant struggle, the difficulty of family relationships, the love of a mother for her daughter—that are harder to express through more conventional means. It’s not just the backdrop for another white man to learn a lesson about power. It’s a way of exploring all the generational forces that play into the creation of a figure like Jobu Tupaki: tough love from parents, disappointment with the unglamorous reality of the American dream, a loving desire for children’s success that can be taken too far.

Speaking about the importance of the movie, Michelle Yeoh said that with superhero roles, “it’s always the guys who seem to be first in line for it. Why is it that we older women cannot be the superhero?” For Yeoh, “One of the most important things as an actor was this ordinary housewife needed her own voice. You know, she’s the woman that you pass by when you go to Chinatown or in the supermarket. It could be any immigrant woman.”

In using multiple worlds to tell a story that is ultimately about a family’s conflicts that are both deeply ordinary and yet totally, universe-endingly essential, “Everything, Everywhere, All at Once” unlocks the true promise of multiversal storytelling. Maybe Marvel can take a few notes.