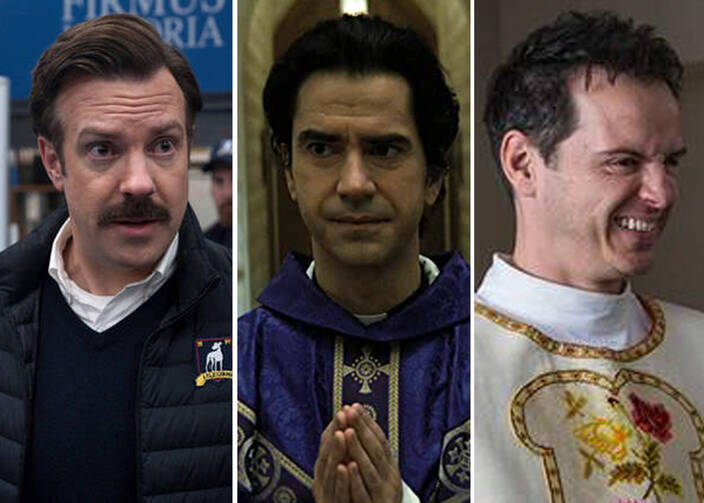 Erin sent me a short video telling me to drop everything and watch “Ted Lasso.” I talked to Rob on Facetime and he said I really should see the new BeeGees documentary. Bill tells us all how good “Dopesick” and “Reservation Dogs” are. Carey texts to ask me if other people have asked me if I have watched “Midnight Mass.” I tell her no, they haven’t, and that I haven’t watched it. Carey asks, “Have you not watched ‘Midnight Mass’ for a reason?”

Bill, a different Bill, when I tell him I haven’t seen…what…this was 23 years ago so I don’t remember exactly…but something like, you know, “Duck Soup” or “Nosferatu” or “The Seventh Seal”...when I tell Bill I haven’t, he all but rolls his eyes; he all but sighs deeply and sadly, as if plunged into catastrophic mourning; he all but pukes all over my non-Bergman-esque cashmere sweater when I tell him I haven’t seen these movies. Maybe it wasn’t a cashmere sweater. Maybe Ingmar Bergman doesn’t even wear cashmere.

My heart is not large enough, my consciousness is not spacious enough for all the spot-on characters, the hectic energies. I am not skillful, I think, at TV.

Jake tells me I should really watch “Derry Girls.” And, of course, “Fleabag.” Jim and his girlfriend Sophie tell me, as if obviously, as if one must sleep, must eat, clearly, that I have to watch “Fleabag.” Actually, I don’t think they even said the words. I think they just looked at me; when I told them I hadn’t seen it, they just breathed at me in hopelessness, exhaled at me in pure despair.

I think I have a sign permanently affixed to my shoulder blades: Tell me shows to watch.

The last Super Bowl I saw was the last 10 minutes of the one that ended in that interception that allowed the team and the QB nobody likes except the people who like them to win like their 10th straight Super Bowl.

Luke says “The Wire” is as good as a Dostoyevksy novel. I watch “The Wire.” I stop three-fourths of the way through Season 2. “The Wire” is too good, too real, too intense, too heartbreaking. I fear for the characters, I sense they are all heading to doom. I sense everything on “The Wire” is and will always be falling apart. I sort of believe this in real life too, more days than I care to admit, doom and everything falling apart, but I don’t want to watch a show that believes the same thing.

Everyone says I should watch “The Sopranos.” I get midway through Season 3. I stop.

Everyone says I should watch “The Sopranos.” I get midway through Season 3. I stop. I stop cold turkey. I am starting to think like Tony Soprano, view the world like Tony Soprano, hungering to solve all my problems like Tony Soprano. Threats of great and reprehensible violence, if not the actual thing. You threw the chicken salad out? And it was still good? Come, let’s go for a ride on my boat. Just a daytrip. “The Sopranos” enters my bloodstream, careens through my synapses, invades my moral foundation. I put the weapon of “The Sopranos” down as if it were a terrorist threatening the hostage of myself.

You should see “Breaking Bad.” I saw the first two episodes. Same thing. Excellent, and just too much.

“The West Wing” is horrific. And so well drawn and styled it is completely addictive.

I saw “The Office.” The British one. It is very good, it is very funny, it is excellent, it makes my soul hurt.

Are people who want us to watch things actually out to bring quality entertainment into our lives? Are they out to make us happy? Do they have our best interests at heart? Or are they just trying to get us to affirm what they themselves already believe? Are they simply attempting to drum up a little army of people who like the same things they like? What exactly are their motives?

No one has told me to watch “2 Broke Girls.”

When I asked Tom if he liked “Downton Abbey,” he all but said Duh. As in, are you even alive?

One of my favorite Onion headlines is from sometime in the mid-90s: Area man constantly mentioning he doesn’t own television. “Oh, are you guys discussing that show about those good-looking pals who live in New York City?” our area man says at a party. “What’s it called? I haven’t seen it. I don’t own a TV.”

I don’t know if I am a publicly righteous area man, or if I just can’t take it all in, the shows, the films, the games. I think my heart is not large enough, my consciousness is not spacious enough for all the spot-on characters, the hectic energies, the ripping stories. I am not skillful, I think, at TV.

When I asked Tom if he liked “Downton Abbey,” he all but said Duh. As in, are you even alive? Which I think is an implicit command: Watch “Downton Abbey.” Now.

Or maybe saying Duh is an implicit dismissal: Don’t bother, you are not worthy of “Downton Abbey.”

Maybe because all the pain and drama, all the septic cultural intrigue and symbolic murder in “The Crown” is happening in another country; and a country, no less, with people the timbre of whose dialects and the mist of whose hills somehow distance me from feeling so intensely the white-hot tragedies they are feeling. The pain of the British is quiet and brittle, not baroque and faltassic, like American pain and tragedy. British tragedy doesn’t wallop me like a dead carp across the face. Faltassic is not a word.

I did watch, recently, three documentaries. A kid got killed. An art heist. A fake art scam. They were all pretty good. My heart is getting filled even more. How much can it take?

Somehow reading doesn’t stuff the heart, it just widens it. Something like that.

I was about to say “that’s a pretentious thing to say, that unlike television, reading widens the heart.” But I’m not going to say that, because I think it’s true. Reading somehow lightens, even if it’s heavy.

In 1995 in the streets of Dorchester, Mass., Scott Campbell Best explained nearly all of “Pulp Fiction” to me, essentially saying I should see it. Years later, when I joined the Jesuits, my novice master told us all we should see “The Matrix” because it was a cultural touchstone. I never saw “The Matrix.”

Aiden said I really need to see, I really ought to see, “Winter Light.” Bergman. It has a priest in it. He told me this by a lake in Vermont, Aiden did, in the summer of 2016. A priest in it or someone who once talked to a priest. Something like that. I should see it.

When I told Liz I had not seen “Toy Story 3,” I think, if I recall this right, she punched me across the face. And then did it again. I still haven’t seen it.

The video message from Erin was sent on an app called Marco Polo. Marco Polo is a thing where, uh, it’s an app where you can send video messages to people, and then they can send ones back to you. Erin sends me Polos all the time. I watch the Polos. I do watch those. She’s a good Polo maker. She sends me a Polo and insists I watch “Schitt’s Creek.” (How do they get away with that title?) I haven’t watched “S—t’s Creek.” Maybe I never will. Maybe I am totally missing out. Who knows?

A few months ago I had an audition for “Law & Order: Organized Crime.” If I got the role, I would have played a witness to a murder. Then later in the show would have been found out as having committed the actual murder. Then I would have given evidence that implicated someone even worse than me. I did not get the role. But I would have no problem being on this show, and okay, even maybe watch it to see how I did.

Since the writing of this, I fell under the spell of a particularly aggressive cold, and I finally fell out of Area Man’s good graces. I watched, like, seven movies in about two and a half days. One of them was the cold-war thriller “No Way Out,” starring Kevin Costner. It is awesome. He’s a strong actor people, accept it. Y’all should see it.