The 2022 Foley Contest: Poetry that speaks the unspeakable about the tragedy in Ukraine 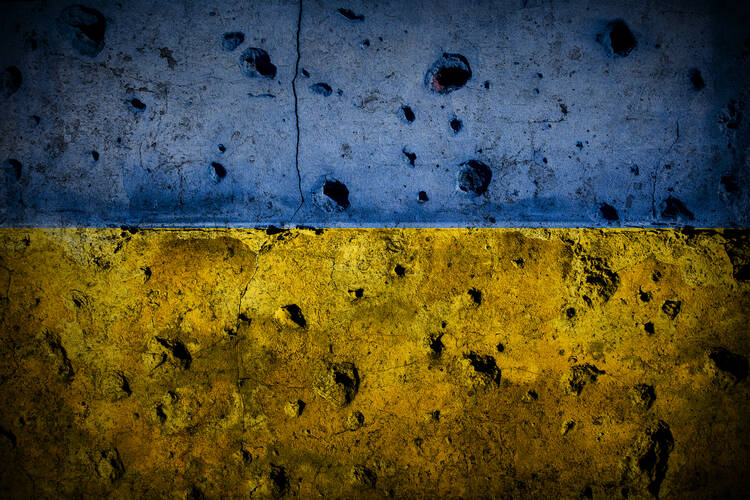 photo from GoodLifeStudio on istock

How do you address something so disturbing, so brutal, but at the same time elusive and diffuse as a war? Especially such a brazen act as Russia’s invasion of Ukraine. What are the options? Taking up a weapon, or marching in a public square, or praying, or frantically drawing wild circles in the air; resorting to sheer silence; or, if you are a writer, crafting a poem.

The 2022 Foley poetry contest brought in more than 600 poems this year, from all over the world. They were about everything and anything: John the Baptist, the Wando River, chocolate éclairs, difficult breakups, lamp posts, the Annunciation, a Trojan horse in a Blockbuster parking lot, John Coltrane, the Year of the Tiger, a gas station, the Madonna of the Goldfinch on a sewing box lid and everything in between.

How do you address something so brutal, and elusive, as a war?

As the contest stretched into March, more and more poems came in about the ongoing nightmare-tragedy in Eastern Europe. We regularly receive submissions about current events and the world’s troubles, but these felt especially urgent and poignant. Below are fragments of poems that, while not contest finalists, nonetheless provide one more way for America to shine a light on the ongoing horror in Ukraine.

From Peter Cline’s “Pecherska Molytva”:
We are the midge in monster’s mouth
Chewed up and spit out hastily.
But He protects his little ones
And exposes villainy.
Let not the hatred and the fear
Fill us with dreams of bloody deeds
For agents of our destruction.

“Four Freedoms,” by Carolyn Oliver, reflects on the photograph, which has become one of the war’s iconic images, of a family killed by a Russian bomb attempting to evacuate across a bridge over the Irpin River:
Today it does not take so long to make a picture speak:
These four could be sleeping on the street:

a woman, two children, and a man alone
bleeding, soldiers trying to save him,

him alone left to save after the shell blast.
You and I know their effort will fail…

From “Crossing” by Deborah Shore:
In my dreams, young poets from Ukraine
give readings about the war.
They must have been among the littlest
when they came, for no accent remains.
One shares that she’d prayed to die
if both her parents did,
but lived. She says it plain,
without regret for her own ending.

In his poem “In Time of War” (from a country on Vladimir Putin’s hit list), Donald Adamson looks at the very act of looking at the war:
As the war draws closer with pictures
of a little girl killed, a mother wailing,
a mud-stained rescuer digging through rubble
I chide myself that I do not weep within,
that my outrage is helpless, numbed, not a dam bursting
behind the skull…

From “Fermenting Evil of War in Ukraine” by Goran Gatalica:
they killed my brother
near the Zaporizhzhya nuclear plant
like predators
my great brother was brave
his body was found in the mud
with crucifix on his chest
my only brother
my only brother…

While it did not address the war in Ukraine, the winning poem in this year’s contest, “In Copenhagen,” by Lisa Mullenneaux, covers all-too familiar territory. It is a searing piece of writing whose gifts do not come gently. Runners-up, to be published in subsequent issues, are “The Fall,” by Chiwenite Onyekwelu (also a Foley runner-up in 2020), “Discernment of Spirits,” by Mia Grogan, and “Lord of Hope & Misery,” by Diane Glancy.

A word of thanks to our O’Hare fellow Sarah Vincent and last year’s Foley prize-winner, Preeti Vangani, for joining me as contest judges. We encourage the poets among us, and the non-poets, to keep writing. In a poem, even cursing the darkness can be the lighting of a candle.