Media elites are mystified by the success of ‘Yellowstone.’ But the show is a biblical epic. 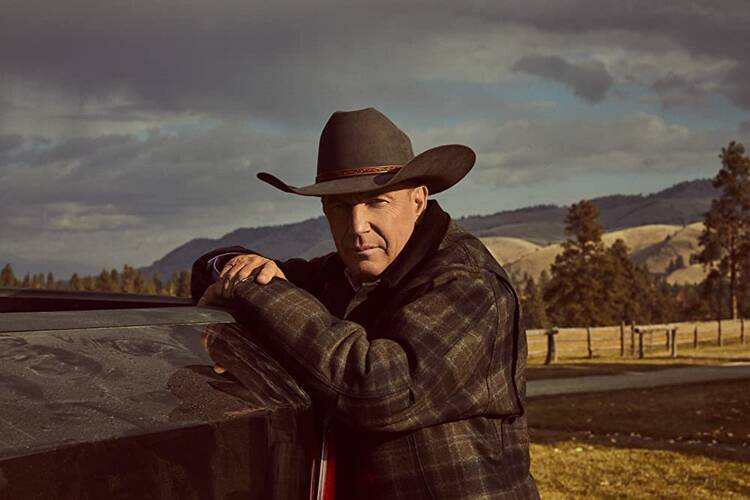 “Every millionaire I know wants to be a cowboy. Authenticity is the one thing that money can’t buy.”

Authenticity, our hunger and desire for it, is the secret of the stunning success of “Yellowstone.” Unlike the cartoonish, Trumpesque “Succession,” Paramount’s wildly popular story of a ranch family under siege captures the anxiety, fear, confusion, complexity, familial disintegration and, most vividly, the violence of our times.

The Jesuit philosopher and theologian Bernard Lonergan taught that authenticity leads to progress; its opposite causes decline. Today we ask: Who is truly authentic? Whose justice, religion, culture, political economy, way of life foster worthy and challenging values and ideals? “Yellowstone” responds to these questions.

Put briefly: The Duttons are in danger of being taxed off their land. There’s a lot of it: They own a portion of Montana the size of Rhode Island, some 1,200 square miles. The threat to them comes from outside developers, like the oxymoronic corporation “Market Equities,” who buy up surrounding properties, inflate the land’s value and raise taxes beyond what the settlers’ descendants can afford. Hovering over all is the shadow of the past, and present-day reactions to the original stealing of the earth from its original inhabitants.

William Faulkner famously wrote, “The past is never dead. It’s not even past.” “Yellowstone” is immensely popular in some parts of the United States and yet invisible in others. Why? Because “Yellowstone” taps into much that is profound and powerful about our present, our past and our precarious future. People who smoke cigarettes and drink beer often realize this better than those in faculty lounges and corner offices.

Reason reports that “media elites” are mystified by the success of “Yellowstone”: “It is not… saying anything grand or sweeping about our world.” And yet 11 million watched the “Yellowstone” finale (only 1.7 million saw the finale of “Succession”). “1883,” the new prequel to “Yellowstone,” has 5 million viewers, the biggest start for a cable show in over five years.

“Yellowstone” is telling us much to which we should be attentive. The show is all about life and love, violence and violation, death and destruction, stories as old as the Bible and as contemporary as climate change. Kevin Costner and Taylor Sheridan have graced us with a biblical epic, Genesis with guns. It’s a contemporary Cain v. Abel in which who is one’s family is clear, but who is one’s brother or sister is murky. The Duttons put the capital “D” in dysfunction. Money and power struggles are just the surface. Lurking beneath and behind the story are the primordial and primeval realities that form us and make us whole or design our demise.

The overwhelming response to any threat in “Yellowstone” is unbridled violence: verbal, physical, high caliber, often deadly. This is “The Godfather” on steroids, “Natural Born Killers” in the mountains. Kevin Costner’s John Dutton and Tony Soprano are blood brothers. Yet the Duttons aren’t the outlaws. In Montana, they are the law. And the law serves their interests as well as their skewed and complicated morality.

The American West paved the way for the Dutton legacy (viewers can read Hampton Sides’s book Blood and Thunder, S. C. Gwynne’s Empire of the Summer Moon and Dee Brown’s Bury My Heart at Wounded Knee for greater context.) Our United States was born in blood and terror, creating amazing fortunes for a few while leaving others to starve and freeze on poverty-riddled reservations. Most do not consider the brutal violence that structured the world for those who now live between the Rockies and the Alleghenies. Today’s perpetually squeezed and vanishing middle class in “flyover country” feel and fear that what is happening to the Duttons is also happening to them. Even those in law offices, medical group practices and middle management know their perches are precarious.

A clear and present danger in so many arenas today is the divide between those who welcome and foster change because it benefits them, and those who resist it with all their might because they are being sacrificed on the altars of crony capitalism’s “progress.” John Dutton hates change. Change means his world disappears. As he announces his run for governor, he defiantly proclaims, “I’m the bulwark against progress. If you’re for progress, don’t vote for me.” In a previous episode, as Dutton lies recovering from an assassination attempt, his extremely troubled daughter Beth is asked what’s killing her father. She replies, “The 21st century.”

Today, who gets to decide how our world(s) will be? Whose authenticity? Are we the land of cowboys and wide-open ranges, where we roam under starry skies, unfenced and free? Or are we hip urbanites, slurping $5 Starbucks lattes, happy to rent 300 square feet in New York City for $3,000 a month? For the Duttons, “progress” portends destruction and death, not only of their livelihood, but of the very “Amurica” enshrined in Westerns.

Interestingly, in “1883,” the prequel to “Yellowstone,” what is happening to the Duttons is juxtaposed against similar dynamics that destroyed the way of life of tribes like the Shoshone and Arapahoe. And once again the past is never over, not even past. In “Yellowstone,” the Duttons fear and fight not only coastal corporate raiders who want to create a new Aspen a few miles from Yellowstone National Park; they are being threatened by the local tribe’s chairman, Harvard M.B.A. Thomas Rainwater, who dreams of reclaiming lands stolen from his ancestors, using the thieves’ descendants’ own resources, which are willingly provided by patrons of the tribe’s lucrative casino.

Most viewers of “Yellowstone” likely fiercely support capitalism and have a visceral reaction to the word “socialism” (even though we all live in a mixed socialist-capitalist economy). Let me give an example from my own life. In Cody, Wyo., a guy brands Bernie Sanders a “socialist.” Knowing how angry he is with outsiders buying up land near Cody and prohibiting hunting and fishing where he had done so as a boy, I gently challenge him. “You’re a capitalist, right? You say that Bezos made ‘his’ money and he can do what he wants with it. So, are you O.K. with him buying all of Wyoming and kicking everyone out?”

In “Yellowstone,” Kayce Dutton, the extremely violent ex-soldier, explains to his small son at one point, “a transplant is a person who moves to a place and then they try to make that place just like the place they just left.” The boy replies, “That don’t make sense.”

“Yellowstone” preaches that deep down we all dream of an authentic life, a good life unpolluted by chaotic change.

Much of what is going on in the United States today makes no sense to people caught in the machinations of global capitalism’s political economy. People cannot comprehend nor counter those who wield power. Trust is in short supply. Even John Dutton doesn’t trust the system, and he is the system. Families, churches and communities are blown apart by everything from unemployment to opioid addiction to political polarization. Many recognize that “Yellowstone” is telling our story.

We are the stories we tell. How we went from “It’s a Wonderful Life” in 1946 to “American Beauty” in 1999 to “Succession” in 2021 is a long, sad tale of decline. John Dutton confesses to the local priest, “I’ve seen too much evil to believe there’s a God.”

“Yellowstone” preaches that deep down we all dream of an authentic life, a good life unpolluted by chaotic change. A life where hard work is rewarded, where someone’s word is their bond, where you can depend on the guy or gal working next to you. “Yellowstone” says we all want to be cowboys and cowgirls. It is a hope for a place and time where we can roam free, living in the joy of the open range.

In interesting ways, the aforementioned Father Lonergan’s vision of a future “Cosmopolis” envisaged and articulated in his book, Insight, can help us to understand how we can reinstall the beneficent graces of God’s progress. In Father Lonergan's vision, Cosmopolis “is concerned with the fundamental issue of historical process.” What is the goal of Cosmopolis? “[T]o prevent formation of the screening memories by which an ascent to power hides its nastiness; it is its business to prevent the falsification of history; it is its business to satirize the catchwords and the claptrap and thereby to prevent the notions they express from coalescing with passions and resentments to engender obsessive nonsense for future generations; it is its business to encourage and support those who would speak the simple truth though simple truth has gone out of fashion.”

Like Cosmopolis, “Yellowstone” and its characters tell truths many cannot hear or bear. The beauty of the land, the goodness that ought to be, is mired and obscured in the evil of both the past and the present. The ultimate truth “Yellowstone” reveals is our desire for true justice and a future liberation.

Richard G. Malloy, S.J., is Director of Mission and Ministry at Cristo Rey Jesuit High School in Baltimore, Md., and the author of Being on Fire: Top Ten Essentials of Catholic Faith and Spiritual Direction: A Beginner's Guide.