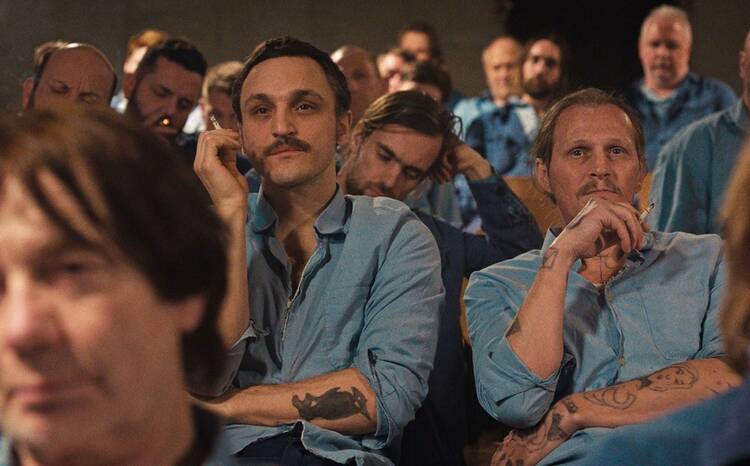 The new German historical drama “Great Freedom” opens with surveillance footage of a public toilet. The industrial shuddering of the film projector provides the only soundtrack as we—and someone else—watch men enter the toilets and find sexual partners. This scene sets up the movie’s plotline: Hans Hoffmann (Franz Rogowski) will return to prison after yet another violation of Paragraph 175, the law prohibiting sexual contact between men. But it also encapsulates the movie’s themes, and the artistic techniques by which the writer and director Sebastian Miese illustrates those themes.

“Great Freedom” is about the longing for connection, under circumstances where connection with another person will be punished with isolation, no matter how squalid, brief, unintelligible or unfree—not love exactly, or not always, but the result of the same need within us that drives us into love.

‘Great Freedom’ is an exploration of the nature of eros: the many acts, only some of them sexual, toward which it can propel us.

The film covers two time periods: the immediate aftermath of World War II and the late 1960s, at a time when West Germany revised the law to allow consensual sex between adult men. The opening surveillance scene takes place in 1968. Then, in prison, Hans reunites with Viktor (Georg Friedrich), a convicted murderer who teases Hans about his mustache (“Is that what the f-----s are wearing now?”), finds ways to feed a heroin addiction behind bars, and seems to have a long history of antagonistic fondness toward Hans. When other prisoners get aggressive with Hans’s sexual partner, the teacher Leo (Anton von Lucke), due to the nature of his crime, Hans jumps in to protect him and winds up in solitary—stripped to his underwear, in blank darkness, exposed to the audience in intermittent flashes of a match or openings of the grate in the door, which light his flesh and shadow the ribs beneath like Spanish Counter-Reformation painting. In total darkness we flash back to 1945.

A younger Hans enters this same prison, starving and with his head badly shaved, and we guess what his new cellmate Viktor does not: that he has been taken directly from a concentration camp to prison, in both cases due to Paragraph 175. This happened to an unknown number of gay survivors; the regulations governing the American occupation zone required “ordinary criminals” who had not completed their full sentences to be transferred from the camps to civil prisons.Moreover, some who were freed at the liberation of the camps were soon reimprisoned for new violations of the sodomy laws.

The film covers two time periods: the immediate aftermath of World War II and the late 1960s, at a time when West Germany revised the law to allow consensual sex between adult men.

This real history adds urgency and anguish to a film that swerves away from the certainties of the “message movie” into the mysteries of fable. Viktor at first loathes Hans; pity reshapes Viktor and spurs the two prisoners to help and sacrifice for one another. Past and present interweave as we piece together the ways that the lives of Viktor and Hans have intertwined over the years. Their growing connection is shot through with coercion—including, but not only, the inescapable coercion of the prison system. But what happens between them slowly, in spite of their silences and others’ surveillance, comes to look like love.

Almost every scene takes place within the gray-blue world of the prison. (Until the end, the outside world is only seen in warm, sun-soaked home-video footage.) There is almost no non-diegetic sound. For about 10 minutes at the beginning we hear nothing but industrial noises and spoken commands. Hans has a twisting smile and muffled speech; he talks like somebody who has been punched in the face. In this manmade world, he insistently seeks love. He makes sacrifices for his prewar lover, now imprisoned in the same facility (the fact that there is only one prison may be one of the film’s gestures toward fable); he makes sacrifices for Leo the teacher, whose job is threatened by his conviction; he makes sacrifices for Viktor, even though nobody names what they might share as “love.” Each of these sacrifices is punished with solitary confinement.

This history adds urgency and anguish to a film that swerves away from the certainties of the “message movie” into the mysteries of fable.

Hans is canny, not lugubrious. His life has been distorted by the punishments meted out for his sexuality—I’m not sure you end up on police surveillance footage of public toilets without that distortion—but he has found ways to adapt and survive. He still wants to share his life, and still wants freedom. Viktor, who at first seems like the classic prison “old head,” may be more damaged and ambivalent. Hans does his best to rescue Viktor from the solitary cell he has created within his mind. And then the event the movie’s title and timeline have been pushing toward occurs, and the law is changed—freeing only one of them.

The movie’s final sequence takes place in the free world. We see “Great Freedom” for the first time: It’s the name of a jazz club with a sex club underneath. Hans wanders through the little knots of men seeking something in one another’s bodies—always something more than pleasure—and where the movie’s opening scene pushed us to recognize the connection made possible by even the most degraded and policed sexual encounter, this scene pushes us to see the alienation inherent in even the most liberated one.

“Great Freedom” isn’t a tragedy. It’s more like a joke—it even has a punchline! There are small moments of gallows humor, as when Hans suggests escaping to a place with lighter penalties for sodomy—or, as Leo repeats with incredulity, “You want to escape to East Germany?!” There are small moments of gentleness, when even the camera offers a little sheltering privacy. The film is an exploration of the nature of eros: the many acts, not all of them defensible or intelligible, only some of them sexual, toward which it can propel us; the ways it isn’t freeing, but may be healing; the ways it can be warped but never fully caged.

Eve Tushnet is the author of four books, most recently Tenderness: A Gay Christian's Guide to Unlearning Rejection and Experiencing God's Extravagant Love and Punishment: A Love Story.