Marshall McLuhan, the Catholic thinker who predicted the internet, spent his last days praying with a Jesuit 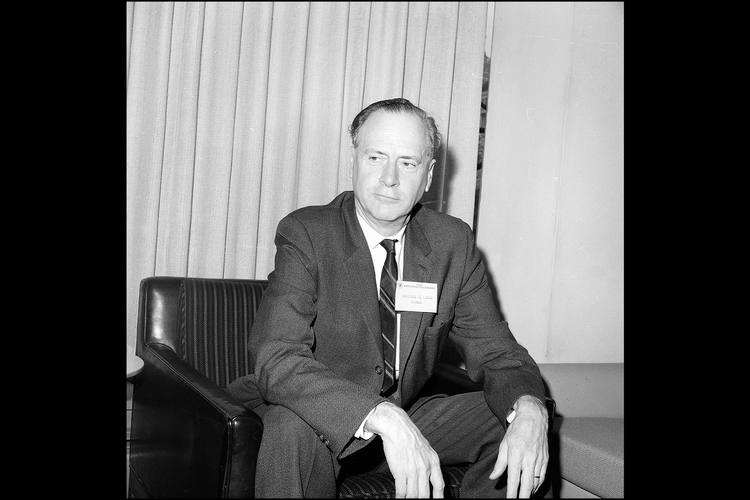 Marshall McLuhan, the pop culture sage of the electronic world and a Catholic convert, spent the final days of his life with Frank Stroud, S.J. During those last days of 1980, they read, laughed, drank wine, smoked cigars and prayed together—a fitting end to a life shaped by faith and anchored in the Ignatian tradition.

During the height of his influence, McLuhan was the most public of intellectuals. He toured the United States and Canada, appeared on television and radio shows, chatted with John Lennon and Yoko Ono and was the subject of feature articles in magazines as varied as Esquire, Vogue and Harper’s. The New York Times ran 27 articles about him in 1967 alone.

Marshall McLuhan, the pop culture sage of the electronic world, spent the final days of his life with Frank Stroud, S.J.

The entertainment, media and academic worlds of his heyday had good reason to miss the Christian foundations of his theories, for there is evidence that McLuhan, sly rhetorician that he was, made subtle his religious sensibility. Yet it is telling that some of his earliest and most vocal defenders and explicators were Jesuit priests, intellectuals equally comfortable wading through esoteric theology as they were moving among the secular masses.

McLuhan’s Christian belief and worldview are no mere biographical footnote. They offered him pliable metaphors for the intersection of the material and the spiritual, engendered in him the confidence and determination of a religious adherent and compelled him to react to the rapidly changing electronic world around him. Any honest and thorough analysis of McLuhan’s paradigm-changing views must not merely begin with these religious considerations; it must also examine how his belief sustained the development and dissemination of these theories. McLuhan’s vocation was to understand how the environments created by media shape our perception of the world.

In 1967, John M. Culkin, then a Jesuit teaching at Fordham University, wrote an essay for the Saturday Review magazine that sought to make McLuhan’s ideas understandable to a mainstream audience. “McLuhan’s writings abound with aphorisms, insights, for-instances, and irrelevancies which float loosely around recurring themes,” the priest wrote. McLuhan, he noted, was an observer of current trends, not a creator of them: “[H]e is merely trying to describe what’s happening out there so that it can be dealt with intelligently.” After all, when “someone warns you of an oncoming truck, it’s frightfully impolite to accuse him of driving the thing.” McLuhan was bearing witness.

Culkin recruited McLuhan to Fordham. “Oracle? Genius? Carnival Pitchman?”—the front page headline of the Fordham Ram debated whether McLuhan, the school’s new $100,000 visiting professor, was worth his salary. The Jesuit university in the Bronx bet that McLuhan’s short tenure would be both prestigious and provocative. On Sept. 18, 1967, in front of the 178 students enrolled in Communication Arts 141, Father Culkin said it was “the age of McLuhan.” His students cradled copies of his books. Press at the event pined for interviews. The student writer of the article quipped that McLuhan was the “public relations coup of the year.”

McLuhan was an observer of current trends, not a creator of them.

Embarrassed by the fawning, McLuhan ambled through a 25-minute free associative debut lecture about television, attention spans and how “we do everything we can to hide from the present.” His mind traveled whatever routes it desired, and the audience—captive and captivated—followed. A year earlier, he had offered a pithy explanation of his rhetoric and pedagogy to The New York Times: “I don’t want them to believe what I say. I just want them to think.”

He could afford to be evasive. By that point, McLuhan was an international media star with a healthy sense of humor. During his opening lecture, he joked that the most Canadian thing about himself was how he mispronounced “either” and “process.” Afterward, one student concluded, “It was a good show. All the students were perplexed to some extent, but they’ll catch on.” Sadly, McLuhan’s health declined during that year, and Culkin himself compelled his friend to seek medical attention—leading to surgery to remove a brain tumor.

Roughly a decade later, a stroke would render McLuhan unable to read and write, and largely unable to speak. His mind and soul stirred, though, with the arrival of a past acquaintance—Frank Stroud, S.J. The two originally met in 1974, but had been out of touch until December 1980, when Stroud was invited by John Culkin to a film seminar in New York City. Also present was McLuhan’s daughter Teri, a filmmaker who told Stroud that he should “visit her father.” Stroud originally was going to wait until the semester break in January. Instead, “a God-given push” compelled him to travel to Canada in late December. He would be McLuhan’s final visitor.

“A God-given push” compelled Father Stroud to travel to Canada. He would be McLuhan’s final visitor.

Stroud would later note of their time together that “God literally lifted me up from Jersey City and planted me down in Wychwood Park Toronto to complete the Jesuit connection.” Stroud said Mass at the McLuhan home, and “from that moment on Marshall seemed not to want me to leave his side.” They walked together around Wychwood Park. They talked about the many letters and miscellaneous gifts that McLuhan received, including a cartoon sketched by Tom Wolfe. McLuhan listened as Stroud read him selections from articles and books. The last book McLuhan read in his life, or rather listened to, was Ignatius of Loyola, by Karl Rahner, S.J., an illustrated biography of the Jesuit founder.

On Dec. 30, Stroud again celebrated Mass—this time “using a bottle of fine Burgundy a colleague of McLuhan’s had brought back from France.” McLuhan and the priest had cigars and then went down to the basement, where McLuhan kept his television set. He had moved it there a few years earlier: “I did not want it invading my home.” The two watched the 11 o’clock news, then went back upstairs. Before Stroud left they hugged. McLuhan went to bed and was found dead the next morning.

Always more artist than scholar, more poet than academic, McLuhan would likely appreciate that his final act occurred as the year turned to its close. Those last days of the calendar year are often bittersweet: hope for the next year tied inextricably to the melancholy final hours of December; the great joy of Christmas followed by the protracted, almost metronomic waiting of New Year’s Eve. Even our best years never feel quite good enough.

A lover of hymns, perhaps McLuhan had gone to bed humming his favorite selection, “Mine Eyes Have Seen the Glory of the Coming of the Lord.” Hours earlier during Mass, Stroud had intoned the Nunc dimittis, the Song of Simeon. The priest had lifted his hands as if holding the Christ Child and said, “Lord, now you are letting your servant depart in peace, according to your word.” Simeon, now that he had seen the Savior of the World, finally could rest in peace.

Nick Ripatrazone has written for Rolling Stone, The Atlantic, The Paris Review and Esquire. This essay is adapted from Digital Communion: Marshall McLuhan’s Spiritual Vision for a Virtual Age (Fortress Press, 2022)