On William Shatner, Jeff Bezos and deciding whether we live in Heaven or Hell 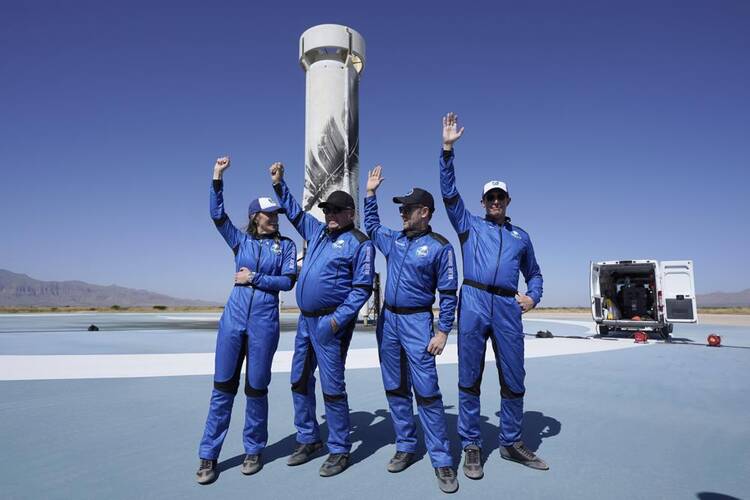 On Wednesday, William Shatner went to space. Woo-hoo, I guess?

I know, I know. It’s Captain Kirk, he’s 90, give the man his moment. I mean no disrespect, even if Kirk was a 23rd-century Ronan Farrow exposé waiting to happen and watching old school “Star Trek” is like trying to find something nice to say about your nephew’s Mars diorama. “Wow, you got the dirt so red, Dylan.”

But if I am being honest, I was appalled to hear that we have apparently now reached the stage where not only billionaires but others are starting to take joy rides into space. And my feelings stem from a pretty straightforward reason: Most of the world remains unvaccinated, with no end to that state of things in sight.

On Wednesday, William Shatner went to space. Woo-hoo, I guess?

If you are vaccinated, do you remember what being unvaccinated felt like? Not only having to wear a mask everywhere but not being able to see your parents or grandchildren or your friends, not being able to take vacations or really go much of anywhere? It was pretty horrible, wasn’t it?

But you know what would make it worse? Being trapped in that same endless purgatory of solitude and Netflix and Zoom meetings while a lucky few enjoy the rich-guy version of a rollercoaster.

To be clear, I am not one of those people who think we absolutely should not be exploring outer space until we have dealt with all the social issues facing humanity. I find the stories and insights of actual astronauts like Chris Hadfield to be challenging and inspiring. If people “could see the whole world every 90 minutes and look down on the places where we do things right,” he said in a 2013 NPR interview, “and look down where we’re doing stupid, brutal things to each other and the inevitable patience of the world that houses us—I think everybody would be reinforced in their faith, and maybe re-address the real true tenets of what’s good and what gives them strength.”

But what Jeff Bezos, Elon Musk and others are doing is the opposite of that: Their rockets seem like a slap in the face to the overwhelming majority of humanity who cannot safely take a ride on a bus, let alone fly into space.

Their rockets seem like a slap in the face to the overwhelming majority of humanity who cannot safely take a ride on a bus, let alone fly into space.

To be fair, Amazon’s founder, Mr. Bezos, has promised 13 billion dollars to various charitable ventures. But at this point he has actually given only $1.5 billion, and much of what is to come will be distributed over long time frames. Elon Musk has promised to give half of his fortune away. As of a year ago, that would mean he would be giving away $34 billion; yet so far he has only given $34 million (yes you read that right). Meanwhile Bezos’ ex-wife, MacKenzie Scott, has donated $8.5 billion to a total of almost 800 different groups, with much of it given in response to various crises caused by the pandemic.

So yeah, I was not a fan of this idea. But then, perhaps like you, I watched Mr. Shatner weep like he had seen the face of God when he got back to Earth. “I’m so filled with emotion about what just happened,” he said to Mr. Bezos. “It’s just extraordinary. I hope I never recover from this.... It’s so much larger than me and life.”

Mr. Shatner, who in addition to being an actor has written books, poetry and games and has a new album out called “Bill,” spoke with great eloquence about the experience of seeing our atmosphere fly by. “Is that the way death is?” he asked, wondering at how instantaneously the “blanket” of blue sky that we take for granted disappeared in flight. “Whoop, and it’s gone? Jesus!”

So yeah, I was not a fan of this idea. But then, perhaps like you, I watched Mr. Shatner weep like he had seen the face of God when he got back to Earth.

Some were distracted by seeing the listening Mr. Bezos turn away from Mr. Shatner as he was talking to grab a bottle of champagne and spray it, seemingly oblivious to the profoundness of the experience of going into space, despite having done so himself just months ago. “I think this is what you act like when you have $200 billion,” opined late night host Jimmy Kimmel.

But the wonder that Mr. Shatner shared in describing just the sky, this fundamental element of our existence, was compelling. When it is especially pretty we might take note of it; in Los Angeles people stop on the beach every evening just to watch the sun set. But more often than not, we do not even take the time to notice it is there. And yet it is all so amazing, really, as the writer Danielle Weisber noted in a tweet just the other day: “I can’t believe I exist on a planet with like aurora borealis and coral reefs and f—— snow capped alps and mossy stones and sparkling waterfalls and I have to do like a career.”

Ms. Weisber’s tweet unexpectedly led many other people to share their own extraordinary, ordinary, beautiful things: photographs of the aurora borealis and the leaves changing color in New England; stories of being chased by bears and seeing ducks in real life for the first time; and the crazy truth that we spend our lives buying furniture and pressing plastic buttons while fungi “eat literal lightning, immortal if lucky, trees give sugar all day, lives in ground.”

But there was one comment that hit me right between the eyes: “Heaven is everywhere,” someone tweeted, “and humans act like it’s hell.”

In the end, there are always going to be narcissists out there narcississ-ing. But even if some of them really may wind us up—Jeff Bezos, when the old man you put in a space capsule starts weeping, put the champagne down!—it is still our decision whether or not to fixate on them. As a little cartoon boy once said to his stuffed tiger, Hobbes, “There’s treasure everywhere.” And better pay attention to it now, because one day, “Whoop, and it’s gone.”