How to renovate a church — without starting a liturgical design war 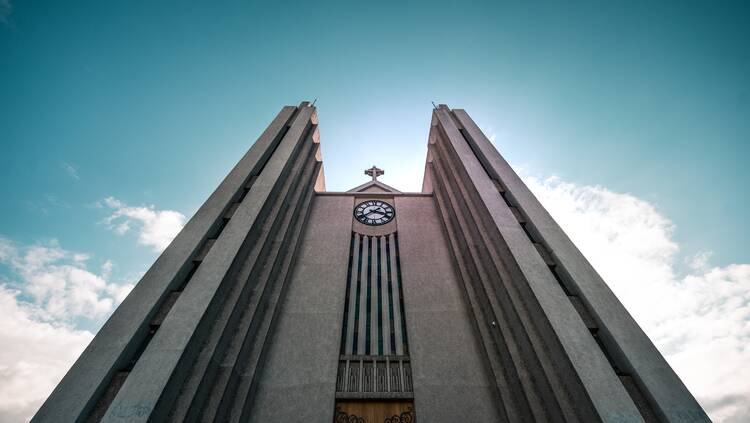 Photo by Lachlan Gowen on Unsplash

We have all heard the stories. You know the ones, shared in hushed tones over the smoldering charcoals of a thurible in the sacristy before Mass; whispered over doughnuts and coffee in the parish hall. The stories of neo-Gothic high altars being destroyed and replaced by a modernist slab. Of the tabernacle being rendered from the center of the parish church and relegated to a chapel of repose. And of organs, stained-glass windows and confessionals whisked away to the dustbin of history in favor of folk group platforms, abstract art and “reconciliation spaces.”

Of course, each of these scenarios would be incomplete without the disdain of the parishioners involved, who feel that their parish church, where they have been baptized, confirmed, married and buried their loved ones, has been stolen from them.

But is any of it true? Or are these stories simply canards spun by the disaffected—the minority in the parish that was heard in the process of building or renovation but did not win the vote?

In order to find out more about the state of American liturgical design and whether or not there really are “design wars” in the U.S. Catholic Church, America spoke with Viggo and Martin Rambusch.

In order to find out more about the state of American liturgical design and whether or not there really are “design wars” in the U.S. Catholic Church, America spoke with Viggo and Martin Rambusch. Viggo Rambusch led the Rambusch Decorating Co. for nearly 30 years, but was directly involved in the family business (founded by his grandfather, Frode Rambusch, in 1898) since beginning as an apprentice in 1947 and still consults from time to time on Rambusch projects. Martin Rambusch, along with his twin brother Edwin, is the fourth generation of Rambusches to lead the company. Martin is chairman and leads the crafts department; Edwin is the president and leads the lighting department.

The Rambusch company has been a leader in secular and liturgical design for nearly 125 years, with commissions including the Waldorf Astoria Hotel, the Empire State Building, the Roxy Theatre, camouflage for American bases in the Second World War and, more recently, the mosaic dome of the National Shrine of the Immaculate Conception, the canonization Mass of St. Junípero Serra, the United Nations headquarters and the refurbishment of the original torch from the Statue of Liberty.

In addition to their work in the arts, the Rambusch family has a long standing relationship with this review. For nearly a century, the editors of America have welcomed the Rambusches as supporters and friends of this ministry. Most notably, John LaFarge, S.J., who served on the staff of this review for 37 years (and was editor in chief from 1944 to 1948), was also chaplain to St. Ansgar’s Scandinavian Catholic League of New York for 35 years. St. Ansgar’s League was founded and administered for a century by the Rambusch family, with the aim of supporting the Catholic Church in Scandinavia.

The Rambusch company has been a leader in secular and liturgical design for nearly 125 years, with commissions including the Empire State Building and the mosaic dome of the National Shrine of the Immaculate Conception.

Additionally, upon the death of Father LaFarge in 1963, the Rambusch family was commissioned to create a set of windows honoring LaFarge’s life and work. The windows were installed in America House on 56th Street in Manhattan in 1964 under the supervision of Viggo Rambusch, who also oversaw their subsequent refurbishment and transfer to the new headquarters of America Media on Sixth Avenue in 2017.

The Vocation of a Liturgical Architect

“The vocation itself is challenging,” Viggo Rambusch said. For Viggo, the role of the liturgical architect is as counselor, ardent listener and one who is focused on enhancing the liturgy while balancing the needs of the community.

“The architect must submit himself,” Viggo said. “In a new building, the architect should submit or subject his design to the primary needs and role of the liturgy and adjust the interior environment to support such needs. He must be sympathetic and understand liturgical ceremonies.”

Martin agreed: “The role that we are being asked to play is a fluid one. Recently, in a few instances, we have acted more as an emotional support group and digging into old problems before we move forward with the new project.”

“Over the last 1,200 years, architectural styles have changed, but basically the essence of our liturgy has not changed. There is an opportunity for good ecclesiastical celebrations in all styles.”

“But when that happens, it’s pretty clear that there is something festering, and you’ve got to get to good, clean ground,” Martin said. “That takes more time than expected, but once it is done, it’s greatly appreciated.”

“Over the last 1,200 years,” continued Viggo, “architectural styles have changed, but basically the essence of our liturgy has not changed. There is an opportunity for good ecclesiastical celebrations in all styles. Gothic, romanesque, rococo, Greek revival, etc.—all of them could have a good opportunity for liturgical celebration.”

There are key elements that both Viggo and Martin would want to see incorporated in any design process. For Viggo, a great deal of what makes a good liturgical space can be summed up in one word: noble.

“You should also plan the arrangement for processions, preaching, group sizes and communal interactions. Details like lighting, flooring and finishes should be attended to. Placement and sightlines should be emphasized,” continued Viggo.

“It should be an uplifting space—soaring,” said Viggo. “Good quality, permanent materials that have nobility to them.”

Of course, there are instances in which the renovation of a church can lead to harsh criticism.

“We’ve all seen neo-Gothic stone buildings with a modern cube altar because they didn’t want to follow the original design,” noted Martin. “Eighty percent of the time people say they want to follow the vocabulary of the building. My duty is to be as informed as possible in regard to trends, appropriate architecture of the building, staying current on education and being an informed person to help people who are not typically paying attention to that stuff be aware of what’s going on.”

“If you’re going to go in contrast to or in tension with the building,” continued Martin, “you’re shooting for the A, but you could also end up with the F. Whereas if you go with the style of the building, you will end up with a solid letter grade.”

Despite the horror stories, both Viggo and Martin emphasize the collaborative nature of parish renovation. Viggo notes that the first step to building a collaborative effort is to recognize the differences among the communities you are working with. The projects must be approached “on a case by case basis, and the parish expresses itself by size, by funding, by needs, by location. The building reflects these characteristics and the personality of the community,” Viggo said. “A Mexican community in Mexico is a very different congregation than a Scottish community in Glasgow.”

“We feel that the best way to get to that place is by facilitating a community to create a verbal and visual goal, and then our challenge is to help them achieve that goal,” said Martin. “It allows people to participate, and no one can say that someone is the bad guy. In our mind, it is a participatory process. It is not dictatorial liturgical design.”

“In our mind, it is a participatory process. It is not dictatorial liturgical design.”

“You must adjust yourself to that particular situation,” said Viggo. “You can’t just ride in and say: ‘This is what we’re going to do. Here’s what I’ve done before, I’m going to do it over again.’ You have to stop and listen to the group, and then you can have success.”

“It’s a healthy thing, I believe, for communities to consider renovating their interior once every generation. I think every generation logically considers repairing, relighting.... I would say that it’s natural for each community to renovate periodically. And, as the liturgy has changed, that has affected the sanctuary enormously,” said Viggo.

Today, though, there has been growing tension around changes in parish communities. “Unfortunately,” said Martin, “the liturgical landscape is in sync with our political landscape—there is separation to either end of the spectrum. There needs to be clear and consistent leadership, and there needs to be honest, legitimate dialogue.”

“There have been instances that I’ve heard about,” added Viggo, “but I’ve been lucky enough in life not to have that happen. I’ve never had a community break down during my effort. I’ve been blessed.”

Martin laid out an example scenario of something he has seen increasingly in recent years: A pastor asked 15 people to be a part of a committee for a parish renovation. All he asked of them was to be able to confirm at the end process: “You were informed of the process, you were included in the process, and that you were aware of what was going on and, as a result, that I have your support for the process.” After a few months, one of the committee members says that they are unhappy and that they are not being heard and, as a result, they leave the committee. What was really happening was that they were being outvoted.

“Unfortunately,” said Martin, “the liturgical landscape is in sync with our political landscape—there is separation to either end of the spectrum.”

“If people don’t accept leadership, then there is no ability to lead. Instead of saying, ‘I lost the vote but my voice was heard,’ people are saying, ‘No; I’m going to throw the whole thing out,’ and that confuses people when you’re trying to be transparent,” noted Martin.

For both Viggo and Martin, the challenge today, even in a polarized time, is to re-emphasize the basics: reverence and renewal.

“The challenge,” said Viggo, “is to keep the liturgical ceremonies reverent and meaningful, and not allow their actions to become commonplace, banal or mediocre. The challenge is to keep it raised up.”

“I think that one of the biggest challenges,” Martin concluded, “is making sure that the leadership doesn’t miss out on the opportunity for not only the physical renewal of the building but also the emotional renewal and the possibility of reflecting on where they are going as a community.”

In spite of the cultural challenges, parish politics or effects of polarization attach themselves to communities of faith in a given place and time, the constant need for attention to the liturgy itself and the community that participates in it remain the overwhelming concerns of liturgical architecture today.