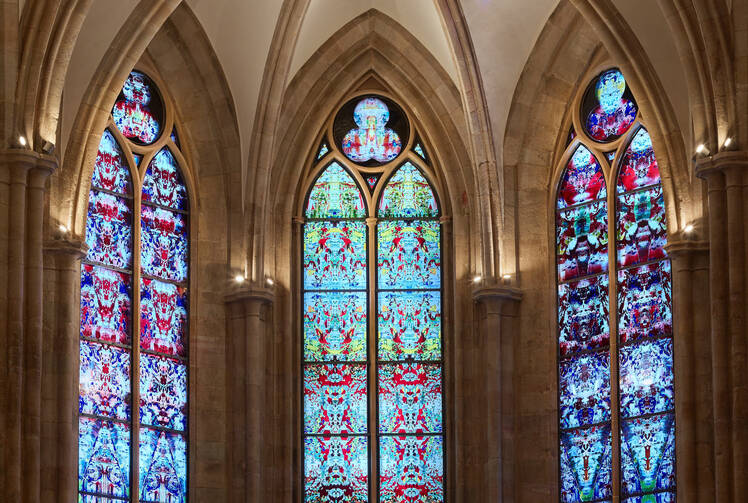 Three soaring windows took on light for the first time at the oldest abbey in Germany last October, where the sun every morning now blazes through at its rising and plays all day with the shapes and colors in its ever-changing variations. Long in disrepair but significantly renovated since 2008, the abbey in the small village of Tholey, with its 2,500 residents calling the south-west state of Saarland home, became instantly a destination of pilgrimage.

The first historical mention of Tholey Abbey comes from a document recorded in the year 634. By the end of the 15th century it had joined the Bursfelde Congregation, a union of German Benedictine monasteries, but in 1794 much of the abbey was burnt down amid the French revolution. In 1949, the Benedictines established the abbey one can visit today; monks from St. Matthias’ Abbey moved in from Trier the following year.

In 2008, Edmund and Ursula Meiser—Tholey locals and devoutly Catholic—offered their generous philanthropic support to begin renovations of the abbey and the construction of a baroque-style pavilion. Currently, 12 monks from five different nations, ranging in age from 24 to 75, live in the monastery, work in pastoral care and run the guesthouse and gift shop. (Where, yes, among other things you can buy abbey beer and gin.)

In 2018, Abbot Mauritius Choriol, O.S.B., and his confrère Brother Wendelinus Naumann, O.S.B., initiated a further transformation, one that would make the abbey into a center of hospitality. They announced a competition. The victor would create new windows for the north and south aisles of the church—windows to replace the stained glass there whose paint was wearing away, even flaking off. The winner was Mahbuba Maqsoodi, an Afghan-born artist who lives and works in Munich. 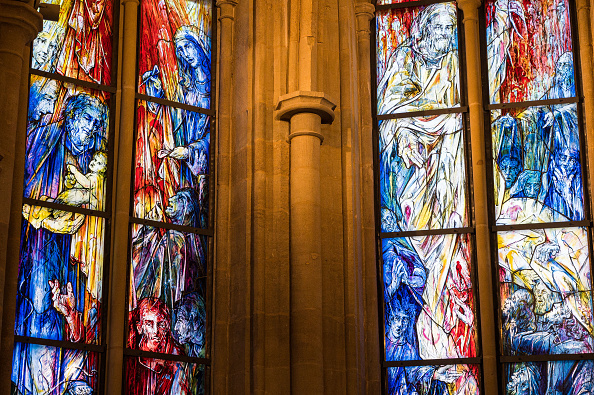 Inspired, as were the Meisers, by Marc Chagall’s windows in the nearby Metz Cathedral, the monks dreamed that a famous artist might create new choir windows for Tholey Abbey. They thought of the world-famous Gerhard Richter, who said he was too old for such a commission—but admitted that he would like to do it. And then he amazed the monks, who were well aware of the enormous prices Richter’s work fetched, by saying that he would do it, and without charge.

Born in Dresden in 1932, Richter defected to West Germany in 1961, studied and then taught at the Academy of Art in Düsseldorf and moved to Cologne in 1983. The Tholey Abbey windows are not the first commissions he has undertaken for a church. In 2003, the master builder of Cologne Cathedral at the time—Barbara Schock-Werner, a highly respected architect and art historian—commissioned a new window for the South Transept of Cologne Cathedral, a space nearly 65 feet high. The cathedral chapter was unsatisfied with early entries and Schock-Werner then turned to Richter. Though an avowed agnostic, the artist had his three children baptized in the cathedral; two of them have also sung in the choir.

To see in light is what the artist offers.

Hesitant at first, Richter writes that he “happened upon” his 1974 painting “4,096 Colours” and “saw that this was the only possibility.” He set about planning a window made of 11,500 small squares of glass, each 4” x 4,” largely ordered by chance with some personal interventions by the artist, and in 72 different colors. These he chose according to colors appearing in other windows of the cathedral.

Installed and celebrated with a Mass in 2007, the window was seen by some as a provocation. (Cologne’s Cardinal Joachim Meisner pronounced it “more suitable for a mosque or synagogue,” which Schock-Werner called “the best PR possible.”) But a wider public streams in to see it still, what I see as a 21st-century realization of Abbot Suger’s theology, the theology of God as light. (The architects of Reims Cathedral were impressed enough to ask Richter to create something for them too, but he declined the invitation.) 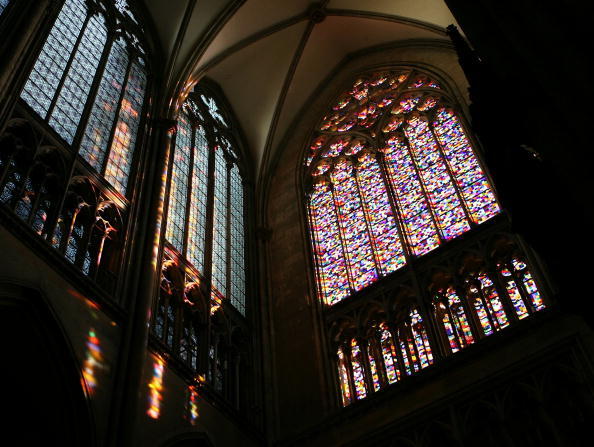 Other modernists have also done major stained-glass works for churches. Georges Rouault, himself adept with stained glass, encouraged Alfred Manessier’s six lyrical windows for the church of Sainte-Agathe des Bréseaux in 1948. In Germany after the war, Georg Meistermann created vigorous, linear abstract windows to decorate churches throughout the country. (His paintings had been labeled “degenerate art” by the Nazis.) What Henri Matisse began at age 77 and considered his masterpiece, the Chapelle du Rosaire in Vence—the fruit of four years of his incessant labor—houses glorious abstract windows.

It was a time for the ancient church to engage with the modern imagination. With Richter’s windows for Tholey Abbey we have a kind of apotheosis of this epoch of creativity. His three windows—with deep reds and blues prevailing on the outer two and the central one dominated by radiant gold—are more than 30 feet tall.

For inspiration, as with the Cologne Cathedral Window, he happened, while considering the commission, to be revisiting an earlier work. “Abstract Painting” from 1990 is a large scale, somber diptych (now in the Tate in London) of shimmering horizontal forms in white, gray and black, with some smudges of rusty orange and red. Years later, in 2009, Richter returned to that painting to create a quartet of similarly scaled, woven tapestries. These included “Yusuf,” striated red with a central mandorla-like form; “Musa,” a darker work with two heart-like forms at its center; and “Abdu,” the brightest, with golden bands bisecting the work horizontally and blue forms, again mandorla-like, at its center.

Gerhard Richter dazzles us with beauty that intimates what is beyond all human imagining. And then we are not far from “the image of the invisible God.”

Like these paintings, the Tholey windows are similarly mirrored and kaleidoscopic. Each comprises two lancets surmounted with a trefoil. Five different motifs vertically and horizontally are mirrored in a painstaking process that involved digital imaging and hand-layered panels of glass to recreate Richter’s original painting.

The windows inevitably suggest high-hung Persian carpets, except they are fashioned of light. They dazzle, soar, sing. As Abbot Choriol says, their radiant colors harmonize miraculously with the side-aisle figurative windows of Mahbuba Maqsoodi and her bold, expressionistic depiction of biblical scenes. Before the pandemic, the abbey had expected some 100,000 visitors a year to visit the church and its center for dialogue and education. 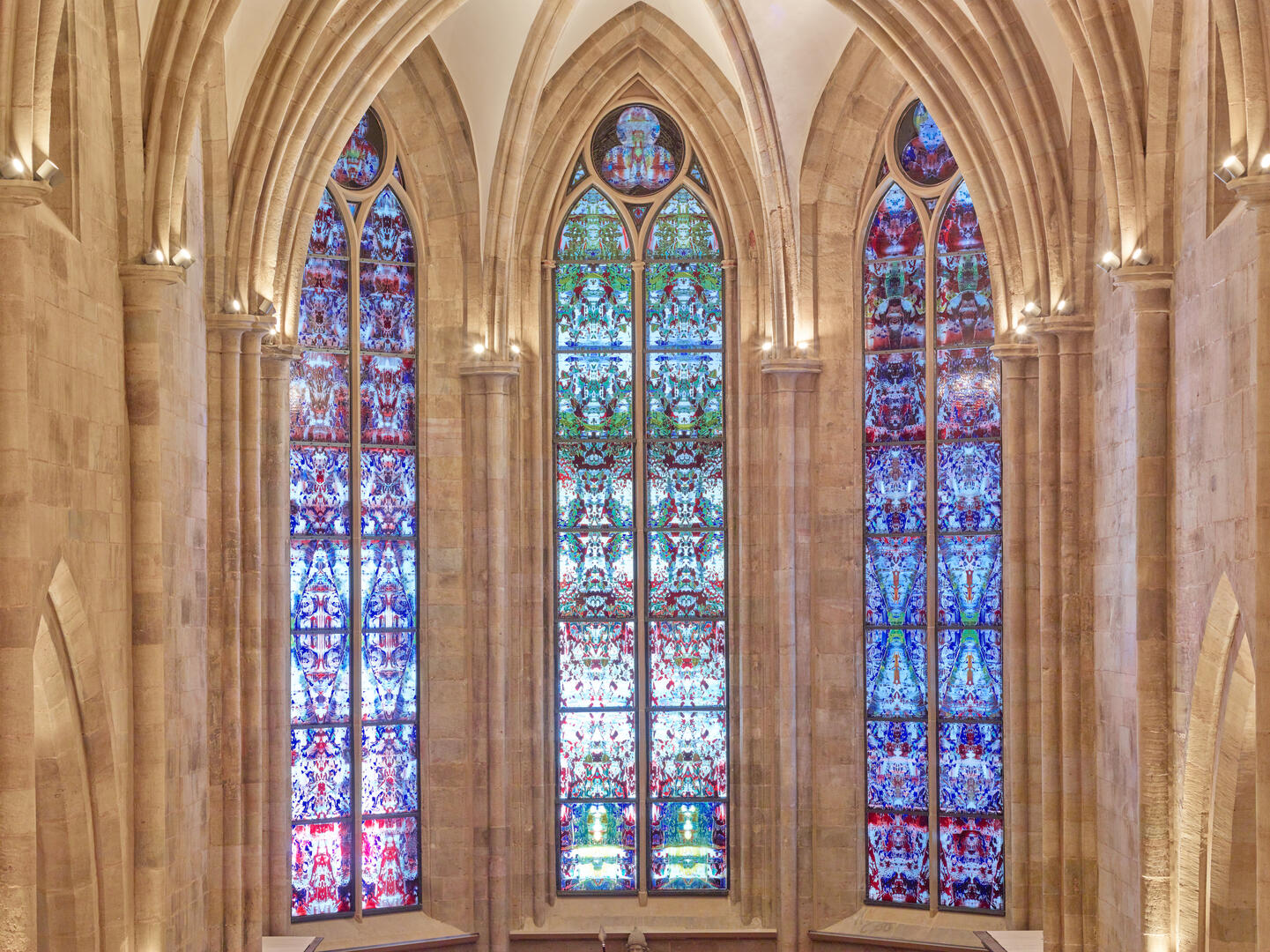 The three choir windows by Gerhard Richter at Tholey Abbey, unveiled in September, 2020. (Photo courtesy of the Meiser family and Abtei Tholey)

Richter, who is 89 and whose health did not allow him to attend the installation of his windows, says they will be his last “numbered” work. (He has dated everything he has made since his first painting done in the West, “Table,” in 1962.) But who knows? The man whom some critics like to call “a master of doubt” had not thought himself capable of the crowning achievement in Tholey.

“Helplessness is the great theme in painting,” he has said, “or rather the strongest motivation for and during painting.” But then again: “The central problem in my painting is light.” To see in light is what the artist offers.

Richter remains comfortable with the uncertain and with what he does not understand. Yet in a large book of interviews in 2011 he commented: “We can’t exist without some form of belief in things. We need it. It’s our culture, Christian history, that’s what framed me. Even as an Atheist, I believe.” I interpreted this to mean that he believes in the value of painting and beyond that, however aspirationally, in reality visualized, through representation or abstraction or preferably both. With immense gratitude to the artist, Abbot Choriol has said that he rejoices that the mystery of God is recognized and celebrated through the abstraction of the windows.

Richter remains agnostic, but his art “aspires” to even more than I realized. He has lived now in Cologne for over 37 years, the longest residence of his life, and describing the baptism of his children in the cathedral, he said in 2004: “My attitude toward the church had already radically changed, and I had slowly begun to realize what the church can offer, how much meaning it can convey, how much help, how much comfort and security.”

Abbot Suger’s theology, revived. Gerhard Richter dazzles us with beauty that will intimate for many what is indeed beyond all human imagining. And then we are in fact not far from “the image of the invisible God.” I can only expect, and pray, that our great artist’s journey—call it, yes, a pilgrimage—will continue.