Thank you, Alex Trebek. You were a gentleman and a scholar. 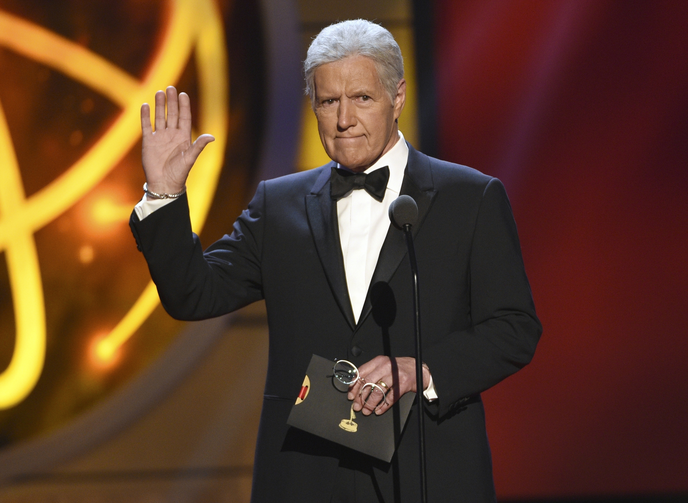 My maternal grandmother lived until the age of 101. A well-educated public-school teacher, Na-na retained her remarkable memory until three days before her death. During the 1990s I could telephone Na-na day or night, with one exception: from 7:00 p.m. to 7:30 p.m. “Johnny, I’m checking out when they take ‘Jeopardy’ off the air. It’s the last vestige of Western civilization. And how did you do with the questions on the Lake Poets last week?” Na-na’s room slowly turned into an Alex Trebek shrine as she posted on her wall beneath the crucifix the autographed photos of Trebek she regularly received from the game-show host.

Trebek guided us through what remains of an older, genteel culture that prized intellectual achievement.

The recent death of Alex Trebek (1940-2020) after a very public battle with pancreatic cancer has plunged millions of us into mourning. Trebek was not a politician, not an athlete, not a rock star, not a member of our pantheon of faux heroes. He was a gentleman who guided us through what remains of an older, genteel culture that prized intellectual achievement and cultural sophistication. His program was one of the last places that had not surrendered to the vulgarity of stand-up comedy or to the demolition-derby rhetoric of our political campaigns. The charity with which he treated flummoxed contestants who couldn’t seem to master the clicker or who slumped into a point deficit was a reminder of the shades of politeness we long ago abandoned.

Although Trebek was not a professional teacher, he reminded many of us of our favorite teacher, the one to whom we owe a special debt. “Jeopardy” had roots in the schoolday exercises that combined intellectual competition with fun: the spelling bee (I went down on the word “appurtenance” in eight grade); the science fair (full disclosure: when the bread molds in my high school science-fair project didn’t work out, I painted them with green and brown paint); and the model U.N. (as the imitation ambassador from Venezuela, I denounced the British occupation of Gibraltar as an outrageous violation of the Treaty of Utrecht). There was always that special teacher who without compensation went beyond the routine to organize the intellectual fun and ignite the love of learning within us. I was not surprised to learn that among his many philanthropic activities, Trebek hosted the National Geographic Bee for 25 years.

Trebek reminded many of us of our favorite teacher, the one to whom we owe a special debt.

Trebek maintained a special relationship with Jesuit education. The proud alumnus of a Jesuit school, he sent his children to Jesuit universities: Fordham and Loyola Marymount. When Fordham awarded him its Founder’s Award in January 2020, he said, “If there’s one thing I have discovered the past year, it is the power of prayer. I learned it from the Jesuits when I was a kid.” He generously funded a scholarship program so that residents of Harlem could attend Fordham. His life and work on “Jeopardy” embodied the liberal-arts humanism at the core of Jesuit pedagogy.

As critics have argued, the intellectual caliber of “Jeopardy” has receded over the years. There are fewer categories devoted to poetry, ancient history, philosophy, mathematics and biblical literature. Pop films, television series, comic books and celebrities take a larger share of the show’s questions. Less Herodotus, more Meghan Markle. But even in this attenuated intellectual atmosphere, Trebek still served as our nightly tour guide to Athens and Jerusalem. Even muffled, Plato and Isaiah still made their appearances. Our cicerone cordially hosted a space where Western civilization and Judaeo-Christian culture were not terms of opprobrium; they were sources of wisdom to be revered.

When the pandemic engulfed our nation, our Jesuit community here in Baltimore began to recite the rosary each evening at 7:30 PM. One member of the community suggested that the rosary should be moved earlier to 7:00 p.m., so that Jesuits living in the dorms could return to their rooms right after dinner. The brethren firmly reminded him that the thirty-minute strip of time from 7:00 p.m. to 7:30 p.m. was sacred. It was time for “Jeopardy.” We continued to begin the Apostles’ Creed, the first prayer of the rosary, at precisely 7:30 p.m.—after Final Jeopardy.

For your civility, your urbanity, your charity, your courage in fighting cancer, your love of education and your commitment to classical culture—a great thanks, Alex, from all of us. We are in your debt.