After the hail
is shoveled from the porch,
after vespers and the gourmand’s pasta maker,
the pier marching out across the tidewater,
the shrill melody of the grackle and
after the purple suitcase, after the fox

and the mountain, after the liar
forgets his keys, after the anorexic
buys a blue and yellow kite,
after the pickpocket falls in love
and the bailiff pays his ex,

after the wheel and the fire,
after the wave’s thousand shovels
and the oak’s wooden spear,
after pi to the millionth place and

the diamond too rare to cut,
after the word is forgotten and discovered,
and streamed until it’s nothing,
she is not here.
The river slops, wrinkles, flattens, 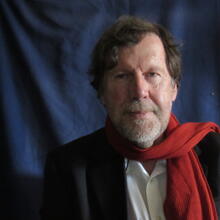 Michael Cadnum is the author of nearly 40 books, including the National Book Award finalist The Book of the Lion. His poetry collections include Kingdom and the forthcoming The Promised Rain.