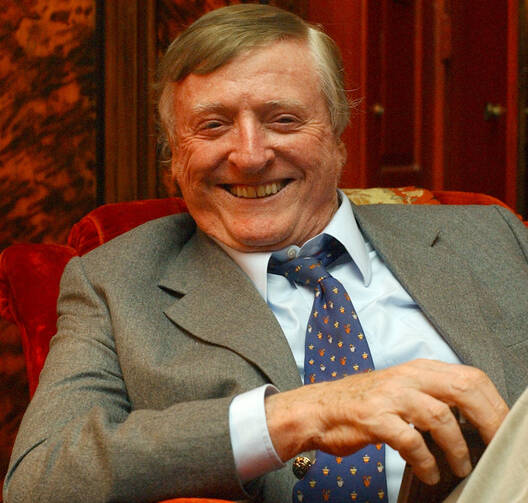 “I was very much introduced to the Catholic world through Buckley,” David Brooks says about William F. Buckley Jr., the founder of National Review and one of the leading intellectuals of the conservative movement in the United States beginning in the mid-1950s. He recalls being in National Review’s conference room for drinks after closing the first issue he had worked on, when 15 priests—friends of Buckley—walked in and joined them. Brooks thought to himself, “I’m in the Vatican here.”

“When I grew up in New York, I grew up with a lot of Catholics,” he says. “But that usually meant rooting for Notre Dame.” Being around Buckley, who was “just a straight-up believer” who integrated faith into his life, was a new experience for Brooks.

Brooks describes William F. Buckley Jr. as a pugilist at a time when religious leaders and issues of faith were more prevalent in the public square.

Brooks describes his former boss as a pugilist at a time when religious leaders and issues of faith were more prevalent in the public square. “He was not civil for most of his career,” he says. “If you go back to his early debates, they’re savage. And even with some of the communist stuff, he wasn’t great on Joe McCarthy a lot of the time. He wasn’t great on civil rights.”

Brooks clearly respects and is grateful to Buckley for the opportunity he gave him early on, but he struggles to reconcile the pugilist with a belief system that preaches gentleness and grace. “I really hadn’t thought about how you mix the pugilism that he could do with the belief and gentleness and grace and the Lamb of God,” he says. “I don’t have words to describe that combination. It was a time, of course, when there was just so much religious thinking in the public square—Fulton Sheen, [Abraham] Heschel and [Martin] Buber. People were more comfortable with you bringing faith into the public square than they would be today.”

It certainly was not the only contradiction he experienced. He recalls that one of Buckley’s biographers unearthed a story that Brooks was being considered for the editorship of National Review until Buckley nixed the idea because he was Jewish.

Brooks says he is “not sure it’s true, but it wouldn’t offend me if it was true.” When pressed on why it would not offend him, he says: “It should intellectually. But my affection for Buckley is so high, and he was so good to me, I can’t really hold it against him. And I wouldn’t want to do the job anyway.”

Stop calling me a crypto Nazi, you queer, or I’ll sock you in your goddamn face - William F. Buckley

See also his essay in National Review on why the South must prevail which argues against Mr. Luther King and overtly for white supremacy.

The fact that David Brooks worked for and still admires Buckley is revealing indeed.

Buckley engaged (albeit pugilistically) with leading lights of the left, and he had an admirable willingness to lose a debate to leftists if he still felt somehow that debate was worthwhile. (I am thinking of his debate with Chomsky about the Vietnam War, and his debate with James Baldwin at Oxford about racism in which he plays marvelously the role of arch-villain. ) But underneath it all there was a sportsmanship which is missing today. Firing Line presented marvelous moments (Buckley with Malcolm Muggeridge; Buckley with Borges). In spite of the fact that Buckley was too much aligned with Catholic fascism and racism (mysterious realities which I will not make excuses for) he was not a person to be erased.

"he had an admirable willingness to lose a debate to leftists if he still felt somehow that debate was worthwhile. (I am thinking of his debate with Chomsky about the Vietnam War, and his debate with James Baldwin at Oxford about racism"

To those with noting to lose, it can all be a grand game.

All the while, people were dying on both battlefields, those in Vietnam and those of poverty and racism in this country.

If find little reason to be amused at a clever argument that increased the death toll by even one.

I love David Brooks.... rush home on Fridays to hear him on PBS. Buckley---not so much-- although I believed him to be a 'valuable asset to the conversation!'' I am always ''prepared to agree with/ believe Brooks;''' Buckley not so much.

To my way of thinking, Mr. Kuss, God is genuinely mysterious reality. Catholic racism and fascism - not so much. It really isn’t hard to see in the case of Buckley obviously and Brooks also, though less obviously, where their racism comes from, how it is currently active in our world, and how it is going to end. Imperial wars of aggression against non-white people isn’t a particularly mysterious American reality, is it?
Not if you were “Born in the U.S.A.”
Mr. Brooks claims that “among the greatest privileges in life is to born an American.” Since he was born in Canada, he should know. A lot like America, just no imperial military force or white racist and fascist president. Kind of mysterious, right?

Buckley was not such a great Catholic. He was part of an era of Catholicism that was more compromise with evil.

Much of what he did and promoted contradicted the teachings of Jesus, but I suppose we can chalk much of that up to ignorance. It was a time when the Church compromised with racism.

I do recall reading his work in the local papers since I lived in Chicago, and that was very long ago. When a couple conservative columnists were writing for a weekly newspaper, short lived, here in Toledo I liked to read their columns as no one had made me feel so superior since I stopped seeing WF Buckley's columns.

I recall there were 4 of his commentaries that stand out as prominent indicators of his lack of ability to think deeply.

Somewhere along the line I came to the conclusion that WFB was an Idiot Savant. Much like the one not capable of participation in some mental activity, but possessing a talent for another, Buckley did not think deeply, but his talent was he wrote so very well it appeared he knew what he was talking about.