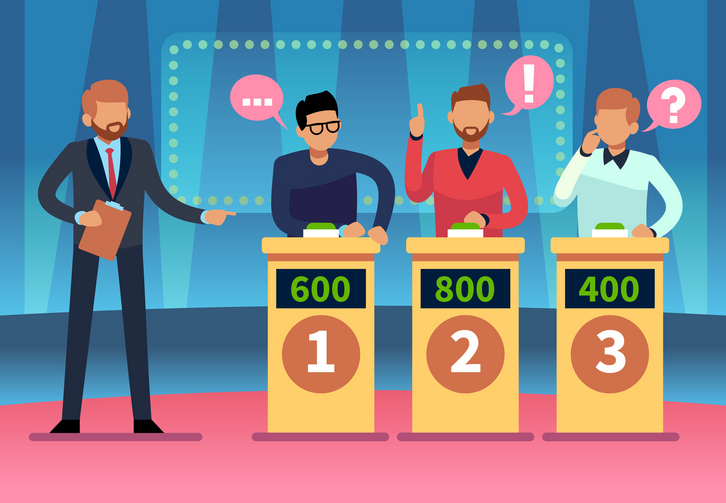 Did you frame your responses in the form of a question? Apparently, that’s important. Anyway, here are the answers, er, questions to “America Jeopardy” 2019. Thanks for playing, and enjoy the beach!

2. Who is William Tecumseh Sherman? The son of the famous Union general who led the March to the Sea during the Civil War was a Jesuit and lived at the America House Jesuit Community briefly in the winter and early spring of 1914. An ironic twist: Father Sherman is buried in Grand Coteau, La., next to a Jesuit who was the nephew of Alexander Stephens, vice president of the Confederate States of America.

3. Who is Dwight D. Eisenhower? Ike sent presidential greetings to America on its 50th anniversary in 1959. He had also coached the football team at St. Louis College, a Catholic preparatory school in San Antonio, Tex., to its first winning season in five years, in the fall of 1916.

4. Who is Mikhail Gorbachev? At a Cold War summit in Geneva, the leader of the Soviet Union surprised President Ronald Reagan by quoting from a column by Mary McGrory, who was America’s Washington correspondent. McGrory’s cousin, Brian, is the current editor in chief of The Boston Globe.

6. Who is Franklin D. Roosevelt? The Jesuit novitiate of St. Andrew-on-Hudson in Poughkeepsie, N.Y., was built on land purchased from the Roosevelt family. Legend has it that Eleanor Roosevelt would occasionally invite the novices for lunch.

7. Who is John F. Kennedy? The editors marked the assassination of the president by printing these poignant words from Shakespeare’s “Hamlet” on the cover: “The cease of majesty/ Dies not alone/ but, like a gulf, doth draw/ What’s near it with it.”

8. Who is Edward I. Koch? In 1989, the mayor of New York appointed Joseph A. O’Hare, S.J., who had served as the 10th editor in chief of America, as the first chairman of the New York City Campaign Finance Board.

9. Who is Ernest Hemingway? The author of The Sun Also Rises did not like Ezra Pound, the controversial writer and America contributor. He was not alone.

10. Who is Felipe VI? Leo J. O’Donovan, S.J., longtime contributor to America and emeritus president of Georgetown University, attended his wedding. The king is a Georgetown graduate.

11. Who is John Cheever? George W. Hunt, S.J., 11th editor in chief, wrote an entire book dedicated to the writings of the Chekhov of the Suburbs.

12. Who is John Podesta? Hacked emails from the Democratic National Committee in 2016 revealed that the chairman of the Hillary Clinton campaign and former White House chief of staff had been reading America.

13. Who is Eugene O’Neill? The Nobel Prize-winning playwright lived in a hotel near America’s first editorial office in New York City.

14. What is New York University? John E. Sexton, a longtime subscriber to America, once described the school near Washington Square as “the world’s first secular, Jesuit university.”

15. What is the 18th Amendment? The editors of America opposed prohibition, which they understood to be, in part, an anti-Catholic plot. Or so they said.

16. Who is John Foster Dulles? This U.S. secretary of state from 1953 to 1959 was the father of Cardinal Avery Dulles, S.J., who was a frequent contributor to America.

17. Who is Cardinal Richard Cushing? The third archbishop of Boston donated the funds that the editors used to purchase new headquarters for America in 1962. The current archbishop will tell you he is still paying the price for Cushing’s largesse.

18. What is General Electric? James Martin, S.J., editor at large of America, worked with Michael J. Cosgrove, a member of America’s board of directors, at the multinational conglomerate.

19. Who is Robert Mugabe? Boy, did we get that one wrong! In 1980, America’s editors praised Zimbabwe’s new prime minister, saying he was “the very essence of reassurance and conciliation.” Not even close.

20. Who is Robert F. Kennedy? In June 2018, I presided at the graveside service at Arlington National Cemetery marking the 50th anniversary of his death. It was the honor of a lifetime. Deo Gratias!