At a special screening, an infant weeps for St. Paul 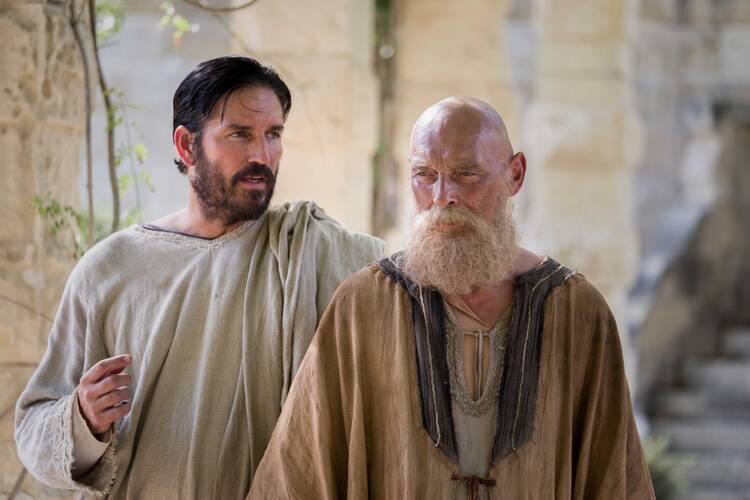 Jim Caviezel as Luke and James Faulkner as Paul are seen in the film "Paul, Apostle of Christ." (CNS photo/Sony Pictures)

Early on during a New York preview of the new movie “Paul, Apostle of Christ,” down near the front row of the theater, a baby started crying. It cried for about a minute during the opening scene—Luke stealing through torchlit passageways looking for Rome’s hidden Christians—and continued intermittently throughout the film. Whoever was responsible for the child did not get up and take it out. You could feel the entire audience’s disbelief. Someone brought their newborn to a movie, and that newborn wailed, and it was not carried out of the theater.

Someone brought their newborn to a movie, and that newborn wailed.

But what could be done? The screening took place at the Sheen Center, a Catholic arts ministry in downtown Manhattan. “Paul, Apostle of Christ” is not only about Paul wasting away in a Roman prison, but about a band of Christians standing up against pagans who cruelly abandon newborn orphans. What functionary at a Catholic arts facility showing a movie about Christians fighting for small children is going to stand up in front of everyone and tell a mother and child that they have to leave? 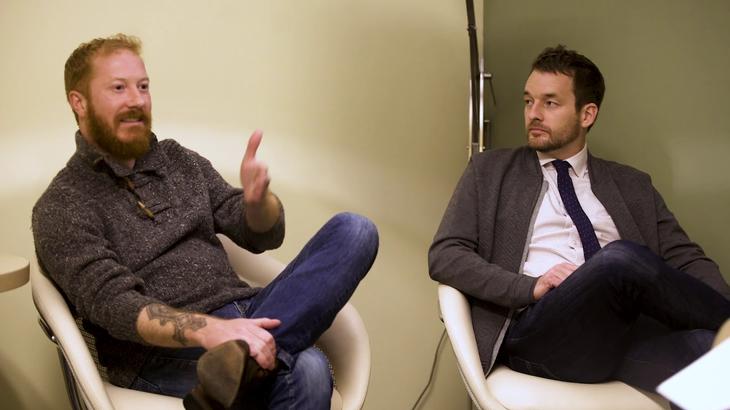 And to raise the stakes a bit more: three quarters of the way through the movie, when the baby started crying again, a nun picked up the child, took it to a side aisle and rocked it in her arms. A religious sister in a white and blue habit tenderly (and a little aggressively) rocking an infant, while directly overhead the apostle Paul tells us that love is patient, love is kind. What house manager is going to behold this scene and say, “Enough. Out.” It is not going to happen.

And to ratchet all this up even further: the building housing the Sheen Center sits flush next to, of all things, Planned Parenthood. One of the services of Planned Parenthood takes place about a 35-second walk from what happens inside the Sheen Center. Who in the Pauline world wants the spectacle of a mother, trying to see a movie about patient loving oppressed Christians, forced to exit a Christian theater because her baby was inconvenient and with terrible irony must walk past Planned Parenthood in doing so.

So, we all put up with the kid. The movie played on. The baby didn’t cry for the last 20 minutes. Paul was beheaded. The rest of the Roman Christians soldiered on.

So, we all put up with the kid. The movie played on.

The screening of “Paul” was held largely for Catholic and Christian “faith leaders,” as the movie’s publicity team put it. Produced by a division of Sony called “Affirm,” the company’s public relations strategy was to sponsor screenings at churches around the country—mostly Protestant and evangelical—prior to its opening on March 23. Everyone who came to the screening received a “swag bag” of movie posters and postcards, a “Paul, Apostle of Christ” pen and a leather bracelet branded with the words, “Love is the only way. paulmovie.com.” Before the Sheen preview, Affirm had already done 60 of these kinds of events. (Affirm’s 2015 feature “War Room,” which underwent a similar rollout, was a sleeper hit, yielding a box office total of $67 million.)

Before the movie, my colleague José Dueño and I filmed interviews with the actor James Faulkner (Paul) and with the movie’s producer, T.J. Berden, and director, Andrew Hyatt. Prior to the shoot we realized that we did not bring with us the proper lighting gear to create the kind of uber-professional video we at America aspire to. So we just shot the video under a large, round and fairly severe hanging lamp, which sat about 7 inches over the interviewees’ heads. We were concerned that the quality of lighting would make it look too “flat,” amateurish. People would stop taking America seriously. We would lose subscribers. These professional Hollywood Christian movie people would laugh at us.

Thinking about joining the Jesuits? Stop sitting on the fence and try it out.
Joe Hoover, S.J.

Or maybe it would come off as “spare,” or “austere,” matching the mood of the film we were covering. Watch the video. You be the judge.

The interviews center largely on Faulkner and the filmmakers’ encounters with, what else, faith, hope and love during the course of filming “Paul.” During our conversation in the flat light, these men came off as eager, humbled and spiritually grounded. Possibly grounded enough that they might find a baby wailing during their grave and tragic film to be not enraging, but sort of fitting.

The movie is playing now in suburban DC and I went after Mass today. There may have been 25 people so I have my doubts about how long it will run. I found it engrossing, artistic, emotional, and an inspiration to go back and read Acts again. I hope people will seek it out. It would be a good movie to show to church gatherings, particularly Bible study groups.

I was with you until the Planned Parenthood remark. I am an infertile woman who finally was blessed with a child through adoption. You KNOW Planned Parenthood does much, much more than abortions. Be charitable. And stay on point.

don't listen to hostile critics who dislike religion
Best Christian movie of past 10 years. Those critics who bothered, or who were given an opportunity to review the latest faith-based movie Paul, Apostle of Christ, dumped all over it at a 75 percent rate; the audience score, however, is a healthy 93 percent approval, according to Rotten Tomatoes. I'm a biblical scholar of 40 years. This movie is 100% accurate. If you like the bible, you'll like the movie. and vice versa

The same could be said for babies in Church. Fitting, don't you think? Why is it, really, that we get upset with parents who are simply trying to do the right thing? Nice context for the article on the movie. I think Paul and Luke would understand.