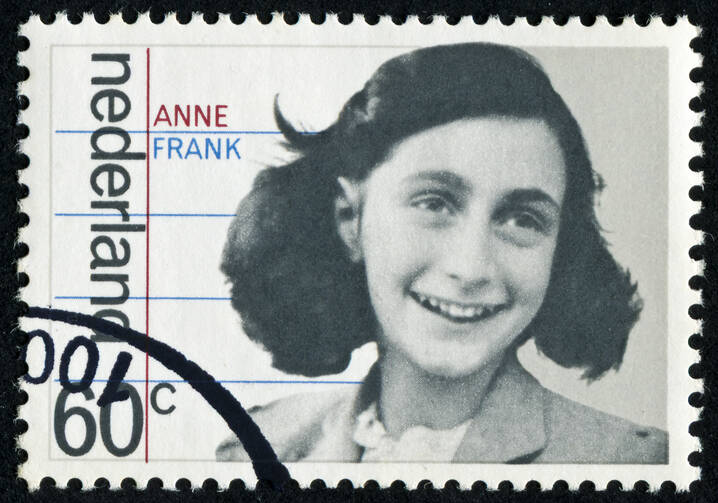 Editor’s Note: The following essay is drawn from remarks given by Leo J. O’Donovan, S.J., at the Library of Congress upon the occasion of Jesuit Refugee Service/USA receiving the Anne Frank Award from the Embassy of the Kingdom of the Netherlands on September 14, 2017. The award is given to an American person or organization who has demonstrated a body of work which confronts intolerance, anti-Semitism, racism or discrimination, while upholding freedom and equal rights.

Jesuit Refugee Service/USA was honored for its work improving access to education for refugees and others affected by war and conflict. The award was introduced by former Secretary of State Madeleine Albright and Senator Patrick Leahy (D-VT) and accepted on behalf of JRS/USA by Father O'Donovan, its director of mission.

On June 14, 1942, 75 years ago this year, Anne Frank wrote her first entry in “a cardboard covered notebook,” describing her 13th birthday two days before and her many gifts, “possibly the nicest of all” being the notebook itself in which she began the diary addressed to her imaginary friend Kitty. Five years later, with the cataclysms of World War II and the Holocaust having been brought to a bloody close, the young girl’s journal was introduced to the world.

Based on papers left in an attic after the German “Green Police” arrested a group of hidden Jews in Amsterdam on August 4, 1944, and that were later given to Otto Frank, the family’s only survivor, a compiled edition of the diary was produced. A family friend, Dr. Kurt Baschwitz, wrote of it on February 10, 1946:

It is the most moving document about that time I know, and a literary masterpiece as well. It reveals the inner experiences of a maturing girl, her impressions in close confinement with her father, whom she loved dearly; her mother, with whom she clashed; her sister, whom she discovered to be a friend; with the other family that shared their hiding place; and with their son, with whom she began to fall in love.

On the day of the girl’s first entry, the Frank family (refugees from Frankfurt, Germany) was still living in a comfortable apartment in southern Amsterdam. But on July 9, Otto Frank took his family—his wife Edith, with Anne and her older sister Margot—into hiding in the back half of a building at 263 Prinsengracht, where he had his office. Joining them a month later were the Van Daan family, including their son Peter, and then in November a dentist named Albert Dussell. (Anne discreetly changed the names of the actual persons.) They were to remain for two years and three months behind a bookcase that hid a door leading to a steep staircase up to two floors on the back side of the building, to what Anne called Het Achterhuis—”the house behind,” or “Secret Annexe.”

At the heart of Anne Frank’s life and witness is a hopeful faith in humanity.

Anne’s voice is astonishingly secure almost from the first page—and likewise consistent. At 13, Anne confides to Kitty that Kitty alone will hear who her correspondent is, someone whom no one else, not even her beloved father, seems really to understand. In her last entry, on August 1, 1944, she writes of her “dual personality,” with its “lighter, superficial side” and its “deeper, purer side.” We gradually come to know a girl of extraordinary observational ability: witty (life in hiding is “like being on vacation in a very peculiar boarding house”); curious (the radio is a “source of courage,” bringing news from the British landing in North Africa to the Allied invasion of Normandy); courageous (she is her “own skipper” and must “keep her head high and be brave”); admittedly harsh at times (Mummy does not understand her at all, Mrs. Van Daan is “unspeakably disagreeable”); with an increasingly strong sense of a call to be a writer (“I want to go on living even after my death”); and, oh yes, candid (perhaps most famously about her sexual maturation, but also about her dawning infatuation with Peter, to whom she explains “everything about girls”).

Her eloquent love of nature and its beauty frequently lifts her spirits. Her sense of God is strong (she says her night prayers regularly with her father) and, if not directly, nevertheless implicitly related to her frequent statements of compassion for her “fellow creatures,” not least of course for fellow Jews. On January 13, 1943, she writes: “There is nothing we can do but wait as calmly as we can till the misery comes to an end. Jews and Christians wait, the whole earth waits; and there are many who wait for death.”

"The good news is that you don’t know how great you can be! How much you can love! What you can accomplish! And what your potential is!”

At the heart of Anne Frank’s life and witness is a hopeful faith in humanity: “It’s really a wonder that I haven’t dropped all my ideals, because they seem so absurd and impossible to carry out,” she writes on July 15, 1944. “Yet I keep them, because in spite of everything, I still believe that people are really good at heart.” Yet another variant on this central theme is her challenge to anyone seeking hope: “Everyone has inside of him a piece of good news. The good news is that you don’t know how great you can be! How much you can love! What you can accomplish! And what your potential is!”

This, I think, is Anne Frank’s message, as a refugee, to the refugees of the world today—“our refugees.” Her ability to see the dignity of every person extended to the potential of their humanity. “What you can accomplish!” she says. It is the hope for a future through education that I have personally heard refugees express again and again.

It is for those refugees, “our refugees,” and with the girl from 263 Prinsengracht as our patron, that we at J.R.S. humbly accept this award.

We are pleased to announce we are launching an essay competition in collaboration with the Embassy of the Netherlands, the Jesuit Schools Network, and America Media.

In gratitude for this award and the honor you do JRS/USA, our executive director, Ambassador David Robinson, and all our staff, we are pleased to announce we are launching an essay competition in collaboration with the Embassy of the Netherlands, the Jesuit Schools Network, and America Media. The theme will be “lessons from Anne,” and we hope the contest will deepen the knowledge of its namesake, raise awareness about the refugee crisis today, and encourage Jesuit-educated students to respond in practical, hopeful ways. The first-prize-winning essay will be published in America, the flagship magazine of America Media and the leading Catholic journal of opinion in the United States.

With deep gratitude to the Netherlands and in particular to Ambassador Henne Schuwer, I close by recalling a telling comment on Anne Frank and her diary written a year before the first publication of “Het Achterhuis” by the highly regarded Dutch historian Dr. Jan Romein in a leading Dutch journal:

How she died, I do not wish to ask…. What matters far more is that her young life was willfully cut short by a system whose witless barbarity we swore never to forget or to forgive while it still raged, but which, now that it belongs to the past, we are already busily, if not forgiving, then forgetting, which ultimately comes to the same thing. To me, however, this apparently inconsequential diary by a child, this “de profundis” stammered out in a child’s voice, embodies all the hideousness of fascism, more so than all the evidence at Nuremberg put together. To me the fate of this Jewish girl epitomizes the worst crime perpetrated by everlastingly abominable minds. For the worst crime is not the destruction of life and culture as such—these could also fall victim to a culture-creating revolution—but the throttling of the sources of culture, the destruction of life and talent for the sake of mindless destructiveness.

The only solution, wrote Dr. Romein, is to build a society in which talent is discovered, nurtured and assisted. Yet “with all our good intentions,” he lamented, “we are still as far from that democracy as we were before the war.” Shall we not, dear friends, today recommit ourselves to such a task, for all our fellow human beings, without exception, upon whom God looks with loving providence?

Note: For instructions on how to apply for the “Lessons from Anne” Essay Competition, click here.