The Walking Dead’s religious question: Can paranoia and Christianity coexist? 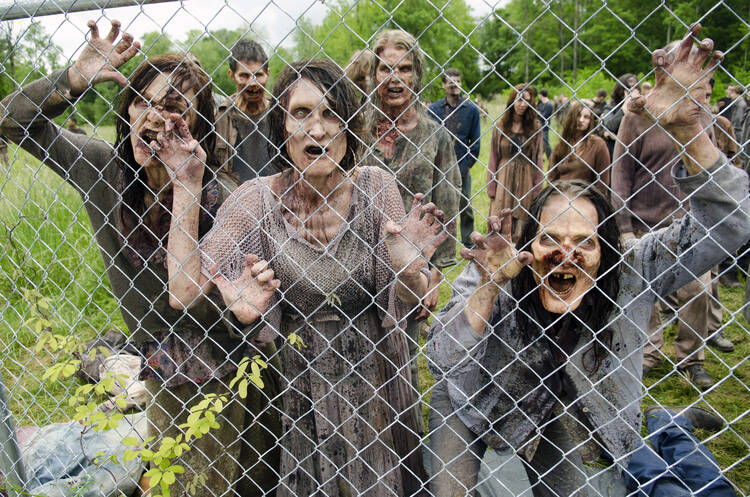 “But if you go on biting and devouring one another, beware that you are not consumed by one another.” (Gal 5:14-15)

“Christ promised the resurrection of the dead. I just thought he had something a little different in mind.” —“The Walking Dead”

A few years ago, the AMC cable channel ran a daylong marathon of its hit zombie series “The Walking Dead” on Easter Sunday to lead up to that evening’s season finale. What better—or more cleverly ironic—way to celebrate the Resurrection than with the undead? Hooked by the first episode, I binge-watched to catch up on two seasons. While I did not lose sleep over the show, I did catch myself surveying the sidewalk in the predawn dark before I stepped out to pick up the newspaper.

The survivors in zombie stories have every right to be paranoid. The zombies are out to get them, and in “The Walking Dead,” so are the living. It is a world in which, besides avoiding the undead, people must also contend with humans who, to survive, have sunk below civilized behavior (this kind of living-vs-living conflict has consumed recent episodes of “The Walking Dead.”). Every day, the survivors must face unknowns with some kind of hope.

But the source of such hope is unlikely to be religious faith. This seems to be a fundamentally post-religious world, and as the Easter marathon might suggest, the series does not seem to take religion very seriously. In a memorable depiction of religion, the show’s protagonists, searching for a missing child, come upon a rural church where they find a handful of zombies sitting in the pews—in their usual seats, one assumes—staring at the empty altar. After dispensing with these dead, a few characters pause in the church to say prayers that, to say the least, are not answered the way they hope.

Religion is not absent in “The Walking Dead,” but it is hardly presented as a recourse for people in extreme crisis. With few notable exceptions, characters with faith have been weak and ineffective. As one character tells another early in the series, perhaps laying out the show’s theology, “Feel free to believe in God, but the thing is, you gotta make it okay somehow. No matter what happens.” The implication being that, God or no God, you are on your own.

In a zombie world, the good Samaritan would be toast.

Whatever its estimation of religion, the series, intentionally or not, provokes at least one profound religious question: Can paranoia and religion—Christianity, specifically—co-exist? In this series, it seems, where faith carries little weight, the answer is no. In the extreme paranoia in which no undead (and few living) can be trusted, Christianity proves an ineffectual weapon—a point that recurs regularly. Who is your neighbor? In a zombie world, the good Samaritan would be toast.

Paranoia is vital in the series’ post-apocalyptic world, where survival does not allow for the niceties of “turn the other cheek” or the meek inheriting the earth. In“Night of the Living Dead,” too, the 1968 classic to which all zombie shows owe something, the living battle among themselves almost as much as with the dead. After all but one of a group trapped in a farmhouse are killed by zombies, that final survivor is killed by living people who do not bother to check whether he is living or undead. No wonder there is a “suspect everyone” mentality to zombie stories. This inevitable paranoia paves the way for inherent symbolism in these tales. Zombies seem to signify the fragility of the social compact and the kind of chaos that awaits the breakdown of society, a calamity sometimes threatened by the other—that which we fear, hate or do not understand. The catch-all other, zombies may embody all kinds of fears, such as nuclear war and racial unrest (both of which are part of “Night”) or a shopping cart of “isms” and suspect groups.

Zombie stories often involve the rapid rise of a (usually) inexplicable plague that creates the undead. It is unexplained in “The Walking Dead” too. It might be evolutionary: Early in the series, a scientist explains, “We’re all infected.” He means the zombie virus, but it sounds like Original Sin. Survivors in these stories are typically left to wonder how it could have happened and why it was not stopped, a fearful awe that resembles responses to the rise of Nazism or Communism, or more prosaically, the spread of left- or right-wing ideologies within a democracy, or maybe more specifically, the increase of numerous tolerances or intolerances, all of which can seem just as threatening and out of control as zombies.

Maybe this is just too much how-many-zombies-can-dance-on-the-head-of-a-pin theorizing. What world that produces zombies could have a god? But in the real world, the Christianity-paranoia relationship seems disturbingly equivocal. On this side of the TV screen, survivalists are already preparing for the fall of civilization. Among the less extremely paranoid, eccentric fears play out in many ways, in rhetoric, legislation and sometimes outbreaks of violence—building walls, figuratively or literally. For those looking, contemporary America seems to offer an ever-expanding list of occasions of social or political paranoia: police brutality, health care, L.G.B.T. issues, religious extremism, gun violence, terrorism. The paranoid do not see conflicting opinions; they see an evil other victimizing them. They accept conspiracy theories based on the most unusual and slim evidence. By its nature, paranoia abhors Christian charity, yet many Christians seem to be infected with it in confronting the other in their midst. The polarities often proclaim Christianity to justify both their aims and their disgust with their opponents.

“Night of the Living Dead”came out in the midst of protests, war and reaction, a time of civil disruption in America maybe second only to the Civil War. That atmosphere seeps ominously into the movie’s conclusion. In the film’s final scene, the survivor of the main action is killed—a black man shot by a posse of white men. Resembling scenes of besieged cities across the country and across the ocean in 1968, the film closes with still images of the would-be lynch mob carrying the dead man to a pyre of zombies. The pictures could have come from newspaper coverage of war and race protests. In “The Walking Dead,” the living-on-living violence is more chilling than the often slapstick violence inflicted on the undead. Is it surprising that the series is popular at a time of polarization that seems to approach that of the 1960s—a time when the country appears on the verge of being torn at the same seams that were breaking when “Night” came out?

My Inner Zombie: Living with ‘The Walking Dead’
Jim McDermott

I do not watch The Walking Dead for spiritual enlightenment (although I am aware of a cottage industry in its theology), but I may be unable to avoid it. Prophetic or not, the show is a parable in which fear and hatred are all-consuming, and paranoia serves the survivors. Like all parables, it is a looking glass—a particularly chilling one—for the “real world,” where, for followers of Jesus Christ, the second greatest commandment, “Love your neighbor as yourself” (Mt 22), is not supposed to be optional. It may be impossible to love as Jesus did—and most certainly if one is plagued by paranoia—but it is a hopeful ideal. This kind of hope would likely fail people contending with the undead, but for us, it should be an antidote for the paranoias that divide our world. It may require the courage of those survivors.

I may not, as St. Peter admonishes, use “The Walking Dead” as my “explanation to anyone who asks you for a reason for your hope,” but I will continue to watch. Zombies lurking around my morning paper do not worry me as much as the Tea Party flag down the block. Nevertheless, until the fall of civilization, I will try to continue to try to cling to love your neighbor and hope that in the end it doesn’t come back to bite me. 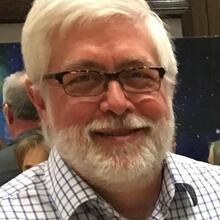 Patrick Gallagher lives in Aberdeen, South Dakota, where he works for a community development nonprofit.

You're going to "try to love your neighbor" even though you're really "worried about the Tea Party flag down the block". Hmm... Don't they count as your neighbors, too? You might be pleasantly surprised if you got to know them.
Looks like somebody spends too much time watching zombies and not enough time watching EWTN! I tell my children that they should spend their time thinking about what God WANTS them to think about. It's good advice for us "old" people, too.

Nothing more physically impossible than a zombie. The energy budget just doesn't work. What they really need to model is a world in the worst case global warming scenario. The human race would probably survive in much smaller numbers and those remaining would have lives nasty, brutish and short. Of course, total extinction is possible if the chaos of collapsing civilization triggers a nuclear war. Then it'll be, Christ promised peace on earth but I didn't think this was what He had in mind.