Is it easier to see your own sin in outer space? 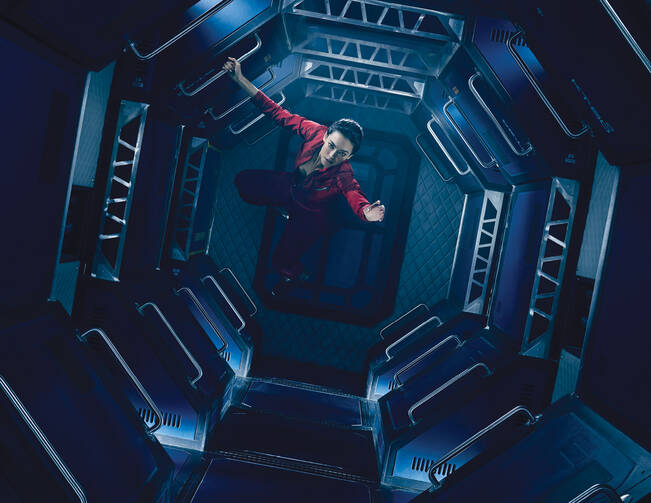 Gravity is a hard fact, whether it comes from a planet or from an engine. The Expanse, a SyFy drama beginning its second season this February, faces up to the physics of space travel, rather than follow Star Wars or Star Trek and wash its hands of the narrative problems it creates. The complexity of human society—politics and tribalism especially—is also a hard fact, and “The Expanse” deals with this rigorously as well. Set in the 24th century, it worries not only about the details of orbital mechanics, but also about how colonizing the solar system is likely to be at least as messy and complicated as the colonization of continents here on earth.

Science fiction tends toward a niche audience, so if you haven’t seen “The Expanse” yet, you can be forgiven. But you can probably guess your penance. While it lacks the budget of HBO’s fantasy juggernaut “Game of Thrones,” once it gets moving, “The Expanse” proves that it deserves a wide viewership. Based on a series of novels by James S. A. Corey (a pseudonym for the collaboration of Daniel Abraham and Ty Franck), the TV storyline is mostly faithful to the books. The core characters are true to their literary counterparts even if some of the particulars change.

Science geeks will enjoy the detail paid to laws of physics and how they are employed in building new worlds. The show’s creative team goes to great lengths to accurately portray life in space. The visual attention to real physics constantly reminds us how precarious humanity is outside our little bubbles. There is no magic gravity here, no force fields. When people bleed, the blood beads up and floats. When the pilot fires the engines to steer the ship toward safety all those mesmerizing red blobs rush in whatever direction is now “down” and splatter in a sickening shower. Even bar scenes don’t skimp on the physics. As if life wasn’t hard enough mining an asteroid, happy hour now includes accounting for the coriolis effects of spin gravity as you attempt to pour your drink.

This attention to detail helps us relate to the characters and their perilous place in this unforgiving world. While it is squarely in the science fiction genre, “The Expanse” crosses over into drama and crime procedural as well. Even noir fiction finds a place in space with Detective Miller, one of the first season’s most complicated and engrossing characters. Fantasy and science fiction have always used imaginary worlds to explore what it means to be human beings in this more ordinary realm. In a time of posturing and chest thumping by world leaders, when tribalism and distrust are rampant in national politics, “The Expanse” taps into our anxieties and concerns more than ever. We really don’t know which way is up.

Belters, natives of the Asteroid Belt, spend their entire lives in mining communities. They have developed their own language, complete with a robust system of gestures adapted to long hours in space suits. Planet-based governments don’t need waterboarding to interrogate separatist Belters; they when simply bring them “down the gravity well” where consistent G-forces are excruciatingly painful. It is no surprise that the Belters are deeply distrustful of the elites from Earth and Mars. The Belters work in harsh conditions and risk their lives to send raw materials back to the “inner planets.” They have shouldered the risks but haven’t reaped the rewards of humanity’s increasing expansion. Sound familiar?

The complex lives of the characters draw us into their stories. And they are stories we know, stories we tell ourselves and stories we are not proud of. Why is it easier to explore the gritty reality of racism, sexism or elitism when it’s set in another world? Are we afraid to face the hard fact of our own sinfulness? Perhaps the better question is how we can take advantage of the new openings for dialogue and conversion, whether it starts with Westeros or the Asteroid Belt. There really is nothing new under the sun—or above it, or spinning 500 million miles away from it.