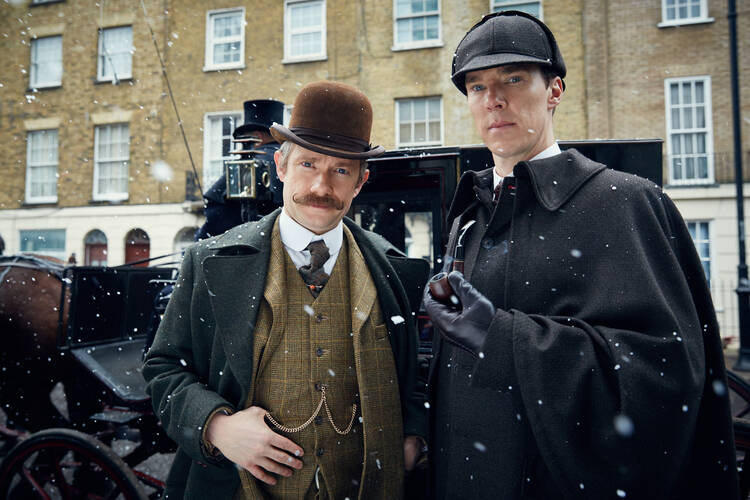 Martin Freedman and Benedict Cumberbatch in "Sherlock" (photo courtesy of © Robert Viglasky/Hartswood Films and BBC Wales for BBC One and MASTERPIECE).

On New Year’s Day, Sherlockbegan its much anticipated fourth season after a three-year hiatus. (A one-off special episode aired a year ago to ensure that its rabid fans would not lose any of their rabidity in the meantime.) The show, a joint production of the BBC and PBS, airing both in the United States and the United Kingdom, has become a global phenomenon. It has found an especially devoted audience among that most sought after of demographic groups—millennials—as evidenced in the seemingly endless Tumblr and other social media accounts devoted to it.

Indeed, the amount of reverence given to the show by its online disciples is simultaneously astonishing and head scratching. What is it about this particular procedural drama floating along in a veritable Pacific of procedural dramas that elicits such admiration and, at times, troubling obsessiveness? Why “Sherlock” and not, for instance, CBS’s own Holmesian derived detective series, “Elementary”? Granted, the show is a well-constructed piece of work, in the neat-as-a-pin style efficiency that has become the hallmark of British television. There is a lack of excess and pathos in U.K. television that allows for a concise and fast-paced storytelling, which in turn lends itself particularly well to the procedural genre.

Like all genres, the procedural relies heavily on its form. Indeed, there is more than a bit of irony in the fact that one of the most appealing traits of a genre whose primary thrust is to solve a mystery is its lack of mystery. A procedural is completely and utterly familiar. There seems to be something fundamentally comforting in finding out “whodunit” when we know everything else. As such, the issue for those charged with creating procedural dramas is not one of content but rather how that content will be expressed.

The American procedural emphasizes the psychological. It focuses on the particularities of the characters both criminal and detective, and allows the show to be driven by their various pathologies and idiosyncrasies. Narrative can become secondary. This is seen in a show like “Elementary,” where the already canonically idiosyncratic Sherlock Holmes is given the further existential burden of being a recovering addict, with Watson as his sobriety coach. This sort of psychological layering is rampant in American procedural shows, wherein every character has their particular quirk or tick that defines them. The shows become bogged down in psychologizing at the most superficial level, which speaks of nothing more than lazy writing and an inability to work within the form of the formula, as it were.

Where British procedurals differ from their American counterparts—of which “Sherlock” is a shining example—is in allowing the narrative to thrive within the constructs of the form, through the interactions of its characters. Sherlock Holmes was an icon long before Benedict Cumberbatch put on the deerstalker. Neither he nor the creators of the show, Mark Gatiss and Steven Moffit, attempt to lay anything on the character or the narrative itself that is in any way inauthentic. “Sherlock,” like “Elementary,” is updated to the contemporary, yet the essence of Conan Doyle’s work is never lost.

But what makes “Sherlock”stand out are its two leads—Cumberbatch as Holmes and Martin Freeman as Dr. Watson—and their relationship to one another. And it is in this relationship where things get a little, dare, I say, Christian? Holmes as played by Cumberbatch is a Christ figure par excellence. If ever you were looking for a contemporary image of the logos it can be found in the shark-like gaze of Cumberbatch’s Holmes. He is a Christ figure: morally, intellectually, existentially superior to all those around him, the smartest guy in the room who happens to be the smartest guy in any room.

His story plays out in a manner not dissimilar to the Jesus narratives in the Gospels: He does his work and grows in fame and notoriety through the proclamation of his followers (in this case Dr. Watson’s blog). He even has his own Magdalene (or at least the popular image of Magdalene) in the form of Irene Adler (Lara Pulver), a dominatrix with political connections in the episode “A Scandal in Belgravia” (an adaptation of the original Doyle story, “A Scandal in Bohemia”). Holmes is attacked both from within his circle, as well as from without, by that enemy of humanity incarnated in Jim Moriarty (played with snide aplomb by Andrew Scott).

But it is in Sherlock’s relationship with his disciples—Freeman’s Watson, Rupert Graves’s Inspector Lestrade and Louise Breasley’s Molly—where we see Sherlock most clearly as god-man. Sherlock is self-sufficient, seemingly without needs, and yet he does need, and this need is most evidenced in his relationship with Watson.

Holmes sees in Watson’s humanity the beauty that comes with human frailty. He is drawn toward this imperfect person. With his short stature and everyman look, Freeman’s military veteran Watson is very much of the earth and of this world: He is all second-guesses, missed chances and open wounds while providing the perfect complement to Holmes’s word made flesh. Watson is like Peter, the rock who crumbled. He guilelessly pledged his allegiance and then denied the one he believed in most, for no other reason than he was human and that is the sort of things that complicated creatures like humans do.

By contrast, Holmes is simple in the Thomistic sense of the word. He is a perfectly rational being, autonomous, unfettered by error and excess emotion. With that simplicity comes a power and status that does not necessitate a lot of energy wasted. Cumberbatch is a gifted actor and recognizes that for Sherlock everything begins and ends with the eyes; there is no excess in the facial expressions. The masks of the smile, the frown, the furrowed brow are off-limits for the alpha of all alpha males. Everything comes from the gaze, a gaze that is simultaneously shark-like in its impenetrability and fawn-like in its innocence. It is not difficult to imagine the Jesus of Scripture looking lovingly at his disciples or ominously at the Pharisees with this Sherlock’s gaze.

It is in this relationship, this Holmes/Watson, this Jesus/Peter relationship, that “Sherlock”moves from goodness to greatness. It is in the supreme gifts of both Cumberbatch and Freeman as actors that they are able to move a good, if not ground-breaking, British procedural drama into a global phenomenon.

Show Comments (
3
)
Comments are automatically closed two weeks after an article's initial publication. See our comments policy for more.
Barbara DeCoursey Roy
5 years 6 months ago
This is not a show about Jesus! What are you smoking?
Richard Booth
5 years 6 months ago
Holmes is a fictional, underdeveloped partial-person. He is an intellect without other recognizable and respectable human traits, like generosity, humility, or the ability to create and maintain meaningful relationships. Perhaps, if one were to combine Holmes and Watson, we might be able to hypothesize that we almost have one relatively complete person. Viewers like Holmes, I suppose, because he is a secretive super-sleuth who seems to know more than they do (and he probably does!). Is this sufficient for a "Christ figure?"
Jim MacGregor
5 years 6 months ago
Whatever it is, it seems to stimulate much of the vapid discussion we hear on TV and see on many political and supposedly "news" blogs.