The Cubs are finally champions. Now what do I do? 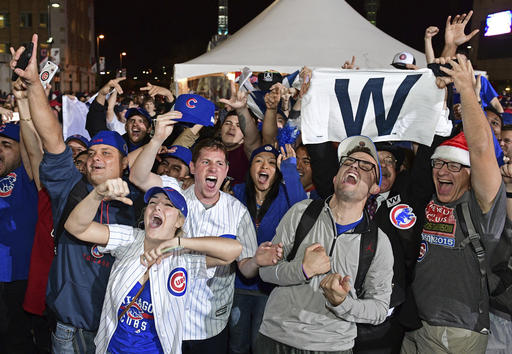 Chicago Cubs fans celebrate during a watch party, after Game 7 of the baseball World Series between the Cleveland Indians and the Cubs, outside Progressive Field early Thursday, Nov. 3, 2016, in Cleveland. (AP Photo).

A few days ago, when the Cubs tied up the World Series at three games apiece, I stopped talking about it, this whole Cubs thing. I stopped liking my friend’s pro-Cubs posts on Facebook; I stopped reading the prognosticators prognostications; I shut down. Because something had to go wrong. There would be a goat or a random fan’s hand interfering, something would happen because good things don’t happen to Cubs fans. I have 108 years of evidence to back me up on that. So, something was going to go wrong, and so I did what I always do in a crisis, I froze.

I try not to be superstitious—for the love of God (and I mean that literally), I am a priest after all. But when the Cubs come as close as they have ever come in my or any other of their living fans’ lifetimes to winning a World Series, you get out Shamrocks, your stop walking on crack’s in the sidewalk and you start reading the bones.

And it was surreal enough that they were there—in the World Series. No, that was not a pipe for René Magritte. How could this be baseball in October when it includes the Cubs? There’s a sense of discordance produced when something you have spent your whole life hoping for—while never truly believing that it would happen—happens. There’s a brief existential resistance to that “new,” however great that new might be because, you know, it’s always been like this, the losing, the waiting til next year. The Cubs not winning was a lot like mashed potatoes and macaroni and cheese—you know, like they say those last few moments before you freeze to death are—comfortable and cozy.

And then they won.

The Cubs won the World Series—and I can’t believe I can type that statement in a non-fiction piece.

I officially became a Cubs fan when I was 10 years old. It was not that I hadn’t rooted for them before then, rather it was the first time in my 10-year-old consciousness that they were major contenders for my devotion. They had made it all the way to the National League Championship against the San Diego Padres. My fidelity to the team began, not with a particular moment in a particular game but rather in Mrs. Paselli’s Buick Skyhawk as she carpooled the neighborhood kids to school one October morning.

As I root, root, rooted for the Cubbies in the backseat, I was told in no uncertain terms by my classmate, Louis Passelli—the son of the aforementioned Mrs., who bore more than a passing resemblance to a miniature Paulie Walnuts from The Sopranos—that I was a “fair weather” fan; that is, I was only a Cubs fan because they were winning, just as I had been a fan of the White Sox the previous season when they had made it to the American League Championship. Louis made it abundantly clear, then and there, in the backseat of his family’s station wagon that I had to pick a side, and there was no turning back. As I sat on the brown Naugahyde bench seat, I had to vow, through thick and thin, good times or bad, for better, for worse, you get the idea…. I chose the Cubs, and on that October morning in 1984, I began one of the longest committed relationships of my life.

Now, let me clarify: Baseball isn’t my thing, really. I can list off the top of my head dozens of friends and relatives who are far more knowledgeable baseball fans than myself. I played one year of Little League, where the first time I was up at bat, my 8-year-old self swung three times and missed three times; whereupon I was taken aside by the team’s pitcher and the coach’s elder son (as it always is), P.J. Panico, and told not to swing at the ball but to wait for the walk. I took him at his word and never swung at a pitch again. Ever. So, no, I am not Mr. Baseball, all due respect to Ernie Banks. And so, I have only known the sport through the lens of the Cubs. I would never say I love baseball, but I would definitely say I love the Cubs.

So much of my life has been tied to this team. Trips with my grandpa as a child on the Ravenswood “L” train down to the Belmont stop, cheering for Ryne Sandberg and Leon Durham. Drinking Irish coffee with friends to stay warm on a particularly freezing home opener in the 1990s. Taking afternoons off from class in college to cheer on Sammy Sosa. The “almost” season of 2003, where I also happened to be on the cusp of deciding to enter the Jesuits and looking for a sign and wondering if the “Steve Bartman incident” was that sign from God. The Cubs have always been there, always “almost,” always “wait ’til next year,” always my pinstriped touchstone of hope.

Indeed, the Cubs are always with us, but now they are losers no more; they are champions.

I don’t know if I can take it.

Correction: Nov. 4, 2016
A previous version of this article stated the Chicago Cubs faced the California Angel in the 1984 National League Championship. The Cubs faced the San Diego Padres that year.
More: Sports

Jake Martin, S.J., is a theology student at the Jesuit School of Theology of Santa Clara University, Berkeley, Calif., and the author of What’s So Funny About Faith?: A Memoir From the Intersection of Hilarious and Holy (Loyola Press).