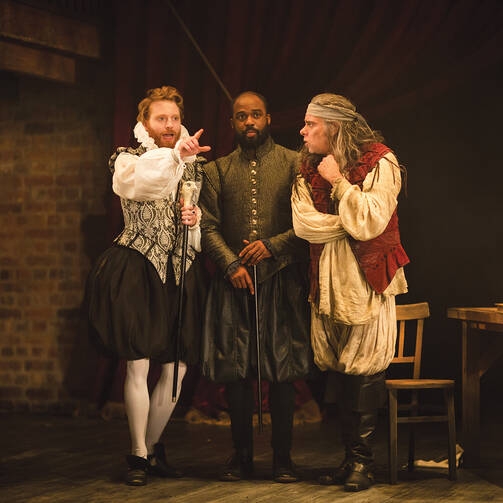 Ben Jonson will forever live in Shakespeare’s shadow. The recent production of Jonson’s best-known work, The Alchemist, by the Royal Shakespeare Company, inadvertently demonstrates why. First performed in 1610 and full of then-topical political references, it is hard work for an audience today. Although few of Jonson’s surviving works compare well with the Bard’s, this one probably does so best. That the R.S.C. put on this show at the Barbican Centre, in the City of London, also added a touch of modern-day drama.

Jonson set his play in Jacobean London—in Southwark and Blackfriars—in real time. It represented the realities his audience was living through, and they would have recognized this at once. One of those realities was the insecure reign of James I, who had succeeded to the throne on the death of Elizabeth I in 1603, and who had survived a credible assassination attempt in November 1605, known as the Gunpowder Plot. James had dashed the hopes of his Catholic subjects, later widely accused (as were, by some, the Jesuits) of planning the plot. “The Alchemist” calls to mind the more subtle sub-plot of Shakespeare’s “Macbeth,” which explores the moral justification of the assassination of an unpopular king. Jonson could not manage the master’s subtlety. Still, the bourgeois property-owner character in “The Alchemist,” the wealthy Lovewit, a character who is absent for most of the action, might have been intended to be a semi-flattering figure of the just and honorable monarch, whose underlings/subjects stood accused of all manner of delinquency. These were precarious times to be a playwright.

Another reality at which those Southwark audiences would have roared was the plague, a common disease in the early 1600s. Jonson’s plot carries really only one strand: Lovewit abandons his townhouse during an outbreak, leaving his trusted butler, Jeremy, in charge. But the latter soon makes mischief. Renaming himself Face and working with two con-artist accomplices, Subtle and Dol Common, he makes the empty townhouse a place to prey on gullible London figures to whom they promise wealth and power through alchemy, astrology and appeals to vanity. Moral collapse into anarchy is the result. Successive characters are all too ready to believe that their base metal can be turned into gold and all too willing to part with their cash. It all begins to fall apart, of course, as does the flimsy relationship among the three swindlers. In good time, the noble Lovewit returns and good order is restored. Yet the unfaithful butler appears to get away with his deception. Or does he?

Early-17th-century London could be a dramatic place to produce drama, as it is in the early 21st century, but for different reasons. Fifteen years ago, the R.S.C. made the controversial decision to move out of their unloved London base at the Barbican. The venue is an object of contention; it is a 1980s Brutalist complex situated in the City of London, the financial district known as the Square Mile, comprising two theaters, a concert hall, numerous performance spaces and apartment housing. In places, it feels like a post-apocalyptic nuclear shelter. The big theater was specifically designed for the R.S.C., yet they left in 2002, maintaining a permanent home only in Stratford-upon-Avon while mounting one-off, commercially attractive shows in the West End. More recently, abandoning their permanent, custom-designed home has seemed a comedy of errors, and now they are back. “They have their exits and their entrances,” suggested Shakespeare, but the company that bears his name has agreed to stay in its concrete home until 2020.

The London production of “The Alchemist” begins with promising originality. A playful musical overture, played by live but unseen instrumentalists, sets the tone by sampling, inter alia, the theme songs of “Mission Impossible” and the James Bond movies. The candle-lit set is open and static (until the striking, brilliant ending), resembling a brown Dutch interior or still-life.

The parallels with our own vanities and gullibility are not rammed down our throats; again, the clever ending takes care of that. Yet this 400-year-old play does not allow us to forget how difficult it is to dismiss entirely those email scams from exiled princes and widowed benefactors in far countries who have named us in legacies or deals that promise us millions beyond our imaginations. What if, a little voice still says to us, this mail is unlike the others, and genuine?

When we went to the Barbican to see this play, the company seemed subdued prior to the intermission. The dialogue, at times turgid (suffering again by comparison with Shakespeare), felt labored, and there was little of the stagecraft for which the R.S.C. is usually praised. In the manner of a sports team that has been given a firm tongue-lashing by their coach at half-time, they upped their game and were much more lively in the second half. It was all much funnier. There was an excellent theatrical explosion that, although you could see it coming, still made the audience jump.

It was a good directorial decision to cut almost 20 percent of Jonson’s text. It is sometimes held that Jonson’s prolixity came from his desire to match Shakespeare, but he tried to do it by volume rather than quality. He could not really write in iambic pentameter, let alone produce layers of meaning in a concise, nicely turned phrase. It has mostly been a strength of the R.S.C. not to rely on big stars, Hollywood refugees. Ensemble is a forte of this company. Yet Siobhan McSweeney, as Dol, and Mark Lockyer, as the eponymous alchemist, caught the eye, mostly undefeated by dialogue that cannot have been easy to learn, let alone speak aloud in a large auditorium.

And that ending. Purists did not like it, for it tinkered with the text. Jeremy the butler, played by the wonderfully nimble Ken Nwosu, stepped to extreme front-center, flourishing tickets for the play we had just watched. He recited the prices of the tickets as if to say, “You’ve been conned.” The irony that the house was less than full was hardly his fault. Behind him, the splendid set disintegrated to leave bare the behind-the-scenes bits and the crew, which we do not traditionally see. It has all been a sham, this said. But even that clever device, trying hard to vindicate Jonson, could not hold a candle, if you will, to how Shakespeare the master achieved this—“If we shadows have offended....” And so Jonson, candle-lit, remained in Shakespeare’s shadow.