A View from the Edge: You can’t turn away from Ivo van Hove’s vision. 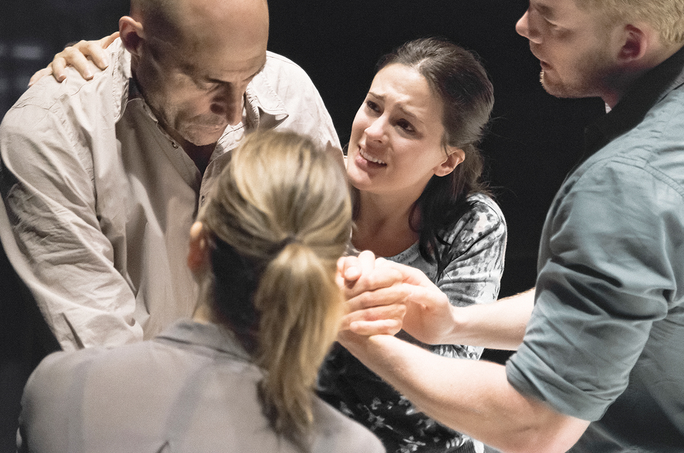 Mark Strong and company in “A View From the Bridge” (photo: Jan Versweyveld)

The Belgian-born, Dutch-based theater director Ivo van Hove has become something of a New York fixture in the last few decades, in large part for his stark, cobweb-clearing, Off-Broadway stagings of classics by Tennessee Williams, Eugene O’Neill, Henrik Ibsen, and Molière. For many critics and audiences, van Hove’s work is an irresistible mix of European Regietheater—the practice by which continental directors radically rethink classics with scant regard for original authors’ intentions—and careful, even reverent reinterpretation. Van Hove’s genius would seem to lie in changing familiar plays utterly without changing a word.

That is certainly the trick he pulls off with his mesmeric, needle-sharp staging of Arthur Miller’s A View From the Bridge, which marks the director’s Broadway debut (at the Lyceum Theater through Feb. 21). The play’s 1950s Brooklyn waterfront setting is here only suggested by the accents, well rendered by a mostly British cast (the production is an import from London’s Young Vic). The players are otherwise dressed in casual contemporary clothes, sans shoes or props, on a clean, black-and-white set with a single entrance and low benches on three sides.

Thus stripped to its essence, this painful family tragedy—in which longshoreman Eddie Carbone (Mark Strong) exerts tight, inappropriately obsessive control over teenaged Catherine (Phoebe Fox), the orphaned niece of his wife, Beatrice (Nicola Walker)—throbs with undeniable intensity and inevitability. Maybe too much, in fact. Held up to such an unblinking light, Miller’s play looks neither as tight nor as clean-lined as van Hove’s staging. And while the three leads, in particular Strong and Walker, etch memorable portraits—he with a chilling long stare, she with a wide-eyed, barely concealed terror—it is hard not to recall fondly Gregory Mosher’s more straightforward staging on Broadway in 2010, which starred Liev Schreiber, Jessica Hecht and Scarlett Johansson. Miller, with his explanatory excesses and naked stabs at tragic significance, may always feel more at home in that kind of slow-cooked naturalism, rather than skewered on van Hove’s bright-lit rotisserie.

Still, there is no question it is a transfixing, almost pugilistic spectacle, and it will be fascinating to see what the director does with his next Broadway production later this month, a staging of Miller’s better-known play “The Crucible.”

Meanwhile, back at his de facto Gotham home base, Off-Broadway’s New York Theatre Workshop, van Hove recently ventured into uncharted territory, for him and for his central collaborator: a new musical with songs by David Bowie and a script by Bowie and the Irish playwright Enda Walsh. The result, Lazarus (through Jan. 20), is no less transfixing a spectacle than “A View From the Bridge,” but for all the wrong reasons. Attempting to shoehorn some old and some new Bowie songs into a bleak, disjointed narrative about a rich alien gone to seed in a Manhattan penthouse—the script is billed as a sort of sequel to the 1976 film “The Man Who Fell to Earth,” in which Bowie himself played the earthbound alien—Lazarus is the kind of deep-dish disaster that happens when really interesting artists have a very bad idea and commit their utmost to its realization. They drive this wobbly vehicle all the way off the cliff, in short, and while there can be an awful beauty in a flaming car crash, it is still a car crash.

So we get the deep-voiced, mildly disheveled Michael C. Hall in the Bowie-alien role, writhing about the stage, nursing a gin bottle and mustering a fair imitation of Bowie’s odd, swirling baritone. We watch a depressive waif (Cristin Milioti), ostensibly his housekeeper, spiral into an identity crisis, during which she sings the revolutionary Bowie hit “Changes” while, yes, changing into a blue wig and a tiny dress. We follow a psychopath (Michael Esper) as he slices his way through New York nightlife for mysterious and apparently otherworldly ends. Worst of all, we are offered a teen ghost (Sophia Anne Caruso), on hand to haunt Hall’s alien with cute non sequiturs and a Broadway-kid voice.

The live band, encased behind glass, sounds mostly terrific, particularly on a few new Bowie songs. But the show’s music would register more strongly if it had, you know, any theatrical reason for being. Instead, the songs here are mostly excuses for van Hove and his designer, Jan Versweyveld, to keep things visually popping. Tal Yarden’s all-encompassing video design is a particular standout, especially in a mind-blowing, double-vision scene in which a projected, prerecorded Hall trashes the set, while the real Hall sits and watches on the same undisturbed set.

It is impossible to be bored, it seems, at a van Hove show, whether he is exposing the seams of Arthur Miller or creating what are essentially theatrical music videos for Bowie songs. “Strange fascination fascinating me,” goes one famous lyric of Bowie’s “Changes”; and if that tautology neatly sums up the self-enclosed world of “Lazarus,” it also suggests the unique niche this Belgian innovator has carved out on American shores.