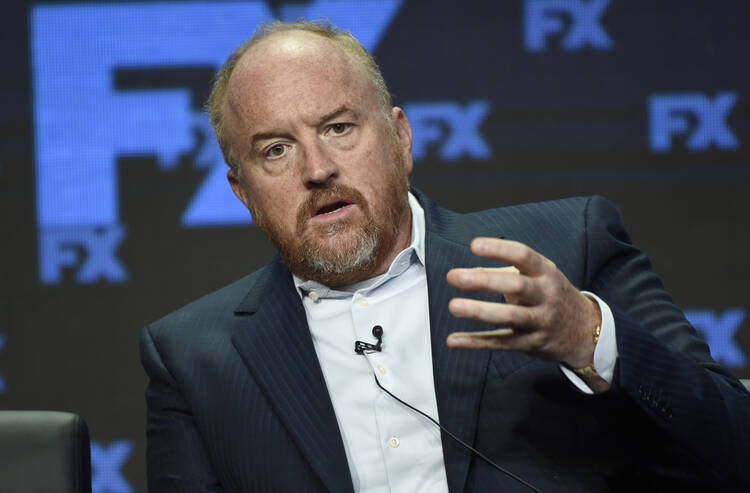 St. Augustine was a comic genius. Is there a funnier one-liner in all of theology than his prayer in the Confessions, “Lord, give me chastity, but not yet”? He was high-minded but rangy, embracing sexual and scatological humor in City of God, where he notes with no little envy that “some have such command of their bowels, that they can break wind continuously at pleasure, so as to produce the effect of singing.”

A prime candidate to be named Augustine’s comedic heir today is Louis C.K., whose sitcom “Louie” has now completed five seasons on FX and who has recorded numerous standup specials. Both the show and Louis C.K.’s act plunge deep into TV-MA territory, yet rarely in a way that seems gratuitous. Like Augustine in that prayer, the comedy of the 47-year-old Louis C.K. paints a picture of a man who can see the moral order of things but cannot will himself to act in accordance with it. Louis C.K. jokes, for example, that he should offer his seat in first class to the uniformed soldier flying to a combat zone, but he convinces himself that just by having that thought, he’s the moral hero in the cabin. Actually getting up out of his seat would be unnecessary.

Louis C.K.’s comedy argues that, at times, we are all this laughably weak-willed and self-deceptive. Our ideals can be sublime, but our fat, failing bodies betray us; and this condition begins at birth. Augustine’s doctrine of original sin is of a piece with his conviction that “the only innocent feature in babies is the weakness of their frames; the minds of infants are far from innocent.” Or as Louis C.K. puts it in his hour-long, stand-up comedy special, “Live at the Comedy Store”: “Babies are selfish. No baby ever goes, ‘Waaah! But how are you doin’ though?’”

In analyzing the nature of sin so carefully, Louis C.K. (whose Hungarian surname, Székely, is pronounced see-kay) is doing something different from other comedians with Catholic upbringing and sensibilities. He is not simply making good-guy jokes about Mass, nor is he eviscerating belief. Louis C.K. is doing something more radical; he is doing theology.

In a monologue on “Saturday Night Live” last year, Louis C.K. joked about the shortsightedness of many atheists, who look around for God and become convinced he doesn’t exist because they don’t see him. He isn’t in plain sight, and they don’t think to search for him, as Augustine did, in the less-obvious places. Louis C.K. asks atheists, “Did you look in the downstairs bathroom?” In a bit recorded for his sitcom “Louie,” Louis C.K.’s analysis of the binding of Isaac—in which he describes God as like a bad, capricious girlfriend to whom the long-suffering Abraham remains faithful—is on a level of insight somewhere between Woody Allen’s and Kierkegaard’s. Of course, neither this impatience with smug unbelief nor this acute biblical interpretation means that Louis C.K. is himself a believer. He is an avowed agnostic, but he seems to believe just enough to continue seeking understanding. Through his work, he often points out the connection between the good, the true and the beautiful—a connection that we, fallen humanity, often refuse to accept.

As the head writer for “Louie,” Louis C.K. has contributed to one of the most convincing arguments for premarital chastity I have ever heard. In this second-season episode, Louis C.K.’s character, Louie, a fictional version of himself, is invited onto a late-night talk show to debate with a young Christian on woman the pros and cons of masturbation. (He’s pro.) Later, he meets up with the woman again for a drink, and she sits with him on her hotel-suite couch and imagines aloud what it could be like if they fell in love but never touched each other. Their romance could smolder and grow, and on their wedding night they could have a kind of sex “where there’s no shame and there’s no fear, where you can put all of yourself into a woman and leave nothing behind. Just you and me, you and your body, me and my body, touching, being close, before God.”

For Louie, the argument is a turn-on. And why not? She is describing something sacramental. Grace should make us desire it. But we rarely desire it properly. The character exemplifies this as the camera cuts away from the conversation, and we see next that he has escaped to the hotel bathroom to attempt the very act he has just been debating on television.

In this way, the comedy of Louis C.K. plunges into moral depravity in order to discover its illogic. By contrast, George Carlin’s comedy understood sin only on a third-grade level, as an action that breaks the (to him, absurd) rules. In Louis C.K.’s comedy, sin is perverse desire. It is a profound Augustinian thread. Following it leads to some of Louis C.K.’s best insights but also to his darkest and most questionable material, as when he speculates about the moral calculus behind bestiality, child molestation or murder in an imagined society in which killing someone is just a misdemeanor. You wouldn’t want Louis C.K. headlining the Knights of Columbus dinner, but then, you might not want Augustine there either.

Augustine saw a way out of sin, of course. His rigorous examination of conscience leads to his awareness of a need for God’s grace. And knowing that God has already bestowed that grace is a cause for joy. Louis C.K.’s comedic universe does not include supernatural grace or a city of God. The God of his comedy is appalled at our ingratitude. As Louis C.K. joked about the afterlife in a monologue for “Saturday Night Live,” God must be thinking that he created this entire universe for us and can’t believe we expect another, even better place where we live forever too.

In Louis C.K.’s comedy, grace is instead shared between parents—or parent-figures—and children. Both his sitcom and standup act have evolved as his two daughters have grown up and as he rethinks his own childhood through the lens of theirs. The pinnacle of grace in his comedic world often comes in moments when we acknowledge a moral failure and the other person acknowledges that we knew what was right but weren’t strong enough to do it. During an interview on NPR’s “Fresh Air,” Louis C.K. describes such an encounter in his own life.

It happened when Louis C.K. was a teenager who used drugs heavily, which led to a meeting with a social worker. This man offered Louis C.K. “a clean slate.” As Louis C.K. explains in the interview, “It’s like what Catholics look for from confession: a place to just say, ‘Look, I’ve done all this bad stuff.’ And then [the priest] can say, ‘Yeah, I get it; it’s the kind of stuff that people do. It’s not the end of the world, and by the way, you were handed kind of a bad deal, so I get it. Try—try harder.’”

Jonathan Malesic teaches theology at King’s College in Wilkes-Barre, Pa. His writing has appeared in The New Republic and The Chronicle of Higher Education. Twitter: @jonmalesic.

@jonmalesic
Show Comments (
5
)
Comments are automatically closed two weeks after an article's initial publication. See our comments policy for more.
Rebecca Krier
7 years 6 months ago
I'm so glad America published this. Excellent insight into Louie... I always felt that his comedy had a deeply theological bent to it. Important lesson that what can appear on the surface as vulgar in our culture is actually profound.
Richard Booth
7 years 6 months ago
Unfortunately, Augustine and some other Church Fathers (as well as some contemporary clerics) have committed almost unforgivable errors when they created a theology that reduced the Faithful to a bunch of obedient dunces by foisting their notions of eternal damnation (something the brain cannot really grasp) and deep inner fear about extensive lists of sins we need to be walking on eggs to avoid committing. Count the sins people can commit. It's astounding. Humans frightening and threatening other human beings is not my conception taking care of the flock. Fortunately, the clerical caste has seen its high point and not many people really comply any more. I think this is one of the issues Francis is grappling with now.
Henry George
7 years 5 months ago
James, Not sure if you really have a firm grasp on Augustine. If we are damned, it is through out own selfishness not through any act on God's part.
Richard Booth
6 years 10 months ago
I am not referring to God here; I am referring to Augustine's harsh teachings.
Henry George
7 years 5 months ago
Nice to see Augustine and his thought given modern relevance. Augustine is the rare theologian who was also a pastor/bishop. He knew the proclivities of humans to be selfish in the worst possible ways but then he accepted as CK did, that God will give us the grace to change if we humbly ask for it.