Catholic Imagination Attacked by Skateboarders Part the Third: "Catholic Literati: The Next Generation"; or Whoever Named this Panel Wasn't Going to Be Sitting On It 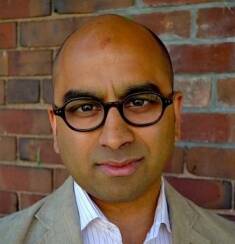 At "The Future of the Catholic Literary Imagination" conference, the most dynamic panel for my money was the one entitled "Catholic Literati: The Next Generation." (Given this title, I feel for the three men who made up the panel, Randy Boyagada, James Matthew Wilson and Josh Hren. I am almost certain that, similar to the word "hipster," no one would ever use the term "literati," to describe themselves. As in, "Yes, I am a member of the burgeoning Catholic literati. We are meeting for a poetry reading at Uncommon Grounds after Vespers this Wednesday. Would you like to come? I can get you a non-member's pass.")

The panel overcame its disturbing title and unleashed a "spirited discussion and debate." The debate was at its most spirited when it brought up the issue of "fighting fiction with fiction." (I am not sure if that phrase was meant entirely seriously.) Serious or not, the larger point was that there are ways in which faith-based arts can act as a certain Christian bulwark within the secular culture.

I asked the panel for a clarification. For me, I said, my job as a writer was simply to get down to reality as closely as I could. To tell the truth of experience as best I can. (Or, I might have said, to simply tell a story well.) Could a story or poem really be fashioned with the purpose of securing a cultural edge?

I do not remember the entirety of their response. One of the panelists referenced something I had said the day before about raising standards within Catholic literature. Don’t we need to have a measure for those standards? he said. (Using my own words against me! Well played!) The measure, if I am recalling this right, has to do with the basic truths of the Catholic faith. He went on to say that I was in a culture war. I was in one whether I wanted to be or not, or whether I acknowledged it or not.

For years I had heard this phrase—culture war—but was never precisely sure what it meant. After the session ended I asked the panelist, a publisher at a Catholic press, to tell me what the culture wars were. What is the territory, where the weapons, what the prize, where the armistice if even in sight or even possible. He tried to explain it to me. He talked about abortion as its initial western front. It had gotten broader though. There was relativism and secularism. He used the word agonistic. (Agonistic. It sounded like the experience of being held captive by a sentimental madman and forced to listen over and over to the greatest hits of the 70s band Bread.)

No, it was not this. It had to do with conflict, he said. He was slender, this editor, and patient and kind and his blazer seemed ill-fitting and out-of-date in some kind of appropriate way. I sensed a wife at home in a pale blue blouse kneeling on a cement floor making wood etchings of medeival saints. Hens in the backyard, a goat. Fresh milk daily for the three kids, Shadrach, Nyssa, and a’ Kempis. We were all in a culture war, whether we knew it or not or acknowledged it or not. We had all been drafted, our lottery numbers were low, we all had perfect health. We were needed on the field.

As I said in the first post, it was encouraging to be around people who took their writing seriously—some of whom, like me, were probably more fond of books more than they were of most people—and took their faith seriously. There was much talk of Catholic literary lights we all loved, such as Hopkins, Dante, Dillard, O'Connor, Hansen, O'Connor, Greene, O'Connor, Rodriguez, Mauriac, Merton, Morrison, Foster Wallace, O'Connor, Percy and O'Connor. One of the great moments of the conference was the presence at lunch one day of an elderly man who was dressed up exactly like Sherlock Holmes: the plaid deerstalker, the houndstooth vest, the curved pipe. I was baffled by him. I loved him. The Lord moved in him.

Before a talk in the chapel by Ron Hansen (Mariette in Ecstasy, Nebraska, Atticus) women played instruments and sang Latin songs. It was stunningly beautiful. No one understood a word of it. No one, that is, except, I imagine, the writer in attendance who lived with his wife and nine kids on a farm in remote southwestern Wisconsin. He home-schools the children (but not, as far as I could tell, in a bunkerish kind of way.) As part of their course of studies he teaches them, primary grades on up, Latin and Greek. And they like it. (And they actually do—he was clearly not the sort of guy who would sling false p.r. about anything.) So, he probably understood the Latin. I didn’t. Which was fine with me—the music was lovely enough.

In the end there were no neatly-tied up conclusions about Catholic writing. But there was a thread that came through over and over in the sessions. You're Catholic, you write, it shows up. It is a good thing. Even if you write about carburetors, and even if you don't compare them in some way to Dionysus the Areopagite, and you are a baptized Catholic, you are (usually) a Catholic writer. It is a good thing and it matters. And we want more of it.

A few days after the conference, I thought about my question to the Literati panel. In the future I might have said something different. This was because, I remembered yet again, I was not in the writing game merely to get down to the truth of experience and tell good stories. It was deeper than that. Surely it would be exciting to be an arch post-Christian who believes all-religions-say-the-same-thing and every idea has its validity while writing faintly nihilistic screeds, monologues, stories and plays spitefully celebrating all the things in the world that “God” is not happy with. (I am from the midwest. The God of the midwest still descends into unhappiness.) The fact is, though, I work in the arts to share the faith, to glorify God. There is no getting around it.

But also know that I am not skilled or clever enough to do this by writing a story or play whose naked intention is to advance the faith and glorify God. I have written too much fiction that tries to champion a cause—labor unions, the faith, “the poor”—and it almost always ends up poorly. It comes off more as a speech, a polemic than an honest accounting of what is.

Perhaps someday I will be able to pull off such a trick of evangelization. But for now, all I can do is just get down to the truth of things and tell a good story; even stories that are about nothing explicitly Christ-centered at all. Tell the truth and trust that God can do the rest. Evangelizing in the end is not my work. It is God's.