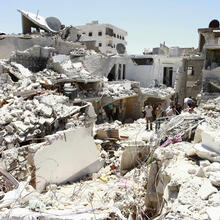 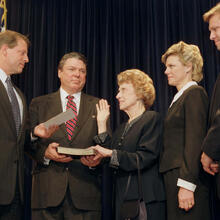 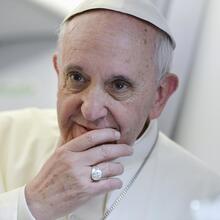 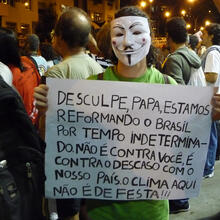 News
Pope Urges Dialogue and 'Social Humility': Recommends a 'culture of encounter'
Catholic News ServiceJuly 28, 2013
"Today, either we stake all on dialogue, or we all lose," Pope Francis said.

News
Pope with Parting Advice for Bishops: And a global commission for WYD participants
Catholic News ServiceJuly 28, 2013
Acknowledging the Catholic Church's heavy loss of members in Brazil over recent decades, Pope Francis told the country's bishops that they must learn to understand and sympathize with the reasons for people's disaffection and speak to them in a simpler language of beauty, mystery and lov 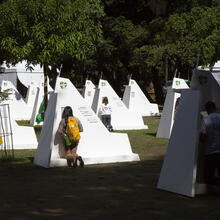 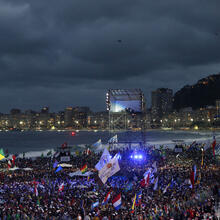 News
Pope Invites Young to Follow Jesus: One million young people attend celebration on Rio beach
Catholic News ServiceJuly 26, 2013
RIO DE JANEIRO (CNS) -- Even at its stormiest, the Sea of Galilee doesn't have waves like those pounding Copacabana beach, but Pope Francis asked young Catholics to imagine they were with Jesus on the seashore and he was asking them to follow him and share his love with others.In his first remar 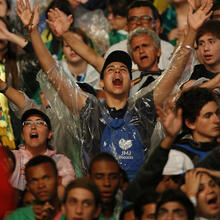 News
Security Concerns Raised at WYD
Catholic News ServiceJuly 24, 2013
The cancellation of a scheduled popemobile ride through a working-class neighborhood suggests that, despite official assurances, Pope Francis' chaotic entrance into the city on July 22 may have raised concerns among those responsible for his safety during his first international trip as pope.&nb 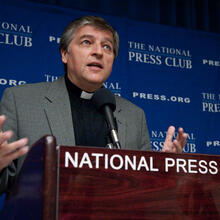 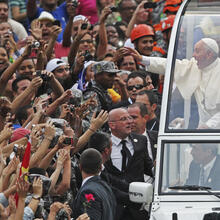 News
Rio Crowds Swarm Pope Francis
Catholic News ServiceJuly 22, 2013
Hundreds of thousands of cheering people welcomed Pope Francis to Brazil July 22 as he made the first international trip of his pontificate to his native region of Latin America.The papal plane touched down at Rio's international airport at 3:43 p.m. local time, and the pope emerged 18 minutes l