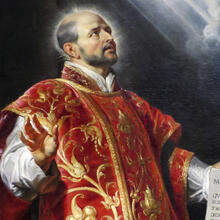 FaithIn All Things
A Jesuit Pope? What Does that Mean?
James Martin, S.J.March 16, 2013
An answer the question I’ve been asked for over two decades: What’s a Jesuit anyway?
Arts & CultureBooks
A God worthy of belief
The book grapples with the biggest of issues: the meaning of life, the problem of evil and the value of praying to a God who seems only rarely to intervene in human affairs.
Pope Francis
Cardinal Jorge Mario Bergoglio of Argentina, became the first Jesuit Pope when he was elected on March 13, 2013. In the time since his election, Pope Francis has made his mark on the modern church. As David Gibson notes, Pope Francis has called us “to reform ourselves in order to convert others.” From declaring a Year of Mercy, to writing Laudato Si, the encyclical on caring for the environment, Pope Francis is making his mark on the Catholic Church.
Pope Francis in Myanmar and Bangladesh
Pope Francis will be visiting Myanmar and Bangladesh beginning on Monday Nov. 28. He is the first pope to visit Myanmar, a majority Buddhist country of some 55 million people. Under Daw Aung San Suu Kyi, a Nobel Peace Prize winner and the country’s top civilian leader, Myanmar has been the target of human rights groups who say the country is engaged in a campaign of ethnic cleansing against some one million Rohingya migrants. How Francis addresses this issue will be closely watched. On Nov. 30, Pope Francis will fly to neighboring Bangladesh. Eighty-seven percent of its 156 million people are Muslim. Christians are a tiny minority of 600,000 believers, 350,000 of whom are Catholic.
Pope Francis in Chile and Peru

Pope Francis set out on his 22nd foreign trip on Jan. 15, a visit to Chile and Peru that offers a number of daunting issues for him to address—from the plight of indigenous peoples, the condition of migrants; the urgent need to address poverty, inequality and corruption and the state of the environment to the question of the sexual abuse of minors by priests in Chile and lay leaders in Peru.

It is Francis’ sixth journey to Latin America since becoming pope. He travels to Peru on Jan. 18 and will return home to Rome on Jan. 22.