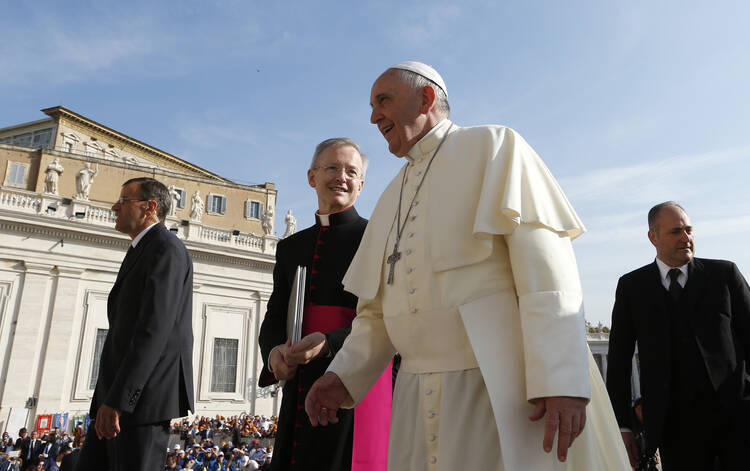 The Synod of Bishops on the Family is now underway at the Vatican. Pope Francis, the bishops, clergy and laypeople will meet for two weeks (Oct. 5 - Oct. 19) to discuss pastoral challenges to the family. Keep up with America's daily coverage and analysis here.

The Urgency of Pastoral Outreach: How do we make the goals of the Synod of the Family a reality? Helen Alvaré (7/21)

The "instrumentum laboris," or working document for the coming October Synod on the Family, is a rather overwhelming wish list of pastoral outreach initiatives that the universal church hopes the local church will undertake more fully and better than before. Read more.

Love Me Tender: The synod calls us to consider the vocation of the Christian family, Valerie Schultz (7/20)

We have an openhearted role model in Pope Francis, who embraces the world in all her tawdriness and tells her, sincerely and tenderly, that he loves her and God loves her. He reminds us that we all are capable of, and called to, great joy. Love first; ask questions later, he seems to say, which the document calls the pope’s “pastoral creativity.” Read more.

Pope Given Standing Ovation at End of Synod (10/18)

Synod on Family Closes No Doors; Absolute Majority Is With Pope Francis (10/18)

A Message of Encouragement from the Synod Fathers (10/18)

'A Stunning Change' on Stance Towards Gay, Divorced Catholics (10/13)

Synod Hears Calls for Church to Change its Language (10/7)

Pope Tells Synod Fathers: Let Us Not Thwart "God's Dream" For His People (10/5)

Francis: Synod Fathers Must 'Listen'; Do 'Whatever' Jesus Tells Them (10/4)

Cardinal Baldisseri: Bishops At The Synod Should Speak Freely, Clearly And With Courage (10/3)

Cardinal Kasper: Some Fear a Domino Effect at the Synod on the Family (9/29)

Fourteen Married Couples Among 253 Participants at Synod on the Family

Talking About Marriage and Family

The Nuclear Option: A call to refocus on the love between a man and a woman, Cornelius F. Murphy Jr.

Raise Up the Roof: Families with disabilities belong at the synod too, Maria Cataldo-Cunniff

Cardinal Wuerl on family synod -- and what happens next

Archbishop Kurtz on synod and next steps

Cardinal Nichols on desire and fidelity

Cardinal: Is teaching on sexuality changing?

Father Thomas Rosica of Salt & Light Television talks about the upcoming synod on the family on "America This Week" on SiriusXM.

FAQs: the Extraordinary Synod of Bishops

The Family, In Context: Reflections on the working document for the synod on the family