A Swedish Master: An American gallery revisits the work of Anders Zorn 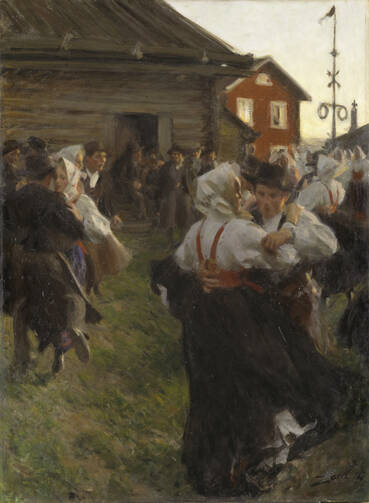 The sumptuous colors, dazzling brushwork and sheer drama in the paintings of Anders Zorn (1860-1920) earned the Swedish artist fortune and fame during the Gilded Age. But Zorn’s work and name gradually fell into obscurity outside Sweden. As a result, his brilliant body of work has not been shown in the United States for 100 years—until now. A major retrospective, “Anders Zorn: Sweden’s Master Painter,” which includes oil paintings, watercolors, etchings and several sculptures (90 works in all) runs through May 18 at the National Academy Museum in New York City, after a debut in San Francisco. The quality of these works ought to re-establish Zorn’s artistic reputation and reignite his popularity among Americans.

Zorn’s style has been compared favorably with that of John Singer Sargent, a peer whose oil portraits and watercolors continue to attract crowds and buyers, as well as with that of Joaquin Sorolla y Bastida, a Spanish master of light and the quick brushstroke. In Zorn’s day, his portraits were sold for larger sums than Sargent’s were; his name was better known. It would have seemed strange at that time that the American public would later come to know Sargent’s name more than Zorn’s. But history is full of surprises and reversals.

Although Zorn, the illegitimate son of a brewer, came from humble rural beginnings, his “divine gift” was recognized at the Royal Swedish Academy of Fine Arts in Stockholm, where the teenager won prizes and became a student leader. To establish himself internationally, Zorn did what other artists of the Belle Epoch had done: he traveled to exotic places and exhibited the paintings he made to the public in London and Paris. The current exhibition contains astonishing watercolors from Zorn’s early travels in Spain, Portugal, Algeria, Italy, Turkey and Cornwall, England.

He also painted scenes of Mora, his hometown, catching the dynamism of local dancers and fiddlers, showing women at work making lace, brewing beer, herding livestock and sorting fish. Zorn’s nudes, mostly of robust local women, are noteworthy for their sensuality and natural context. Strawberry blonde women wade into the water or climb out of it on rocks; mothers take children for a swim. Such natural gestures in a rural landscape contrast starkly with the artificiality of nudes positioned like statues in French art studios or made to appear as if at their toilette. In Zorn’s paintings, one can smell the water and the trees, see the sunlight or feel the chill; in a natural habitat his nudes look relaxed and at home. Viewers will find much to admire in Zorn’s rendering of water, whether sun-drenched or rushing beneath an overcast sky. Water is a subject in many of Zorn’s paintings. “Sea Study,” a postcard-sized, nearly monochrome image of sea and sky, is at once simple and riveting.

At 29, Anders Zorn had become a success in Paris, the city of artists. His works had been exhibited at the competitive annual salons; and he had won a gold medal at the World’s Fair in Paris in 1889. That same year the French state inducted Zorn as a knight into the French Legion of Honor.

Zorn began to cultivate lucrative commissions in the United States as a portrait painter. In “Clarence Barker,” one of the most charming watercolors on view, a grandson of Cornelius Vanderbilt exchanges loving glances with his dog. In 1894, at the Chicago World’s Fair, Zorn befriended the Boston art patron Isabella Stewart Gardner, whose visage appears twice in this exhibition. In Zorn’s oil portrait of her, an exuberant Gardner, dressed in a long white gown, bursts into a room through a pair of French doors as fireworks light up the night sky behind her. Gardner is also the subject of a small etching, rather static by comparison. Taken as a whole, however, Zorn’s etchings are one of this show’s liveliest surprises. These small monochrome works—some dashed off in lines that throb with life, others intricately hatched, mysterious and dark—depict the over-sized personalities of Theodore Roosevelt and the sculptor Auguste Rodin, among others. Zorn perfected his etching technique, he said, by studying the works of Rembrandt.

Once upon a time Americans couldn’t get enough of Zorn. He visited the United States seven times, during which he painted the portraits of bankers, industrialists and their wives, and two presidents—Grover Cleveland, on view, and William Howard Taft, whose portrait hangs in the White House. Zorn also made a number of self-portraits that show how he looked at various ages, evincing his energy and resolve. In “Self-Portrait in Red,” Zorn, 55, a rudy-faced, bull of a man, stands before us in a three-piece red suit, with both arms bent and a cigarette in one hand, as though caught on his way out the door.

Anders Zorn was a creative genius, a hard-working entrepreneur and a virtuoso, but he was no solo act. Emma Lamm, Zorn’s wife, brought upper-class family connections to their union. She posed for her husband, traveled with him and for 20 years after Zorn’s death established his legacy through the Zorn Museum in Mora.

A beautifully illustrated catalogue of the exhibition published by Rizzoli, Anders Zorn: Sweden’s Master Painter, is available online and at the museum. It contains helpful essays by Johan Cederlund, director of the Zorn Museum in Mora, and several others.

Finally, viewers who wish to compare Zorn’s figurative works with the paintings of a contemporary master will not want to miss “Philip Pearlstein: Six Paintings, Six Decades,” a concurrent exhibition also at the National Academy. In these six large paintings one finds no celebrities and no natural surroundings. Rather, Pearlstein’s nudes are all carefully positioned indoors and juxtaposed with selected props. They are distinctly modern, provoking viewers to ask what makes them “modern.”

Karen Sue Smith is a fomer editorial director of America.