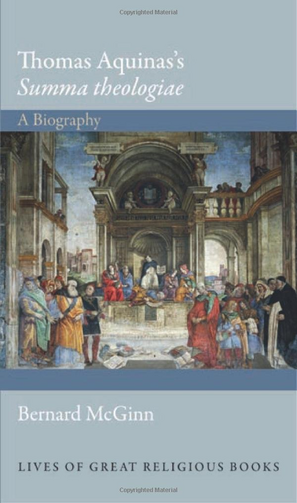 Amazon currently sells a 5-volume, 3,020 page (11.6 lbs.) hardcover version of Thomas Aquinas’s Summa theologiae for $198.46. Before you go out to buy the set and strive to finish reading through the double columned pages before Labor Day, it would behoove you to read Bernard McGinn’s fine introduction to the structure of the book, the man and the age that produced it, and the history of the book’s reception during the last 740 years. Here are some more statistics regarding the Summa (not to be confused with the Summa contra Gentiles, Thomas’s other large theological synthesis):

The work is mammoth. It is also intricately arranged, akin to the structure of a medieval cathedral. Like Chartes, a tour of the Summa can be daunting initially. Bernard McGinn is a warm and thoughtful guide to the text. Not a Thomist himself, he is free to offer an objective presentation of the man, the book and the great commentators and teachers of the book. And so, the Catholic Book Club selects McGinn’s history of the Summa for the summer months. McGinn’s short book offers a dose of medieval history, a tour of a classic theological text, a bit of counter reformation reception history, a snapshot of the modernist crisis and a presentation of the 20th century’s most prominent thinkers in the Thomistic tradition. It is also a testament to the continued influence of St. Thomas Aquinas.

Thomas’s Summa has shaped how theologians have sought to define creation, providence, incarnation, grace and theology itself. McGinn grounds Thomas’s concept of sacra doctrina or theology in three elements: holy teaching (Thomas’s sacra doctrina) is fundamentally biblical; the nature of God’s words directed to humanity in revelation are narrative and metaphorical; and the teacher of theology transforms scripture into scientific, propositional discourse (66). The initial two elements still govern Catholic theological discourse today. Furthermore, sacra doctrina seeks to cultivate both knowledge of God and promote the activities, dispositions and virtues that aid the journey toward one’s final, most comprehensive encounter with the Triune God—the beatific vision (98). The entire structure of the Summa reflects creation’s exit or emanation from God and its way of return—through Christ, charity and the sacraments. The beatific vision completes one’s return to God. Unfortunately, for us who read him, Thomas experienced some sort of physiological or mystical event (or some combination of the two, 37-38) on December 6, 1273—a hint of the beatific vision that was to come. He did not write anything thereafter, and he died after hitting his head on a tree branch while riding to an ecclesial council on March 7, 1274. His students completed Thomas’s work on the sacraments and presented what they thought to be his eschatology.

Princeton University Press has recently issued a series of books that presents the history of religious classics from Genesis and Job to John Calvin’s Institutes and C.S. Lewis’s Mere Christianity. The series commissions learned scholars to introduce the works and offer an accessible synopsis. Bernard McGinn, an emeritus professor at the University of Chicago and an expert on Christian mysticism, is an interesting choice to present Aquinas’s Summa. It seems that Prof. McGinn’s own experience as a student of the Summa in the 1960s helped inspire him to pen this biography of Thomas’s great book. Prof. McGinn was in the thick of things as a student of Bernard Lonergan at the Gregorian during the 1960s. He was well aware of the scholarship of Henri de Lubac, Karl Rahner, Etienne Gilson and Jacques Maritain as well as the controversies swirling around the normative interpretation of Aquinas’s Summa since Leo XIII elevated the Summa to become the standard text of Catholic theology with the promulgation of the encyclical “Aeterni Patris” in 1879. In fact, McGinn’s last chapter, “The Rise and Fall of Neothomism,” offers a fascinating history of Thomism in the last century and a half—from Garrigou-Lagrange and Chenu to Von Balthasar.

In short, if you have ever wondered about the Summa—its content and structure—or if you have ever skimmed parts of its articles, I recommend McGinn’s introduction. Please consider the following questions for our discussion.

1.  When you hear “Thomas Aquinas” or “The Summa theologiae,” what comes to mind? What has your experience been of Aquinas’s masterpiece?

2.  What, if anything, surprised you about the Summa’s reception during the two periods that McGinn describes: 1275-1850 and 1850-the present?

3.  Flannery O’Connor used to read parts of the Summa for her nightly spiritual reading. Does study of the Summa or any other of Thomas’s works serve to deepen your prayer or your spiritual life?

Kevin Spinale, S.J., a Jesuit scholastic, teaches at Boston College High School and is the moderator of the Catholic Book Club.