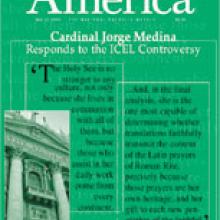 News
On the ICEL Controversy
Jorge A. CardMay 13, 2000
In the March 4 issue of America His Excellency, Bishop Donald Trautman, offered certain reflections regarding a letter that I had sent on October 26 of last year to His Excellency, Bishop Maurice Taylor, in his capacity as Chairman of the Mixed Commission for English-language liturgical translations

At Jubilee for Workers, Pope Urges Globalization of Solidarity

Celebrating one of the biggest events of Holy Year 2000, Pope John Paul II appealed for a globalization that extends beyond the economy to encompass worldwide solidarity. At the Jubilee for Workers on May 1 on the Tor Vergata University campus on the outskirts of Rome, attended by about 200,000 people, the pope called for a resolution to labor inequality and injustice throughout the world. Despite technological progress, he said, realities such as unemployment, exploitation of minors and low wages persist. He warned that the organization of labor does not always respect the dignity of the human person, and the universal destination of resources is not always given due consideration.

News
Signs of the Times
From AP, CNS, RNS, Staff and other sourcesMay 06, 2000
Settlement in Suit Against Bishop, Santa Rosa DioceseThe Diocese of Santa Rosa announced on April 24 that it had reached a $535,000 settlement in the civil lawsuit brought by a diocesan priest against former Santa Rosa Bishop G. Patrick Ziemann and the diocese. Officials said the diocese wanted to f

News
Signs of the Times
From AP, CNS, RNS, Staff and other sourcesApril 29, 2000
Chicago Archdiocese Takes Part in No Sweatshop’ CampaignChicago’s cardinal said his archdiocese has joined a national anti-sweatshop campaign because the church is called in a jubilee year to proclaim liberty to captives,’ including those enslaved to undignified working conditions.

News
Signs of the Times
From AP, CNS, RNS, Staff and other sourcesApril 22, 2000
Thousands Form Human Chain Around Capitol Against DebtThousands of Americans formed a human chain around the U.S. Capitol on April 9 to urge debt relief for the world’s poorest nations. Sign-bearing union workers, nuns and studentsmany wearing cloth or paper chains to symbolize the enslaving c

News
Signs of the Times
From AP, CNS, RNS, Staff and other sourcesApril 15, 2000
Oakland Diocesan Service Offers Apology for Clergy Sex AbusePain, anger and healing surged through an Oakland gathering as Bishop John S. Cummins and other leaders of the Diocese of Oakland publicly apologized to victims of clergy sexual abuse. More than 130 people, including survivors, their famili
Subscribe to News