The Beatification of Oscar Romero: Following the archbishop's path to sainthood

The Beatification of Oscar Romero: Following the archbishop's path to sainthood 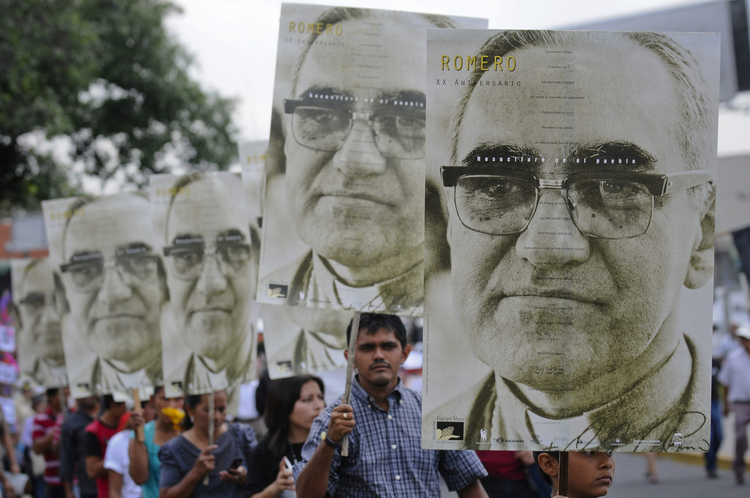 On Saturday, May 23, the martyred Archbishop Oscar Romero will be beatified, 35 years after he was assassinated while celebrating Mass in the modest chapel of Divine Providence Hospital in San Salvador. Columnist James Keane is in San Salvador and will be reporting from the ceremony for America. Check this page for ongoing coverage and dive into our collection of articles, videos, podcasts and more on the archbishop who lived and died giving voice to the poor and preaching a message of liberation to oppressed and oppressor alike.

The Ignatian Solidarity Network will be live-streaming the beatification ceremony here, at 12 p.m. ET.

Yours, Francisco
A letter from Pope Francis

Relics of the future
Tears from some hard characters.

Early Morning, San Salvador
With three hours still to go until the Mass of celebration for the beatification of Oscar Romero, the Plaza El Salvador del Mundo and the surrounding streets are filled with people,

A Holy Mess: In San Salvador with Blessed Oscar Romero (5/22)

A Prayer for El Salvador, James T. Keane (5/4)
Romero had as many enemies in death as in life, but we will not be hearing much from them. Everyone these days—even those who hindered his cause for sainthood on the grounds he was a Marxist...has nothing but love for Oscar Romero
Martyrdom Revisited, The Editors (4/13)
Óscar Romero was killed out of hatred of the faith, dying a martyr’s death—not because he was shot through the heart while saying Mass, but because he dared to make real the Gospel demands for dignity and justice on behalf of the defenseless and marginalized in El Salvador.
Death Comes For the Archbishop, Kevin Clarke (3/23)
He was wrapping up yet another memorable homily for those gathered in the church and those who would listen to his words later on the radio. “The harvest comes about,” he said, “only because it dies, allowing itself to be sacrificed in the earth and destroyed. Only by undoing itself does it produce the harvest.
Pope Recognizes that Archbishop Romero is a martyr, Gerard O'Connell (2/3)
The Theological Commission of the Congregation for the Causes of the Saints concluded that Romero's words and actions in favor of the poor and for justice were motivated by his faith, and not by political reasons.
Truth, Then Justice: Memory and healing in El Salvador, by Luke Hansen, S.J. (10/10/14)
This past summer I traveled to El Salvador as part of a delegation to mark the 25th anniversary of these assassinations, and I saw some of the many ways the country continues to suffer from the bitter fruits of war.
In the Steps of Romero, Thomas P. Rausch (10/10/14)
Sitting a few feet from the great bronze sculpture of the four evangelists lifting up the murdered archbishop, I read on the red marble slab over Archbishop Óscar Romero’s tomb the phrase Sentir con la Iglesia, generally translated as “To think with the church.”
Salvador's Saint, Richard Amesbury and Andrew Kirschman (4/26/10)
“Romero matters regardless of the generation,” says Ana Grande, 30, a second-generation Salvadoran-American who is a community organizer in Los Angeles. “For the younger generation, although they didn’t have firsthand contact, it is a remembrance of faith and justice.
A Report from Romero's Funeral, James L. Connor, S.J. (4/26/1980)
All went peacefully through a succession of prayers, readings, hymns until the moment in his homily when Cardinal Ernesto Corripio Ahumada of Mexico, the personal delegate of Pope John Paul II, began to praise Archbishop Romero as a man of peace and a foe of violence. Suddenly, a bomb exploded at the far edge of the plaza.

America Media is in San Salvador, covering the beatification of Oscar Romero. Here's our report from the Hospital Divina Providencia, the chapel where Romero was martyred while celebrating mass on March 24, 1980.

Romero as Martyr
Chief correspondent Kevin Clarke, author of Love Must Win Out, a new biography of Oscar Romero from Liturgical Press, talks about the news that Archbishop Romero has been officially named a martyr by a Vatican commission.

Remembering Romero
Pictures from the life of Archbishop Oscar Romero and from the city and people that he loved.
Memory and Healing in El Salvador
Luke Hansen, S.J., took part in delegation to El Salvador from July 24 to Aug. 1, 2014, to mark the 25th anniversary of the assassination of six Jesuit priests, Elba Ramos and her daughter Celina at the University of Central America.